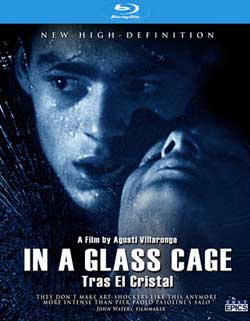 A former Nazi doctor-turned-pedophile, paralyzed from the neck down after a suicide attempt, is forced to accept a boy as his nurse under threat of blackmail: the boy secretly witnessed the doctor’s torture and murder of another boy, and possesses the man’s diary, which details his wartime experiments and his subsequent descent into pedophilia and murder. Before long, the boy displays his ambition to follow in the older man’s footsteps.

Klaus now spends his life as a prisoner of his own past. As a former Nazi doctor, he left a trail of viciousness and pedophilic debauchery behind him that lingers with him to this day. The film begins as a young boy hangs naked from rope binds hovering crucifix style as a younger Klaus takes pictures. Klaus was once an activist in torturing young boys to the sound of Nazi command. 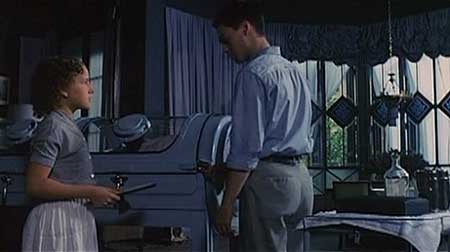 Though in later years he botches an attempted suicide by jumping from a window and leaving himself paralyzed left to live in a iron lung machine. While Klaus still can communicate, his body lives inside this iron glass cage that keeps him alive. The machine maintains his breathing by pumping his now dysfunctional lungs. 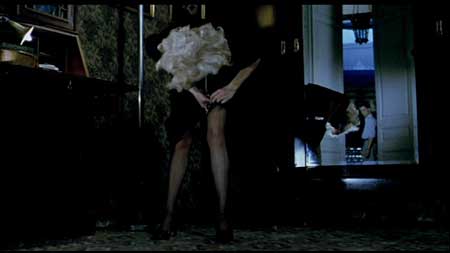 Klaus’s wife Griselda currently watches over him. She has reached a point where she wants to move on with her life and hire a nurse. The burden of constantly watching and taking care of her husband has worn thin. It is this notion that they begin to seek out a local equipped to take on the task. A young boy enters into the scene who claims he is from the hospital. While the wife is reluctant to hire him, it’s Klaus that requests he stay to take on the task. 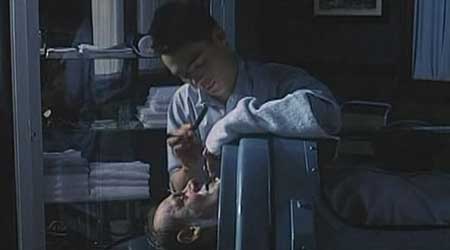 The boy who goes by the name of Angelo (David Sust) seems reserved and shy but still capable to carry out the duties. As time moves forward it is revealed that Angelo has more of an agenda than expected of which turns the tables on the family and introduces a new level of terror that they didn’t see coming. It is also revealed that Angelo has obtained some of Klaus’s diary pages which in fact document much of the war time atrocities he performed. Though Angelo begins to take on the persona of the atrocities bringing the stakes up to a much higher game. As the movie builds, its slow grind intention of revealing Klaus’s wrongdoings is demonstrated thru the actions of a partially inane Angelo who uses Klaus as a audience for reenacting some of the atrocities once again. Klaus’s daughter Rena tries to keep ample distance knowing that the household hold is now under the control of Angelo. 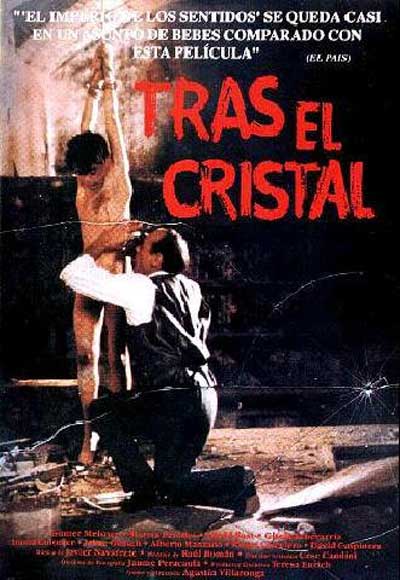 “In A Glass Cage” has often been highly regarded as a controversial movie that touches upon taboos too strong for most viewers.  It’s taboo theme incorporates the use of Nazism, pedophilia, torture and homosexuality under the guise of a abstract sort of horror film. In fact, it manages to cross several hybrid genres in its uniquely unfolding of premise. I didn’t find the film as disturbing as others it has been associated with, though it does simulate pedophilic relations which is disturbing in its own sense. The movie moves at a slow pace but uses careful framing to invoke a strong sense of gloom. 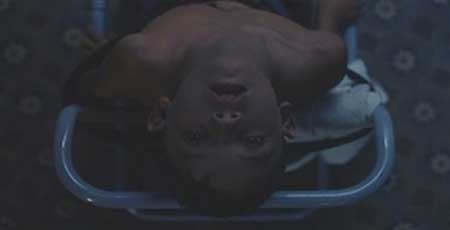 We are also made to watch as the now-obsessed Angelo begins to bring back young boys executing  before the paralyzed Klaus. Though every story has a purpose and in the final act we ultimately discover that Angelo was in fact one of the many pawns that Klaus had indulged upon. Angelo descends into his own madness becoming the new model of Klaus to the point of assuming his new place within the iron lung machine. The whole affair seems to influence the once innocent daughter Rena who is now brought into the cycle.

“In a Glass Cage” has long been considered a Spanish art house film. It’s direction is fueled by the efforts of artisan Agustí Villaronga. Though it’s knack for staying among the underground and its vicious on-screen killing of young boys has well placed it into the realms of horror for years. The movie is often mentioned in the same breath as Pier Paolo Pasolini’s 1″Salo 20 Days of Sodom (1975)”, though upon review my of film, I actually found it far less disturbing than the torture and sh*t-eating of Salo.

“In a Glass Cage” is now available on Bluray