Ki Ki Ki, Ma Ma Ma.
Camp Crystal Lake has got a death curse, and this man’s partly responsible. The composer for the original Friday the 13th score, Harry Manfredini made the sounds that made you poop a little in your jammies. One of the greatest horror films of all time, Friday the 13th brandished 9 sequels, a crossover with the Nightmare on Elm Street series, and will suffer a remake early next year. Let’s see what this pioneer of paranoia has to say about music in horror and the direction the Friday series has taken . . . 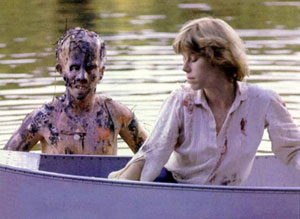 Right off the bat Harry, we have a history don’t we? Nobody believes that my Dad sang in Friday the 13th, tell it like it is.

HA HA… tell it like it is… okay… YES, your father Marty, and your Aunt Angela, and Uncle Jules, all worked on Friday the 13th with me. Back in the day, when you were just a very little boy, and I mean very little, I played in your family band in New Jersey. They all sang great. So when the situation for music on Friday required some singers, I used your family. So. When you hear the campers singing away at Tom Dooley, and Michael Row the Boat… at the beginning of the film. That is the family and me . . . singing with the film track. And, in the diner scene where Sail Away Tiny Sparrow plays that is Angela on the vocal. So there it is…

YES, there’s the proof folks! Tell us a little about your past. How did you get into music? What brought you to the horror genre?

Well, I have to confess I wanted to score films all my life. And pretty much gave up that dream until my last years at Columbia U. Where I was getting my doctorate, and the opportunity to actually make a living writing came to me. Otherwise I was going to be a teacher somewhere. Music in me is just a gift, and an attraction to it is something I could not deny. I have always been a big fan of film music, all kinds, and especially the Hitchcock films and wonderful epic scores. The horror genre I think found me, more that I found it. I was doing mostly drama and kids films, when Sean Cunningham told me he was making a film called Friday the 13th.

We’re glad he picked you. What is the importance music plays in evoking the true essence of fear in horror films?

Well that is a huge question, and would require a really huge answer. Fear is multi-faceted and can be approached in so many ways. We have the unknown, or the known. The unexpected, the strange, the dark side, the unusual, the silence, the sound, the noise, the personal elements that one takes to a film that causes fear in a few, and not in others. So when scoring a film and evoking the true essence of fear, one has to weigh and understand the type of fear that is being evoked by the film itself. Sometimes the silence is the best transmitter of this; sometimes a huge sound might be the ticket. Sometimes a simple little childlike theme can be a fearful thing when placed in the correct perspective. So it is not only the importance of the music, but also understanding the essential types of fear that one is asked to underscore. 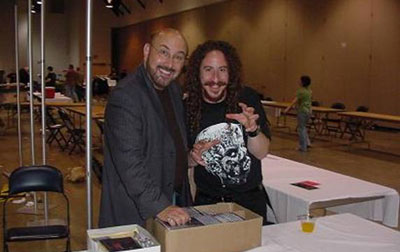 That’s Bad Ass. How do you prepare to score a horror film?

Well, first of all, I would go through and find exactly the things I talked about in the answer to the question about essence of fear. What kinds of things am I going to be asked to do? What things in the film already are sufficient, and what can I add in terms of music and sound to delineate and enhance those elements. Also, I try to come up with a particular sound specific to that film. It could be a harmonic structure, or orchestral color or melodic theme, or something that will help in telling the story in a musical sense. I like to think of them as a set of bricks from which I am going to build the house of score. I don’t really like to look at dailies. I like to see the picture pretty much in its final state because I like to get a visceral reaction to the film just like the audience will when they see it for the first time. It is important to get that. It allows me to feel and measure how the film is working and how I can enhance the over all effect of the film.

How did the infamous Ki Ki Ki, Ma Ma Ma sounds come to be in Friday the 13th?

I knew this question would come up. Ha ha . . . it was created out of necessity actually. This was a film in which the killer was in the film from the very start, but never seen. So it was imperative for me to create something so that when the camera was used in a point of view of the killer, the viewer could know when the camera was the killer’s POV, and not just the regular camera shot. So, when I got to end of the film, and I saw that close up of Betsy Palmers mouth where she says… “kill her mommy.. kill her mommy”… and it moved from her voice to Jason’s voice, I knew that she was a person who heard voices… in her head. I was also studying a composer named Penderecki at the time, and heard some choral works where consonants where pronounced in a very dramatic way. I then added the two strange bedfellows together and took the first letters of kill… KI… and the first two of Mommy … MA… and went to a microphone and said those sounds. And then echoplexed it.. And it came out.. ki ki ki ki.. ma ma ma ma.. and the rest is, as they say, history…

That’s amazing, and one of the most iconic sounds in horror was born. What’s your favorite band?

I am guessing you mean rock band. Lately I like Dream Theater… I am all over the place in terms of pop music. I like a lot of bands… some I don’t even know their name, just the sound of the recording.

Besides one of your own, what’s your favorite horror score?

Ha ha… Well, I cannot really pick one… so I would say, just about everything Bernard Herrmann has done… and then add in Jerry Goldsmith, and Williams, Bernstein, Elfman, Tommy Newman, and numerous others… 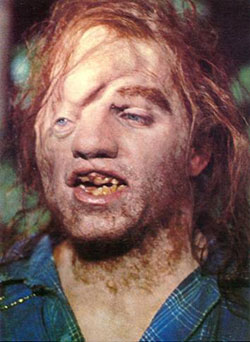 Well just go to the last question and that’s a good start. I like a lot of different composers. I was greatly influenced by Mancini as well, and the old greats like Rosza. Now if you asked me composers, I would say… Puccini, Stravinsky, Bartok, Hindemith, Penderecki, Lutaslawski, Vaughn-Williams, Bach, Shostakovich… all of whom are on my top friends on MySpace… with Stan Kenton and Maynard Ferguson.

You’ve worked on some great horror flicks as well as many non-horror movies. What was your favorite film to score?’

Well, each has there own personal attraction to me. Friday the 13th the original of course has to be a favorite. I like House, and House 2 especially because of the fun characters I got to score: a baby pterodactyl, a worm dog, a skeleton cowboy, a very strange witch, a dead Veteran,. Etc. I liked others for different reasons. So it’s hard to say. There are some I liked just doing a theme where I could make people cry… or feel. So each has their own special feeling for me. 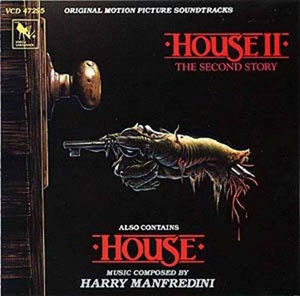 The Friday series one of the longest running film series ever, what’s your favorite Friday installment?

Do you think Jason Takes Manhattan is so sh*tty because you weren’t involved?

I never saw the film. So I don’t even know that it was sh*tty, as you put it. And I am sure my involvement has little to do with how it comes out in any way. I have heard from some people that they liked it. So I don’t really know how to answer such a question.

HAHA That was a very noble and modest answer. It’s by far the worst of the Friday films. Outside of the film industry, what’s your greatest achievement, so far?

I guess you are referring to the musical. Play me a Country Song, which I got to Broadway, albeit for only two weeks and a day. I also am very proud of all my children’s films that I have scored. Very much fun and very rewarding for me… I also have written hundreds of educational songs that have been quite successful. I guess my greatest achievement is just surviving this long. Ha ha ha

Besides Friday the 13th? Ha ha . . . I would say The Exorcist, or Frankenstein

I would say that’s a tie

Hmmmm? … Many favorites, but you know when it all is over, a nice melting scoop of really good Vanilla on a nice piece of hot apple pie…

Who would win in a no holds barred fight to the death Jason Voorhees or The Djinn from Wishmaster?

Well… the Djinn really didn’t kill people you know, he just gave them what they wished for… with a little spin. Ha ha ha . . . Jason, however, is the shark, the bomb. My money is always on the J-man. 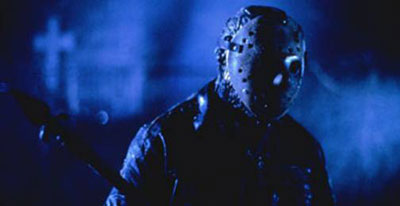 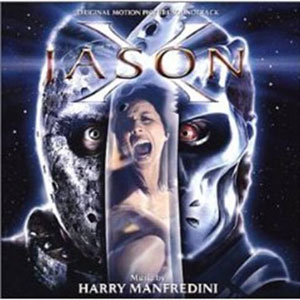 Lastly, how do you feel about the Friday remake, and remakes in general?

I guess I feel the same about all of them. They are an opportunity for a new vision and version of something. I would rather they be judged on their own merits and not necessarily in relation to anything else. Neither the picture that they are remaking nor remakes in general.

Let’s hope at least that Friday remake doesn’t suck worse than decapitation by machete. Thanks for your time Harry, and thanks for the nightmares.

Well fellow Nerds, there you have it. Harry Manfredini, a great musician and friend. Keep an ear out for his work, past and present. Check out www.harrymanfredini.com for more info.