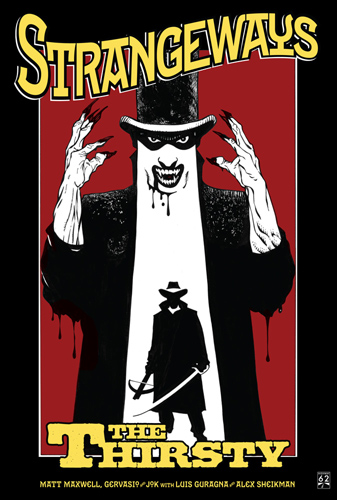 It seems whenever I start a review, I tend to go immediately off into tangent-territory, usually via a self-conscious aside, where I feel the need to give some of my own personal history as an attempt to give my review context. My wife likes to think I do this because I’m being difficult, but being difficult has never been a problem I wanted to correct. I’m fine with being difficult.

No, I offer the asides because, while it does give the reviews context, it also gives the author of the work I’m reviewing their chance to level a justifiable complaint against me. After all, they send the work to me, hopeful I might love it, and when I read it and say I don’t, they’re upset, and maybe rightly so. And by giving them these asides like I do, it gives them something to latch onto in which they might say I’m wrong or just didn’t understand what I was reading or that, because I’m a sputtering writer myself, I’ve some axe to grind with those who’ve gained some little bit more traction than I.

In other words, I throw out the aside because I’m sensitive to writers and want to give those who feel aggrieved something they can use to dismiss my review and to feel better about themselves. Unfortunately, I feel the need to do this in every review because the truth is I rarely ‘love’ anything I read, while I ‘hate’ plenty, meaning that in almost every review I will be saying something that the author doesn’t like. At heart, what I’m doing in giving the authors a chance to dismiss me is to also give myself license to dismiss them. Frankly, giving them the chance to hate me, helps me be objective about them.

So, as this review starts with an aside – two, if you count the three paragraphs above as aside #1 and the following five paragraphs as aside #2 – the author of Strangeways: The Thirsty, should know that unkind words may follow.

I’ve never really been a fan of graphic novels. When I was younger, I did read comics, or at least one series of comics. Mainly, I was into Iron Man. But saying I was into Iron Man is a bit disingenuous because I wasn’t really into him. I was more into him because others were into him. My neighbors as a kid were a year and three years older than me, and because I thought they were endlessly cool – even when they completely were not – I had to be into Iron Man because they were into Iron Man. Not surprisingly, when I moved away, my love of Iron Man got lost in all the packing.

Later, when I got a little older, I started reading E.C. Comics, which had suddenly started appearing in the 7-Eleven near my house. Given I was very much enamored with horror films at the time, Tales from the Darkside and other E.C. titles was perfect for me. But even so, I never became a hardcore fan. I didn’t stake out the stores waiting for the new issues to appear, didn’t talk about them with other people who were into comics and wasn’t so into them I gave a damn about the series on HBO. My interest in comics, then, was that if I had them, I read them, but if I didn’t, I just went about my business.

Since I only had a marginal interest in comic books, it stands to reason that I’m not really one who’s a graphic novel aficionado. In fact, I think I can safely say I’ve read exactly 4 ½ graphic novels, those being: Ghost World, Persepolis, Watchmen, and Maus I & II. The half belongs to Jimmy Corrigan, The Smartest Kid on Earth, which I’m still working through, but not very aggressively and who can blame me? It’s pretty depressing.

In one sense, my limited background to graphic novels might make me seem like a complete mismatch for reviewing a graphic novel. After all, I have absolutely no sense of the history of the genre and so could not possibly hope to understand exactly where any given work fits into the larger canon. For all I know, I might be holding a history-maker in my hands and never know it. Just as likely, I’m holding a steaming pile of doo that I didn’t have the good sense to drop as soon as I picked it up.
In another sense, I might be the perfect person to review a graphic novel, because with my limited background, I have no preconceptions about what a graphic novel should or shouldn’t be, and I’m not so jaded by the usual tropes that I don’t see what I’m reading.

So, tying aside #1 to aside #2, if the authors of Strangeways: The Thirsty are in any way unhappy with what I’ve to say about their work, at least they can take solace in the fact that I’m not the Roger Ebert of graphic-novel reviewers, I’m just the idiot reviewer they landed by sheer luck of the draw, so they should take my opinion for what it’s worth.

Nevertheless, I actually quite liked Strangeways: The Thirsty.

The former novella, which shares the title ‘The Thirsty’ with the collection can be briefly summed up as cowboys and vampires, a classification the author eagerly pushes – hence, he won’t be offended I’ve used it. It tells the story of a town in the old west, overrun by vampires, and the clash they have with a roaming drifter, who with the help of a semi-mysterious Spaniard, defeats the vampires.

The later story is titled ‘Red Hands’ and basically tells the back-story of the villain in the main story. But while the main story is a cowboys and vampire saga, the back story has a more European flavor to it, and the villain doesn’t actually meet any cowboys in it until the last pages.

As I said, I quite liked Strangeways: The Thirsty, but really, that isn’t a fair review. After all, with two stories within the same book, it’s not exactly fair to assess them as one, thereby allowing the favorable opinion of one to prop up the semi-unfavorable opinion of the other. A better plan would be to view the stories separately, and give separate assessments.

Of the two stories, the one I liked least was the title story. To my eye, it was a fairly standard cowboy flick that instead of trotting out the ranchers v. settlers story you might find in movies like Shane, or warring families struggling to control a single town, as in A Fistful of Dollars, or Mexicans v. Americans in Django, it pitted the living v. the undead in a western setting. While this did offer up a few promising ideas, and hinted at something great that might occur, the promising ideas never really went anywhere, and no great thins actually occurred. The ultimate truth is, outside of the novelty of swapping the living for the undead, the underlying story was ultimately a standard western. After all, once the cowboys realize their pistols are useless against vampires, they quickly switch to using stake-propelling cross-bows, which got us right back to a shoot-‘em-up style of western, albeit with a minor twist. And at the end, that’s what the title story truly was, a shoot-‘em-up western with a different kind of gun.
Reviewing the story alone, though, won’t do, because after all, this is a graphic novel. Not only do you have the novel, you have the graphic as well.

I’d like to say that somehow the artwork of the title-story lifts it above the mundane, but it does not. Drawn by the team of mono-named artists, Gervasio and Jok, the book had many good images to present. In particular, I was struck by the panels of the vampire horde advancing on the town under the protection of canopies held over their heads, to avoid the sun. Unfortunately, this was a limited amount of panels and generally the artwork in the book had a crude, unfinished look to it. Perhaps this was an intentional choice, given the story takes place in the old west, which was itself crude and unfinished. But if it was, it was misguided. Simply, the art had a tendency of distracting from the story, especially in those instances when the drawings looked like nothing more than indecipherable squiggles. In my mind, the artwork should be there to enhance the story, even improve on it, but in this instance, I can safely say it did not.

I’m happy to report that the second story, ‘Red Hands’, was by far the better of the two. Telling the origin of the villain from the other story, it follows his evolution from a young man trying to do his best to help his family, to bloodthirsty killer, it was everything the first story was not. It had character development, it had really nice and stylized art – this time by Luis Garanga – and even if it did find itself saddled with some of the usual tropes of the vampire story, such as travelling with a coffin, they didn’t bog it down at all. Better, since this was not a ‘cowboy and vampires’ story, it wasn’t saddled with any gimmicks either.

Better, it left me with the interesting notion that vampirism is essentially a metaphor for substance abuse – in this case, alcoholism – which calls me to reassess much of the meaning of the vampire stories I’ve ever seen or read. It’s an interesting proposition to imagine Dracula as little more than a barely-functioning alcoholic, such as the kind found in the movie The Lost Weekend. This idea might not be one the author thought up on his own, and probably wasn’t, but it definitely struck me a bit and even several days on from reading the book, I’m still a bit amazed I hadn’t seen the connection before.

The unfortunate part is that while ‘Red Hands’ is the best part of the book, it covers only ¼ of the 200 pages within the book, meaning that you have to get through 150 pages of middling material to reach the superb material – unless you choose to skip the beginning story altogether. However, I wouldn’t do that. Looking back on it, I think the better way might be simply to read the two stories in reverse order and that, if done in this way, the larger story might come across better. I can only say ‘might come across better’ because, having read the book, and knowing what to expect, reading them in reverse order will not change anything for me and ultimately, I envy those who can take this approach to the material, because while I give the book overall middling marks, alternate versions of me reading it in reverse order might give it a far more elevated review.

Ultimately, though, the question should be: was reading it a waste of time? On this score, I would say no, it wasn’t a waste of time. But it also wasn’t something I would call a must-read.