MIKE JOY: How did StrangeWerks Films get started?

BRIAN SCHIAVO: Well, Strangewerks Films got started because I was basically tired of playing the spec script game and taking meetings with adolescent development geeks–that whole process gets you nowhere. I did however get ripped off by The Simpsons on a spec script I sent to them, this after they told me a: “we loved the script” and b: “We have an opening on the writing staff and we’re considering you.” They didn’t mention “C,” which is “just keep sending us ideas because we have this big animal called a TV show that we need to keep feeding ideas to and it gets very hungry sometimes. Oh, by the way, please sign this release form.” They never tell you “C.” Anyway, I decided to just go out and do it myself and since I was doing it myself, I would be making the kinds of films I wanted to see–weird horror and sci fi flicks with crazy stuff going on, monsters, and, oh yeah, sometimes strippers…I mean “actresses.” Only kidding….mostly.

MIKE JOY: What is Shriven about?

BRIAN SCHIAVO: The Shriven is about a guy named Ben, who has always been troubled by violent nightmares about himself killing other people. Now they’re getting worse and he doesn’t know why, until he meets Nina, a beautiful woman with a secret—in the dark of night she can transform into a demonic killing machine known as a Shriven. Ben, she reveals, is also a Shriven and he is destined to become her mate. However, Ben is horrified to learn that Shriven must feed on humans to survive.

MIKE JOY: Do you have any interesting behind the scenes stories from during the filming process?

BRIAN SCHIAVO: We were shooting at an abandoned furniture factory in a bad part of Queens. The place was the size of a city block and it looked like the set of Saw on the inside, just disgusting and unsecured as well. Small animals would go into this place to die. You never knew if you were gonna turn a corner and run into a crackhead. One night we were shooting and the sound of gunfire came up all around us. So everyone ran deeper into the interior of the factory to hide. Then I realize–hey, the doors are open. Any gangbangers can just stride right in and pick us off, so I volunteered to go out and secure the doors, which were basically held in place with a bungee cord. Now, I’m in the film, right? I play a monster. (My goal in life is to be the next Ron Perlman, or Lon Chaney, what can I say?) So I have serious prosthetics on my face, white out contacts, fangs, the whole works. I figured, these guys, who are probably strung out on drugs are gonna take one look at me, think I’m a real monster and blast a million holes in me. Fortunately they drove off, by the time I got there.

A few weeks later, I was driving around on Long Island after a shoot, the back seat had a bunch of airsoft pistols in it that we were using–just sitting there plain as day. I was running on fumes, figured I’d pack them away sooner or later. Wouldn’t you know it, I got pulled over by two plainclothes cops ’cause I had a busted tail light? They see the guns, pull me outta the car and throw cuffs on me. They begin to pull out all these very realistic looking handguns and a samuri sword from inside the car–I looked like a rogue weapons dealer from Texas. I figured, I’m going to jail for sure. Fortunately I was able to talk my way out of it.

MIKE JOY: Who does your FX?

BRIAN SCHIAVO: We do some of our own work, though we have worked with various well-known artists in the New York metro area. One thing we also try to do is provide internships for up and coming makeup artists, give them an outlet to gain experience and beef up their portfolios. There are very few of us in the indie genre film scene, on this coast, that actually make features and get them to market, so I think providing a venue for budding young Rick Bakers to gain experience and get their work actually seen is a wonderful thing.

MIKE JOY: What other film projects has your company done?

BRIAN SCHIAVO: The Shriven was our first feature, though we’ve done a lot of prop and effects work for the local indie film scene. I just did a killer robot tentacle for somebody else’s film about a robot invasion of NYC.

MIKE JOY: Where can fans see Shriven or any of your others projects?

BRIAN SCHIAVO: People can check out a trailer for The Shriven at Strangewerksfilms.com. We’ll have a page on the site soon for our next feature “War Of The Dead.”

MIKE JOY: Horrornews friend Michelle Trasatti was recently cast in one of your films. What can you tell me about THAT project?

BRIAN SCHIAVO: War Of The Dead takes place after the zombie apocalypse. It’s about Kendra, a young woman who is a vampire hunter. She’s forced to team up with a black ops vampire crew in order to eliminate the zombie threat. I’d tell you more, but I’m afraid of The Simpsons ripping me off again. ;) Michelle is playing a seductive vampiress in the film. She’s a wonderful person. I can’t wait to work with her.

MIKE JOY: What qualities do you look for when casting a film?

BRIAN SCHIAVO: In all seriousness, I look for people that not only embody the look of the character they are to portray, but who also are able to emote the conflicts within their characters. They have to be able to make me believe the lines I’ve written for them–which ain’t easy since I always write dialog in iambic pentameter.

MIKE JOY: Who are your inspirations in the horror industry?

BRIAN SCHIAVO: I love Guillermo del Toro’s attention to detail. He also understands that the best horror comes evoking real life horror, as he did in Pan’s Labryinth. I am also a big admirer of Clive Barker and the outrageousness of Hellraiser and Nightbreed. I think you have to love monsters in order to portray them with the respect they deserve and Clive loves monsters. I also love Japanese horror. They took it seriously and helped elevate the genre when so many American film producers just wanted to have a serial killer go on a melee on a holiday–Valentine’s Day, Christmas, Boxing Day, Talk Like A Pirate Day–whatever and make a lame movie out of it.

MIKE JOY: What does the future have in store for Strange Werks Films?

BRIAN SCHIAVO: “The Shriven” is being sold now by our sales rep, HollyWood Wizard. “War Of The Dead” will be done by the end of the year. Next year we’re producing a slate of three films that will feature zombies, people who love zombies, interdimensional tentacled horrors, and corporations fiddling with the Human Genome for fun and profit…and probably strippers. 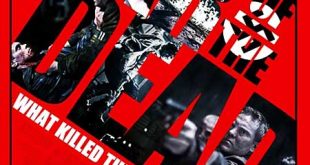