Hey my creepy freaks and sexy minx!
How is it, how was it, and how did it taste?!
A lot going on this week and for one I have to send a big shout out to my boys in orange with a great big
WAAAAAAR EEEEEEAGLEEEEEE!
The big game is coming up and unless ya live in the south, you prob have no clue what that is! haha With Thanksgiving coming up I proprse we all do a few things in preperation.
First off, name your turkey!

That was you can say you ate George for dinner and it doesn’t sound as typical or cliche. Or, if your a guy, name it Pam Anderson. Think of the looks on your friends faces when they hear you ‘ate’ one of the hottest chicks on the planet. Next off, start calling your wife/girlfriend/lover ‘Turkey’.

It will be the best time you will ever recall ‘stuffing a turkey’!

And to end the preperations of this murderous holiday that celebrates the start of the downfall of American Indians, take a good look at that turkey neck. Doesn’t it look like a dead mans dong to anyone else?!

Take it to work and slap people with it.

Nothing says Happy Holidays like getting bitch slapped by a mock severed ‘manhood’! Ok, now that I’ve got some of the perversion out of my system, Welcome to this weeks edition of Bloody Deal!
Check out what’s going on:

News Quickies:
‘Because who doesn’t like a quickly every now and then?!’

The Wayans Bros to remake ‘The Munsters’-
Brain overload! Too many jokes for this one!
Although they do state that they ‘will not be making the Munsters black’ they have announced that they will infact be living next to the Jeffersons and Webster shall have a regular spot as the wacky kid next door. (Not really but funny nonetheless)

Tremors series still can’t bring home the Bacon-
Tremors is making a part 5 and Kevin Bacon still refuses to make a comeback appearance.
Should tell ya something when the Bacon Man would rather not work than to be in a stinkin dead horse of a movie.

Silent Night, Zombie Night to released for the holidays-
So they made a documentary about shoppers as Walmart during the Christmas season?!
I can see that.

Vampire kit auctions off for $14,850-
What kind of crack are people smoking?
Well I just want everyone to know I have a wooden stick that can kill any vampire, any time. I can give it to the right person for $9.95 + shipping and handling!

I watched the short film THE UNION by Tom Laughlin on Sunday.
The premise of the film is a couple goes into a cathedral to get married as a sniper watches on.When the vows finish it gets exposed that the couple are vampires from different covens but neither of them know it.
Let me start by saying that the film was actually very well done as far as technical aspects go. It is aesthetically beautiful and flows well from frame to frame.

My problem with it is the story line lacked way too much to flow in an understandable manner. It had some very severe gaps which left the story very improbable and gave it a very rushed and unfinished feel. It goes against many of the ‘vampire laws’ that are important to the subject such as wearing crucifixes or being killed by a bullet that didn’t seem to have hit his heart. Now each vampire-story teller can bend rules a bit but I have never seen as much deviance from a single story.

It’s up to you to watch it and form your own opinion and if you disagree, lets talk! But in my opinion, it needs to be pulled and re-‘vamped’ a bit before releasing again. (Ok so it was a bad joke but it was the proper word! haha)

This is a new segment I am introducing and what better way than to start it out with Nick Percival! This King of Comic Book Illustration has a talent that surpasses many of his time. Not to mention his work on the soon to be released Hack/Slash Comic Book issue 26 cover features a character he modeled after this devilish little minx and when you see how much it resembles me you will see what makes him so brilliant
Check these out!: 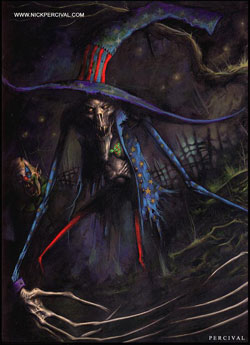 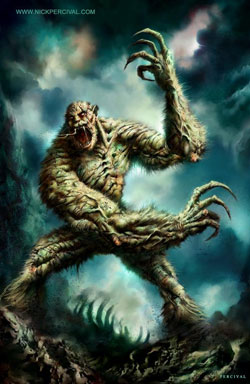 Wow! People really dig Tracy Coogan!
I am giving away free signed prints of Tracy at her hottest.
If you would like one all you have to do is email me at whatsthebloodydeal@yahoo.com and request one!
I have plenty more, so get yours today!

Thanks for stopping by and checkin us out!
Comments? Questions? Complaints? Death Threats?
I want to hear them all! Drop me a line and tell me what you think.
And if there is someone or something you think I should know about, email me and I will get on it asap!

Hope you guys have a killer week and as always…