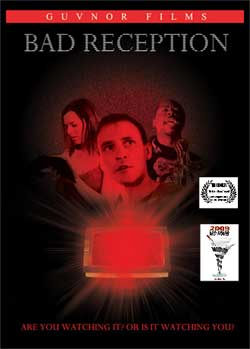 The spirit of a long dead priest returns to terrorize a young writer and his friends.

Is “Bad Reception” a bad movie? For the most part yes. That said, writer and director Mark A. Todd does show promise throughout. There are some cool parts in this movie, just not enough to make up for the rest.

Supposedly this is “based on actual events.” Now I’m not necessarily saying that a possessed large screen television that kills people couldn’t happen, but let’s just say it’s a stretch. From there we jump right into what is a kind of different but effective opening. It’s as if we are at the beginning of an ancient book, complete with fancy lettering and faded pages that are turning brown. The text that follows pretty much sums up all of the back story. 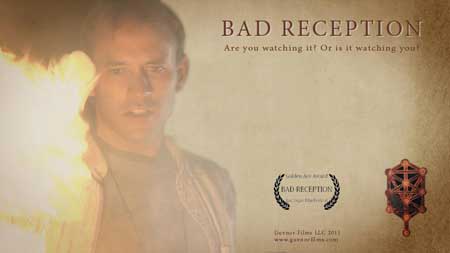 “The stories say they were called the Vigilant. Seven humble priests sent into towns and villages to enforce the word of God, punishing those who violated church laws. At first the punishments for Sinners were minor. But as the Vigilant grew more powerful, so did the severity of the punishments. Soon anyone deemed guilty of committing a ‘cardinal sin’ was immediately put to death. Summoned to Rome, the seven Vigilant were branded heretics, and publicly disrobed. Before taking his own life on the Vatican steps, the last Vigilant vowed he would return to continue his work. As the dagger found its home, onlookers said they saw the fires of Hell in his eyes.”

I’ll be the first to admit that at the end of that voiceover I was primed and ready to go. Nothing like an ancient spirit wreaking havoc on us modern folks. Cut to Palmdale, California in the year 2007. Ben Anderson is driving his truck across the remote desert landscape on his way to Los Angeles and a better life. Too bad he stops to take a leak and spots something shiny out amongst the brush.

You guessed it, it’s a large flat screen television, sitting next to a small, white wooden cross. In a pretty funny moment Ben looks around the desolate area just to make sure no one is looking before he promptly picks up the television and puts it in the back of his truck. Off he continues to his new apartment where he meets his landlord Rachel and her fiancée Paul.

After getting everything set up he invites them and a couple of friends over to drink and watch a movie. Too bad the television doesn’t work. Or does it? Later when he is alone it blinks on and shows a priest giving a hell-fire sermon of sorts. Ben tries to turn it off. No luck. And when this lovely television begins to show events of his friend’s death, Ben realizes that maybe he should have left this thing in the desert.

Bad Reception does have its moments. There are a few pretty good kills, the blood while not plentiful is pretty realistic. The special effects aren’t half bad considering the budget. The acting is uneven but tolerable for low budget horror.

Writer and director Mark A. Todd seems to have fun with some of the horror clichés. He even gives a shout out to screenwriting guru Robert McKee which was way cool. On IMDB they have Mark listed as an uncredited “boar warrior” in Muppet Treasure Island. How awesome is that? With Bad Reception he shows promise but overall the movie falls short.

Maybe because while watching it you get the feeling that you’ve seen this movie before. To be fair, most horror movies have this because, let’s face it, every genre has its conventions. But for some reason it just seemed to resonate more here.

I would have to say only see this if you can catch it for free. For die hard low budget horror fans it might, and I stress might, rate a rental. I know I won’t be taking any abandoned items I find by the roadside home. There’s just way too much risk. Besides, television is meant to kill time, not people.