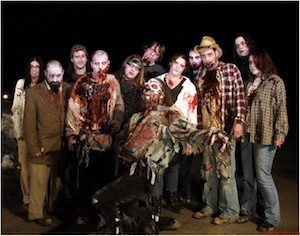 In the small town of Ten Acres, a group of friends take a weekend ski trip. During their trip, they find that the town is being attacked by zombies! The group unites with other guests staying at the Ten Acres Lodge in VT.

How is Blood Lodge different from other horror films?

What sets Blood Lodge apart from other zombie movies would be the cast of character mixed with the made up universe, “Ten Acres”, myself and partners Ed McKeever and Jason Koerner created.

How long did it take to make Blood Lodge?

Well we started pre-production in November and started filming in March. In all the actual movie took 7 long days to shoot. 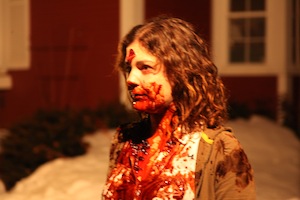 Where was Blood Lodge filmed?

We filmed Blood Lodge at the Ten Acres Lodge in Stow, Vermont. We also did some re shoots in Allentown, Pa and Hammonton, New Jersey

Any interesting behind the scenes stories while making this movie?

Of course there’s drama it wouldn’t have been a movie without it, kidding aside, I worked with the most professional and talented cast ever out of the 4 movie I made.

Tons of zombies and gore with slow zombies

Do you have a favorite scene from Blood Lodge? 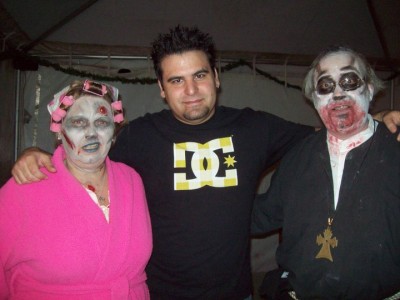 How did you get involved with Graffiti Playhouse Productions?

I created Graffiti Playhouse Productions in 2010 to basically do the thing I love to do most, make movies. I was tired of lending my talents to “kids” who weren’t serious about the making of film and only wanted stardom. With my partners we have made a lot of movie magic with limit budgets and time, we never failed nor gave up. Now with 4 movies under our belt, we look to meet other film makers to expand our network to keep doing what we love to do, make movies. l I met my partners Ed McKeever and Jason Koerner through Craiglist in 2010 and new comer Lauren Magura in 2011.

We will do a movie anywhere the world takes us.
You can look out for Ticket to Hell, Terror at Ten Acres, and Pembrook all looking for a 2012 release