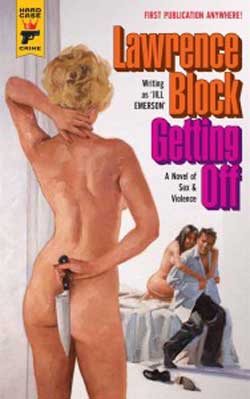 Katherine Tolliver is a beautiful young lady who enjoys sex, especially one-night stands with complete strangers. She also enjoys brutally murdering the person after she has had sex with him as well. You see, something happened to Katherine when she was a child that made her look at sex differently than most people, and as a result she has a mission in life: She has to kill every man she ever had sex with. As she travels from city to city killing her past lovers she also makes sure to have sex with a variety of men that she meets in random places and kill them as well. Will Katherine succeed in her quest or will the police get wise to what she’s doing and stop her before she kills everyone on her list?

I thought that the plot of “Getting Off” sounded pretty damn interesting and I was eager to check it out. Once I got my copy I couldn’t help but dig the cover art (which features a naked woman from behind holding a knife) and after I started reading it I realized that I was going to be in for a real treat. “Getting Off” is an awesome novel that features a ton of sex, a ton of violence, a great story, and one of the best serial killers to appear in a novel since Dexter Morgan. I was pretty much hooked from the opening sentence to the last page, and to be honest I was a bit sad that I finished reading it in such a short period of time and I couldn’t help but want more. It has been quite a while since I could say such a thing about a novel.

“Getting Off” was written by the very talented Lawrence Block (writing as Jill Emerson), who has had quite an impressive career in the world of fiction. I personally have never read any of his other works, but I have a friend who absolutely worships at the altar of Lawrence Block. He has a great writing style that just reels the reader in and before you know it, you are hooked and you can’t stop reading no matter how hard you try. I know that I had a very hard time putting this book down on several different occasions, and I was so into it that there were many times when I picked it up and intended to only read a chapter or two but ended up reading it for hours on end. I think that I am going to have to go check out Block’s other books now, if they are as good as “Getting Off” was then I can see myself becoming one of his biggest fans.

There are countless reasons why I loved this book. First, I just really dug the premise and thought that it was totally and completely brilliant. The idea of someone hunting down men and killing them just because she had sex with them is a very original and interesting idea, and for the most part I found myself cheering Katherine on as she carried out her quest. It was fun reading about her killing these men off, and while some of them deserved it more than others, I had a hard time really finding any sympathy for most of them, especially the ones that she has flings with while she is searching for the men from her past. I think after reading this book that some guys will have second thoughts about hooking up with women that they have just met.

I also loved the character of Katherine. She is a heartless killer who shows no remorse about the murders that she commits, but at the same time I couldn’t help but like her. She had a very screwed-up childhood that caused her to do the things that she does, and I really don’t blame her for becoming a brutal murderess. I can see her becoming a cult figure eventually, and if there is ever a movie version of this novel produced (hopefully by someone like Tarantino), I can see Sherry Moon Zombie playing the part of Katherine as I kept picturing her the entire time I was reading the book.

I had a great time reading “Getting Off.” There is enough sex and murder to make anyone happy and I think that a lot of readers out there will really get into this book. It is well-written, entertaining, and is a great read from cover to cover. If you are tired of reading books that leave you less than satisfied then I suggest you pick up a copy of “Getting Off” as soon as you can. Believe me when I say that you are in for a wonderful time.

Getting Off – Author Lawrence Block

Tags Getting Off Lawrence Block 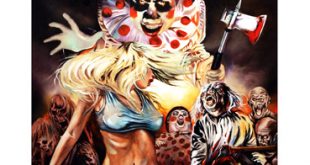