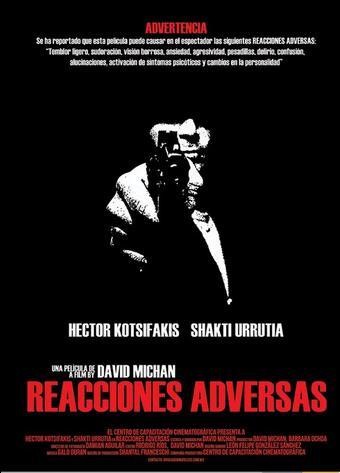 Daniel is a young man suffering from low self-esteem, who is incapable of defending himself from the abuses of employers and of society in general. He is medicated with antidepressants to make his monotonous life more bearable; however, far from helping him, the medication worsens his condition with hallucinations and psychotic thoughts of vengeance that lead him to a state of total confusion between reality and his imagination.

The drug is called Lubiomil & this is what is written on the back of the bottle under Adverse Reactions: “Increased appetite, tremors, dry mouth, blurred vision, increased sweating, anxiety, aggression, memory loss, nightmares, delirium, confusion, hallucinations, psychotic episodes, mood swings & sudden sense of falling. Any of the following symptoms may persist or begin after discontinuing or reducing the dosage: Nausea, vomiting, abdominal pain, diarrhea, insomnia, headaches, agitation and worsening of the underlying depression or relapse of depressive moods”. This is the drug that the main character (Daniel) takes in “Adverse Reactions”, a new film from Mexico that is slightly reminiscent of Polanski’s “The Tenant” and extremely reminiscent of Scorcese’s “Taxi Driver”. As a matter of fact, but for a few plot adjustments it could be a remake of “Taxi Driver“.

The story itself details the life of Daniel Icenberg, a man who’s under a physicians care for an unnamed mental ailment. In the beginning of the film we find him in his doctors office being prescribed the drug. After he gets home & listens to his messages (Which are all from bill collectors. He’s deeply in debt), he reads off all of the side effects of the drug & decides “Either way I’m screwed” before downing a couple of the small Blue tablets. The next morning we find him in a cubicle where he works just as he’s getting a call from his boss to report to him immediately. Daniel immediately gathers some papers & rushes up what seem to be endless flights of stairs in a completely empty building before arriving at the Meeting room which is occupied by his boss & a assortment of cardboard cut out people positioned around the table. This is how Daniel sees them due to the effects of the drug, as an assortment of characters cut out of his imagination. What we’re left to ponder is are they really there & Daniel sees them as we do or is the room actually empty except for Daniel & his boss?

Daniel presents his report to the boss, he opens it and after looking at the first page for a few seconds asks Daniel for his pen. When Daniel gives him his pen his boss thrusts it down his throat & promptly vomits all over Daniel’s work. He then calmly closes the report & hands him back his pen advising him he has one week to turn in a new report. But as the camera goes back to Daniel there is no one sitting in the seat his boss was just in although the report is still on the table. Daniel is just standing there, all alone and trembling. Once again we have to wonder, did his boss just get up & leave or was he ever there at all? Is it all in Daniel’s mind? Daniel leaves the room to a hallway full of these cutout people, just standing there, although he hears them murmuring under their breath. He goes to the bathroom & takes another pill. Next we see him with a shotgun, running through the office shooting at people that we hear screaming but never see. He then runs up to confront is boss & rather than beg for mercy, his boss congratulates him for having a set of balls in his imagination at least. All of a sudden, Daniel is back at his home with a baseball bat destroying everything around him. Then he cuts his hair, gets into the tub & promptly overdoses.

Next, we find him in a hospital. How he got there we’re not told. He’s placed in a room but when he opens his eyes he’s back in his apartment, looking just the way it did when he smashed it up, the overturned bottle of pills still laying on the floor where he left them. Not only is he not sure of what’s been happening over the last 24 hours but we really don’t either. It’s quite possible that all of this is going on in Daniel’s mind thanks to that good old Lubiomil he keeps popping indiscriminately throughout the film. At one point in the film he finds a man who is standing in the shadows in his home, singing “Blue Suede Shoes”. When Daniel asks if he’s Elvis the man replies, “Carl Perkins”. Carl then recounts the story of how, but for an accident on the way to a TV performance, he would’ve been the big star that Elvis became. He then offers Daniel advice on how to solve his problems…he hands him a gun & tells him that “Dogs that bark don’t bite”. This reminded me of “True Romance” and Christian Slater’s character receiving advice from an imaginary Elvis every so often. But this isn’t even the most interesting part of the movie, he ends up in a Karaoke bar listening to a woman with a horrid scar running down her face trying to sing “Ooh Ooh Child”.

She’s not very good & is mocked by three men at a table & eventually runs from the club midsong, crying as she goes outside into the night. Firstly, Daniel follows one of the men to the bathroom where he promptly kills him then he runs outside to find the woman sitting at a bus stop. It begins to rain as he sits next to her & offers her a smoke. She silently points out the blood on his shirt and he tries to wipe it off without offering an explanation of how it got there. Next thing we know, they’re at a coffee shop discussing each others problems. This discussion continues outdoors after the rain has stopped & they end up in his flat making love. She offers herself up to him as his “Motivation”. A reason for him to live and not be trod upon by the masses as he has been (Or has he)? He proclaims that “It’s all too beautiful to be true”, she tells him that he might have “A distorted sense of reality”. She rises to leave despite his pleadings for her to stay. She types her number into his cell & tells him her name is “Paulina”. He promises to call her.

From this point on, Daniel seems to have a reason to live. He tears up his credit cards and burns all of the solicitations he has for other ones. One of them has the words “Wake Up” on the front of the envelope & again we wonder..is he dreaming all of this? The film is full of these little scenes that make us pause & wonder exactly if he’s awake or just under the influence of the drug. he goes to the bank to cash his last check & buys Paulina a CD of “Ooh Ooh Child”. This is practically the only part of the film where Daniel is even remotely happy and even then it’s only fleeting because as he enters a cab to get back home, he is attacked by two men who are in cahoots with the cabbie. All of his money is stolen but more importantly his cell phone with Paulina’s number. He has no other way to contact her & she was sure he wouldn’t when she left him the night before. He finds himself left on the street badly beaten & seemingly without hope. He gets advice from the dog & Perkins this time & he gets a gun as well. The dog tells him how & why he was targeted & he goes after those responsible. Not for the money, all he wants is his cell phone. He wants to contact Paulina, his “Motivation”. He is convinced that without her he is lost. But once again, was she real or was his interaction with her just a part of a dream induced by the drug?

He does find the perpetrators who were responsible & the similarities to “Taxi Driver” go way over the top. Daniel wants his phone, he wants to contact “Paulina” and no one will stop him. She’s what he needs to be happy much like Travis Bickle had to rescue Iris in “Taxi Driver” to get her out of the life she was living & maybe redeem a bit of himself in the process. I cannot say what happens from here on out but I can say that the movie ends with Daniel smiling. Why? You’ll have to find out for yourselves. “Adverse Effects” wears it’s aspirations to “Taxi Driver” on it’s sleeve unabashedly. It even has a sort of “You Talking To Me”? scene in it. This could be perceived as a problem for those who worship at the throne of Mr. Bickle but it wisely wraps it’s similarities to that film around the main issue of the drug & it’s effects on poor Daniel. In “Taxi Driver” we knew that Travis wasn’t imagining the world he was living in, it was grimy, greasy, ugly & real. But we’re never really sure if Daniel’s world is real or just his imagination, the “Adverse Effects” of the drug he takes. Although he seems convinced it is, it’s impossible for us to be sure although the last 15 minutes or so are real. Daniel is played by Hector Kotsifakis (Who bears a striking resemblance to boxer Oscar De La Hoya) and he really sells the madness that he is suffering with on a daily basis. Paulina is played by Shakti Urrutia and although she isn’t on screen for very long she leaves a lasting impression on the audience much as she leaves one on Daniel. Although it is quite obvious that she is a beautiful woman despite the hideous scar on her face. They are the only real characters in the movie. It’s essentially a one man show with a quick supporting turn.

The film is rife with imagery & dialogue that afterwards will have you thinking. The film can be dissected in various ways but I doubt that there will be a general consensus as to what’s real & what isn’t in the end. It’s the kind of movie that will create debate and that’s a great thing. It’s what’s necessary in a film like this for it to succeed. Director/Writer David Michan has crafted a delirious fever dream of a movie that will have people talking for a long time afterwards. The Black Saint is giving “Adverse Effects” a solid 4 Shrouds. I was tempted to give it five but it made me think too hard afterwards & you know The Black Saint doesn’t like to think. It hurts when I think, that’s why I have the acolytes do all the heavy lifting. I just tell em’ what to do, how they do it is of no concern to me. I would go out of my way to see “Adverse Effects” when it’s released. It’s worth the time, just be prepared to decide what’s real & what isn’t…