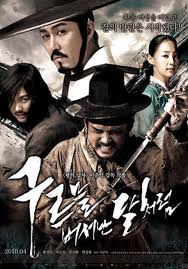 During a turbulent time when political upheaval, rebellion, and invasion are coming to a head two swordsmen are caught up in a violent and bloody struggle to seize control of the country they love. With their army of alliance standing behind them they will meet for the most important battle of their lives. Swords will be drawn while many lives are lost, but only one swordsman will walk away the new king of the land.

As we have seen in numerous other Asian sword films, there is a distinct interest in the time when politics and rebellion strolled hand in hand in countless battles. A time of heroes, suffering and death.In fact, to be more specific, the era is presented during the time when the Japanese invaded Korea. 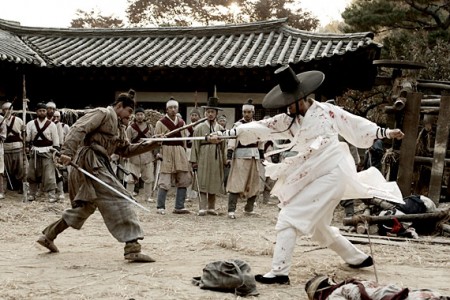 There is much in the Asian culture that deals with honor, sacrifice and protecting ones own ways. From this notion, a wave of films have originated on this basis. Though for viewers who don’t understand all the Asian culture traditions, there still is the attraction to bloody swordplay and martial tactics. This is one such story which incorporates all of these.

Lee Mong-Hak (Seung-won Cha) is the resident bad ass who plans on overthrowing the King and the West. As rumors of an alliance grow, the King has ordered that all traitors be executed and humiliated (in some form or another). Though even the King fears a war which could threaten the Western stronghold. As word of a Japanese invasion increases, Lee Mong-Hak feels that the current ways of nobility have been largely ineffective in the event of an attack. His own self arrogance combined with a dream of a stronger kingdom fuel his efforts as he raises an army.

Lee Mong-Hak, a expert in swordplay, and presented as almost unstoppable, has become corrupted creating many enemies along the way. As he says it, those who are not with him must be executed. Even when warned, he pushes on sacrificing many of his men in the process. His sensui, a blind man named Hwang Junghak (Hwang Jungmin), does not care for this violence and warring. His obligation seems to be turned towards bringing down one of his former students.

Han Kyunja (Baek Sunghyun), a bastard child is forced to watch as his father is butchered for political betrayal. This motivates a single urge to avenge his fathers death by killing the rather uncompassionate Lee Mong-Hak. In his journey, he is aided and taught by Hwang Junghak who will help him gain the training he’ll need to take on such a skilled opponent.

As a product, there is some rather interesting battle scenes but as a whole the film feels somewhat unfocused, often mucking up some of the underlying subplots. I know that the title alone will draw in action film seekers, but it should be noted that much of the film is laced in drama.

The movie is based off of a popular comic series by the same name. It’s elaborate sets and costuming make this a very traditional feeling Asian war story. Perhaps with more action and less character build it would have hit its mark.

Blades of Blood is now available on DVD from Lionsgate