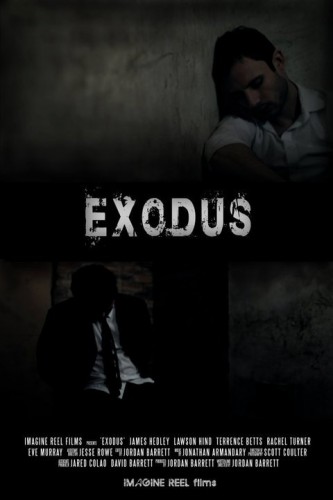 Dust fills the air of the dark abandoned room as Jacob (James Hedley) begins to regain consciousness. Opening his eyes he stares back at the bound stranger (Lawson Hind) opposite him. After the sharp noise of radio static breaks the silence Jacob is faced with a decision, one that will shape his very future, pushing him to his very limits in order to save those that he loves.

Jacob wakes to the reality of a strange environment, one he doesn’t quit understand. As he moves about the sealed room, he encounters a bound stranger across from him and a cell phone which gives him a choice.

A life for a life, the cell phone instructions are quite clear. Jacob must kill to save his wife an daughter.

Jacob wakes the stranger to asks him a few questions, though only after grabbing the gun from his pocket.

Jacob is given a choice that pushes the boundaries of his own views of right and wrong.

Jordan Barrett has created a short piece that forces viewers to look within their own sense of moral. While the film ends on a note that seems to cut itself short, I think its intention is simply to analyze a more emotional connection to the decision and the wight of his actions. Simply Exodus take the road that many would be forced to take regardless of conscience of action.

Barnett has gone for a more familiar approach, one that mirrors many other choice driven films. The strength here an ability to minimalize the story and characters onto a road of inevitability . Most viewers will ask the simple question of why wake the stranger if your mind was already made up. It asks the question, does the stranger’s answer change the point of view or merely provide a short resolution to Jacob’s curiosity.