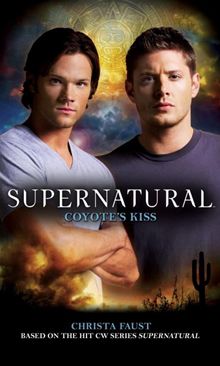 Supernatural: Coyote’s Kiss by Christa Faust is a novel based on the television show “Supernatural” found on the CW network. As someone whom has never watched an episode of the show, not because I wasn’t interested but because of the time slot, I was a little worried about whether I would be able to get into and understand what was going on in the book. I actually had no problem with being able to jump right into the storyline and get to know the characters. There were a few things that I had to get caught up on but the author skillfully incorporated basic pieces of information in the plot that assisted novice viewers, like me, with the ongoing storyline. This particular novel took place during season six of the series.

In this novel we find the Winchester brothers, Sam and Dean, on the hunt for something sinister that is killing border patrol officers and illegal Mexican aliens being smuggled across the border. This sinister force has great strength, with the ability to rip into bodies with much ferocity, and then disappear into thin air. The brothers are clueless as to what might have caused such damage until fate forces them to partner up with a stunning, and powerful, Aztec-descended huntress named Xochi. Xochi informs the boys that what they have on their hands is a Borderwalker, which is a woman that has become trapped between two worlds by an unfortunate event.

As the plot progresses, more information about the Borderwalker arises and an even darker evil seems to be pulling the strings. Many trips are made, by the boys and Xochi, back and forth between Mexico and the U.S. to find out how to destroy this dark and unnatural evil. Along with being tangled in a lusty back and forth with Xochi, Dean must put to rest his own inner demons while keeping Sam grounded in humanity since he is lacking a soul. The new trio finds their hunt becoming more and more complicated and dangerous, leaving Sam and Dean to wonder if this job is just a little more than they can handle. Specifically, Dean finds the job both physically and emotionally taxing.

This story is full of great action and just enough gore, as well as an intense, lusty secondary plotline. Although those who would undoubtedly be the first to pick up this novel, “Supernatural” fans, already know the Winchester brothers, the author does an excellent job introducing them in a way that doesn’t seem too redundant for the fans. The story keeps you wanting to read more as the action picks up and another character gets thrown into the fray.
Coyote’s Kiss is an adrenaline pumping, teeth clenching, edge of your seat ride. You won’t find any long, lagging parts, as any down time in the story is necessary to the plot and a good reprieve from the intense action. This novel is a good read both by itself and accompanied by the television show as well as the several other books based on the series, none of which I have actually read yet. This story makes me want to catch up on all of the previous seasons of “Supernatural” because it really does seem like I’m missing out. If the episodes are even close to what the book offers then it must be pretty damn good. Although I’m not completely sure if this will satisfy the avid viewer of the show since I have no idea whether Sam and Dean are written like their characters should be, but the book is at least worth checking out.