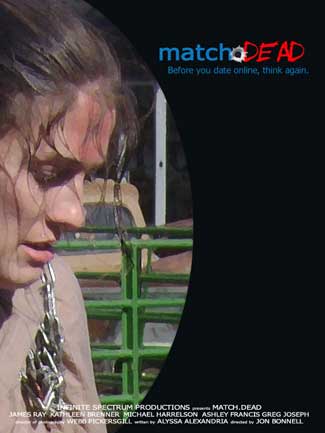 A voyeuristic view into a few days in the life of a serial killer named Ridley. Ridley likes to find most of his victims using internet websites, when that doesn’t work there is always random people driving by. Wait until he gets a load of the one his website has hooked up with this time though, maybe those websites out there really do find your perfect match.

“I can’t keep messing up a pretty face like that.”

I can’t go anywhere these days without seeing an add for some kind of dating website. Turn on your television late at night and every commercial break you are bombarded with commercials promising instant compatibility, in between these commercials of course is your “dateline” ads. Log onto popular web pages like MySpace and you also see the ads that promise that you will have a date that night. America is full of lonely people; apparently these people are also lazy and rely on others to find their perfect match.

Sure the websites seem like a smart idea, I mean have you ever actually tried to meet someone at a bar? There however was always a sinister feeling in my gut when I would see these commercials. I know what you are thinking, and maybe I have seen too many horror films. Just what kinds of people however do use these sites?

In Jon Bonnell’s film The Abducted you get a glimpse into the world of two people who have obviously decided answer that question. The Abducted is also known by the name Match.Dead, I know clever isn’t it. The Abducted suffers from a low budget. This quickly becomes apparent halfway through the film when you realize that the movie you are watching is mostly taking place at a trailer in a desert. The cast for the film is also minimal. The director clearly just wants to focus on the relationship of two people. The two people in question are a man named Ridley and a woman named Valora.

Ridley is seen at the beginning of the film out in the desert, he is shooting animals on his property when he notices a jeep with two men in it. After shooting both of the men the jeep runs off of the road and we are treated to a voice over from Ridley explaining how the blood helps the flowers to bloom, and he happens to love flowers (isn’t that sweet he is a sensitive psychopath). Another little quirk about Ridley is he doesn’t like to touch dead things, in fact he down right spazzes out if a dead arm or leg brushes by him (yet in one scene he wakes up next to a woman’s corpse with a gunshot wound in her head laughing).

Valora is a different type though; in the beginning of the film we find that she is being held captive by Ridley. Valora’s outfit in these first few scenes is kind of amusing, her shirt reads “some call it stalking I call it love”, and the word stalking is huge and glittery. When I first saw this shirt on this woman I thought to myself, well she gets what she deserves. As the film progresses we learn that obviously Ridley also keeps a collection of women’s clothing around his house, and conveniently changes Valora whenever she is asleep.

When Valora is asleep, or knocked out, we are treated to a flashback sequence. These flashback sequences usually involve a young Valora with her grandfather. Valora has obviously lost her parents and is now in the old mans custody, and for some reason Grandpa wants to teach the little girl how to kill using a gun, but she only has to do it once. Gramps theory is that if his granddaughter can kill one time she will keep that piece of knowledge in her head and be able to kill again should she ever have to.

Most of The Abducted centers on the characters of Ridley and Valora. However there are two other characters, Grandpa makes appearances in modern times as well as flashbacks. Grandpa also has a friend who is simply named Guy.

When Ridley comes into town for a quick stop he of course runs into Grandpa and Guy. They of course think he’s kind of sketchy. He looks like he’s seen too much Grandpa says, every man he has ever known who looked like that went off the deep end. Little does Grandpa know though his granddaughter is being held captive by the delinquent only a few miles away. Guy decides he wants to go check it out though, something about the guy is fishy and he intends to find out what it is.
When Guy gets to the trailer he of course stumbles around until he finds the work shed where Valora is being held captive. The two of them communicate slightly at the window when suddenly Ridley uses his sniper rifle to easily pick off Guy, smearing his blood (but no brain or skull fragments what a rip off!!) on the window. Luckily Guy told Gramps where he was going, it’s only a matter of time before Grandpa shows up to find out what’s going on at that house, and find out what’s happened to his granddaughter.

As I stated above The Abducted suffers from a small budget. Most of the film we are treated to watching Ridley talk, and boy does he love to talk, and Valora looking not frightened and almost bored. When I read the synopsis of the film I got excited, here was something that could have been wonderful in my sick imagination, but we are kind of let down.

The use of the website idea is only discussed briefly; Ridley points the website out to Valora and actually shows her his next victim. Valora says that she knows the girl and Ridley talks about how she will run, and when she does he will send her to the gates of heaven. After Guy is killed we of course are treated to a scene of this said internet girl pulling up, getting out of her car and waving at Ridley (who has a sniper rifle in his hand and Valora standing beside him bound!?! Obviously she deserves to die). Ridley smiles and waves back as Valora screams for her to run.

Internet girl in a great show of stupidity runs away from her car (while she’s standing right by its door!) further into this psychopaths property. Ridley simply smiles and walks after her, in a matter of seconds we are treated to the sound of a gunshot and of course the internet girl is killed. That few minutes in the film is the most we see involving the idea of a serial killer using the internet to meet his victims. As I have stated above, most of the movie is simply Ridley talking and Valora having flashbacks and looking bored.

Lets talk about the gore though, or what gore there is. We do get a couple scenes of finger violence, done to both main characters. One has their finger shot off with a sniper rifle, the other of course gets their finger chopped off with a rusty tool (in one of the few scenes I did enjoy as it brought back memories of the exploitation films of the 1970’s, in fact I think that may have been what the director was going for with this film). There is of course multiple gunshot wounds inflicted throughout the film, most aren’t especially noteworthy. There is an interesting sequence in which Ridley is having a date with Valora, during this sequence we are treated to images of Valora stabbing out Ridley’s eye with a fork, and stabbing his hand with a knife (sadly these images are all just figments of Valora’s imagination).

I really did like the idea behind The Abducted; it really could have been a great modern exploitation film. However James Ray’s performance of Ridley really did have me wishing that Valora would just hurry up and shoot him, yes he really does talk that much. If you watch the film expecting a serious film, which I think the director may have been trying to do, you will be let down. The Abducted however does have that quality of several scenes being unintentionally funny, so if that is your cup of tea then jump right on in. 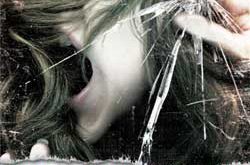