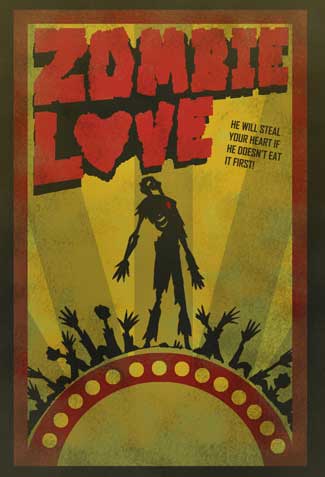 Zombie Love tells the story of Dante, a 200 year old zombie, who falls in love with Claudia, a mortal girl, after he saves her from an attack by two grave robbers. Thinking that a zombie could never win her love, he changes his flesh eating ways to win the girl of his dreams. The closer Dante gets to his desired love, the harder he finds it to maintain the facade, especially when his zombie friends try to intervene. This award winning musical extravaganza, filled with singing, dancing, blood, and gore, will have you laughing all the way to your grave!

Special Features: Deleted Scenes, Outtakes, Behind the Scenes, and much more.

I walked into his movie with really no expectations but in the first couple minutes of Zombie Love, it won me over. I spent the better part of 37 minutes rolling on the floor laughing like Hyenas. Yes, It’s a low budget short but don’t let the term foul you because the production involved in making this movie, all the singing and all the dancing is… in a word ” professional “. It’s a real Cinderella story, but instead of the Prince with the glass slipper looking for the perfect fit , here we have Claudia with a chopped off zombie finger looking for it’s rightful owner. Now, I couldn’t put my finger on it, no pun intended, but the way the songs are performed was delightfully familiar. I’m not traditionally a fan of musicals you see, but after thinking about it for a moment or two, it hit me that the performances here are like the songs you would hear if you were watching a Disney animated film. That sir, is a compliment. The difference, of course, is that you don’t hear songs about blood and gore from Disney.

I hold your bones, I eat your flesh I have killed you with success And yet I must confess
That even though your life is through
It is I who envy you

For centuries I’ve walked this earth
But it just isn’t worth
Having nothing to live for
Having no one to adore
Immortality is just a bore
Who is this creature I’ve become?
I live yet I feel numb
I’m a zombie…

That’s a taste of some the lyrics. Actually, those lyrics will the be first thing that you hear Dante sing in the film. It’s a real treat watching the choreographed fight scene / dance scene with zombies versus grave robbers as it happens, and then if you check out the extras they have some bloopers of that scene too. That fight scene is the set up for Dante to first meet and save Claudia and lose his finger. I don’t want to give too many details away here, but on the other side of that I believe the more you know about this movie, the more you are going to want to see it. If there is a low budget aspect, it would probably be the zombie make-up.

Don’t go into it thinking you’re going to see zombies from Dawn of the Dead or 28 Days Later because you’re not. You’re going to see your typical low budget zombie and that’s not all that bad. Most independent zombie movies are forgettable and to be honest, I probably only watch them once and never again. I came out of this movie watching experience thinking to myself, oh man – I need to show my friends this flick next time they come over. I think that’s the best compliment I can give this movie or any movie for that matter. I need to mention another scene that is awesome, when Dante’s friends bring over “food” for Dante and them all too eat , the friends break into a song called, “Now eat the flesh” that can best be described as a combination of Saturday Night Fever meets Michael Jackson’s Thriller. That’s all I’m going to say about that.

This is the title song and beautifully closes the film. The entire ending production is outside in a field reminiscent of Steve Carol singing Age of Aquarius in The 40 Year Old Virgin. Totally funny stuff. They really get a little crazy and creative after this, because then they perform the whole Bollywood version of Zombie Love and then during the credits the pace of the music completely changes from the Disney’esq music to an old school rap complete with booty shakers.

I really wish these guys well, and I really hope to see this original short film become a full length production somewhere in the not to distant future..because I know that’s what they are shooting for.