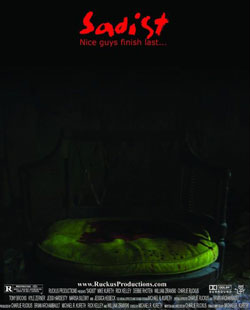 A short film provided by the team at Ruckus Productions is the best of a recent compilation I was sent. The little piece is actually a comedy horror bit that makes a play on those video dating interview tapes. Directed by Charlie Ruckus, this piece has that same flair of humor that I loved in films like “Behind the Mask: The Rise of Leslie Vernon”.The short piece is featured on the “Ruckus production shorts” compilation but you can view the piece HERE . “Sadist” really is in my opinion the only short film on the DVD, as the rest seemed like maybe tests or fillers….I’m stilling trying to figure that one out.

Mike our focal character is filming a video interview profile. In fact. he is stated as “looking for a serious relationship”. As he speaks to the screen about his likes, dislikes, and personality traits they are interwoven with brutal horror shots. The dialog is a play on words that in reality is completely something else than the context we expect from his monologue. Gags such as “smile from ear to ear” cuts to a woman having her throat cut and so on. What works for this short is the extreme contrast of what he’s talking about. Personable up front, but in reality a sadistic killer…cool stuff! The FX are pulled off cheaply but effective as well. I don’t know, I really liked this piece and just thought it worked for its medium.

The piece runs only 5 minutes but is the kind of horror content you expect to go viral. I’m sure if some thought was put into it, it could be taken to the next level of perhaps a feature based on this idea.