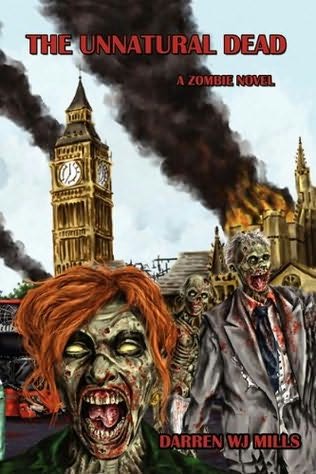 It’s begun! The unthinkable has happened! The dead are walking! Around the world something unthinkable is happening, something unnatural. In the British town of Hemel Hempstead many are still unaware of the horror they are about to have thrust upon them. Tom and Sarah are content with their quiet lives in the suburbs of London, but soon their ordinary life will end and they will be tested beyond imagination .In a world no longer recognizable, their love for each other will be all that matters. Danny lives his life haunted by the past. He spends every day alone, caring only for himself. He believes nothing could be worse than what he’s already suffered, but he will soon change his mind and learn that being alone is no longer an option.

Carla’s world revolves around her mum, her friends and what the latest fashion trend will be in her next magazine, but soon all this will end. Within a matter of hours their desire to stay alive will replace all plans and emotions they’ve ever had and that desire will be tested beyond all imagination. Determination, compassion and friendship will be all that stands between life and death for those left to fight for survival in a world of the Unnatural Dead. The exact place it began is unknown, by the time the horrifying truth is realized, it’s too late to stop, spreading everywhere and affecting everyone. London is in ruins, the dead walk the streets feeding on all they find. No one is safe! The apocalypse is here! Acceptance is first, survival is second, but in the end can anyone escape death itself? Or will they all join the Unnatural Dead?

The zombie genre has boomed over the recent years. I’m not sure what precipitated it considering “Night of the Living Dead” came out 43 years ago, but I used to work for a prominent book store chain and during my tenure there was considered the zombie “expert”. And let me tell you, once “World War Z” by Max Brooks hit, we couldn’t make enough room on the shelves for all the zombie fiction that was coming in. Some of it was good, some of it was what you’d expect, but all of it sold. People couldn’t get enough of it. The same kind of thing happened with sensitive vampires (ugh).

Here’s the deal though, “Night of the Living Dead” gave us the launch pad for that horrifying scenario, the foundation from which all zombie fiction stems, that made me a bit sketchy when going to graveyards. As Romero continued his movies he tweaked the formula, making each one a unique story on its own. All of them had the same foundation but told completely different stories depending on what aspect of the human condition he was putting under the microscope.

Then Max Brooks turned the genre on its backside and showed us a narrative that took place over a decade, from outbreak to contamination to containment, through the eyes of an eclectic cast of individuals from around the world.

My point is this: if you’re going to write about zombies you must write something new and refreshing that isn’t just regurgitating a 43 year old story. “The Unnatural Dead” is what is happening in the UK when the story of “Night of the Living Dead” is happening on the other side of the world. The above synopsis breaks down what we already know about a zombie apocalypse: “Acceptance is first, survival is second…” What’s third? That’s what I want to read about. The best chapter in the book told the story of a single zombie from before infection to infection through to his death. The next chapter started with the guy that killed him. THAT was AWESOME. That sucked me in so quick I almost got vertigo. Yes. More of that please.

I think the book could have been longer. I was only given time to be vested in a couple of characters and was just getting into their identities when the book ended. What that says, by the way, is that Mr. Mills has a talent that snuck up on me and bit me on the arm (…sorry….couldn’t resist). If you can’t write, you can’t solicit those emotions in someone and he did in me. Frustrations I had with the book, other than the recycled zombie plot, were mostly grammatical errors and typos (we all do them) that his editor should have been all over. That’s what editors are supposed to do: fix that stuff. Other than that, I will say that if an author is going to kill someone off, they shouldn’t p*ssyfoot around; they need to make a commitment and kill the bastard. It makes for really intense reading.

The bottom line is that if you can’t get enough of dead people eating live people, you’ll find plenty of it in “The Unnatural Dead” with some pretty awesome kill scenes to boot. But, with the exception of the aforementioned chapter, you’re going to get every zombie story you’ve ever seen or read before, but with a British accent.