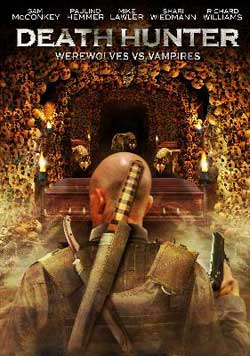 When his wife is abducted by a group of blood-thirsty Vampires, John Croix is left to die in a forgotten region of the desert. It is here where an unspeakable evil exists. Now, by no choice of his own, Croix will come face-to-face with the most terrifying creatures of the night. Still a man, but possessing all the strength and power of a werewolf when the moon is out, Croix becomes a reluctant hero for mankind when he learns that his wife may still be alive. Croix sets out on a mission to rescue his wife – venturing deeper and deeper into the Vampire’s lair- in his quest to save her before she is lost to the world of the undead forever.

Best line: (After pulling into the parking lot of a lone, shady bar at 3am, John Croix goes to exit his car when his wife tells him to hold on a sec, and asks, “Haven’t you seen Motel Hell?” He grabs a gun out of the glove box and says, “I haven’t seen Motel Hell, but Wolf Creek scared the Hell out of me.”

Take the huge bar from From Dusk Till Dawn (1996) and turn it in to a trailer trash, Irish biker bar. Take the concept of an unsuspecting everyman and some limbo lore from An American Werewolf in London (1981). Take the centuries old animosity between werewolves and vampires from the Underworld movies (2003, 2006, 2009 and the forthcoming 2012) and maybe Van Helsing (2004). Take the hybrid character from the Blade movies (1998, 2002, and 2004) and turn him from a black, tax-evading, bad-ass martial artist, human/vampire into a white, red-headed, human/werewolf. Then throw in a cross between Joel Grey from Remo Williams (1985), Kris Kristofferson, again from the Blade movies, and Sir Alec Guinness in Star Wars (1977) (but not quite as cool as any of them) for good measure. What do you get? You get the interesting yet mundane, the extravagant yet low-budget film that is Death Hunter: Werewolves vs. Vampires.

This is another movie that isn’t quite sure what it wants to be and consequently suffers for it. It’s all about commitment. At times it is dark and brooding, while other times it is light and whimsical. By the time our hero taps into his heroness, he’s gone from Opey Taylor to Wesley Snipes, complete with the Christian Bale, Dark Knight whisper-growl. And yet he’s not so uptight that he can’t joke around with the ditzy college students he rescues.

I don’t know how much cash is needed for movie making, but there are a couple of panoramic shots that look like they were taken from a helicopter (not an inexpensive affair I would imagine), while the green screen work is at best from an episode of Conan Obrien and at worst from an old Hitchcock movie (and please don’t misinterpret that; I speak of Hitchcock’s antiquated visual effects, not of his brilliant, innovative filmmaking). The point is, from beginning to end I couldn’t figure out what kind of movie I was watching.

That’s not to say there weren’t some good points. The acting wasn’t as bad as most low-budget efforts, and the script, though pedestrian, wasn’t painful to listen to. The cinematography made the most of the desert locale and though the prosthetic work left me kind of empty inside (I could see the seams) the CGI was near to impressive.

I think the real deal for me here is, like zombie movies, if you are going to delve into anything having to do with vampires, werewolves, or any combination of the two, it’s going to have to be REALLY amazing in order to get my attention. So it’s not Death Hunter: Werewolves vs. Vampires that I didn’t like so much as it was the subject. I know it’s selling right now (damn you Stephenie Meyer) but the market has been flooded and I’m gasping for air. Besides, the Underworld franchise really has those bases adeptly covered. However, if you just can’t get enough, and want to have a brain dead evening watching a tired genre, check this one out.