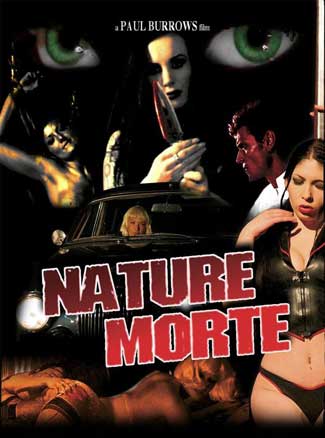 An undercover French cop and an American art critic travel to a mystical island to verify the source of a painting of a scene that only the infamous “Marseilles Monster” serial killer could have created .Artist John Stephensen (Romain Roll) is found dead next to the body of the tenth victim in a series of murders that had rocked the city of Marseille. Police rule his death a suicide and, when they uncover paintings of his murdered models, they name him as the killer that had been terrorizing Southern France.

London based art expert and author Oliver Davenport (Troy McFadden) lauds the murderous artist as the greatest painter of the 20th century and the paintings begin to change hands for astronomical sums. Two years later, when Davenport is approached by French police and asked for his opinion on a canvas, he confidently identifies it as a genuine Stephensen. But, when he finds the painting is no more than a few months old, doubt is cast as to whether Stephensen was solely responsible for the priceless art and the horrific murders. Davenport and French cop Capitaine Albert (Jeso Vial) pose as art collectors as the hunt for an elusive second man begins Their search leads them halfway across the world to the artist, Lec (Laurent Guyon), a Frenchman living in exile among the thieves, drug dealers and pimps of the tiny Asian island of Ladang Geta.

Davenport becomes increasingly obsessed with the art he loves and oblivious to the terrible truth behind its creation. His love for Lecs art brings him into conflict with Lecs lover, the heiress Blanche de Ladang (Carole Derrien), a woman who will do anything to keep him by her side. The story of art, theft, kidnap, murder and ultimately, love, continues in London where Davenport and Blanche compete for the object of their obsession.

His body now found by the local police and his 10th victim, mark him as the killer who has been murdering women through out France. Though there is some speculation by the local French police that prompt them to seek out the help of noted author Oliver Davenport 2 years later.

Well show’s over right? not so fast.
This whole ordeal opens an investigation into the deceased artist. Oliver, an art critic as well is put onto the case to find out if more paintings exist. This leads Oliver Davenport (Troy McFadden) from Mercaile to Thailand in which he begins a rather surreal voyage that includes sex, violence and indulgence. The purpose of this decadent journey seems to be in the interest of the art collector who wants to meet the artist and see the paintings for himself. The paintings bare similar likeness to the works of Stephensen’s work so an undercover operation is set into placed to discover if a forgery operation is involved.

The search takes Oliver and Capitaine Albert (Jeso Vial) to a tiny Asian island and an artist named Lec (Laurent Guyon),who claims to be the originator of these works. The question is, is Lec a serial killer in disguise or was Stephensen the killer they thought him to be? Beneath the lavish lifestyles lies something more sinister and crooked. The story indulges into this idea and where the journey takes you.

Directed by Paul Burrows, Nature Morte, An odd beast in itself is best described as hallucinary which flows from seedy undergrounds to the private rooms of artists and drug abuse. It appears that life is one big constant on the edge fringing on wealth, murder and artistry. The cinematography by Ryan Godard and Gwynn Clark is bold and adventurous, only showing the viewers pieces of larger puzzles that one must blend to get coherence. A story is present, though its done in a way that is narratively off center and strangely dark toned. With gothic overtones abound, we are given a viewing experience that is unlike most contemporary works. Partial art house and partial murder mystery this films demands a close look by film connoisseurs. Much of it’s eeriness comes as a result of a rather narrow film palette which showcases dark blacks and contrasted whites leaving many scenes lost in between the contrasted lighting.

Even in violent acts they are flashed by rather than shoved down your throat leaving a bit of unseen moments to the imagination or lost in the shadows of the cinematic’s. My guess is most viewers will lose it completely or will get drawn into to the surreal world that Burrrows has painted on screen for us. A bit of Eurosleaze combined with noire moments and modern aesthetics makes this a truly unique piece to behold.