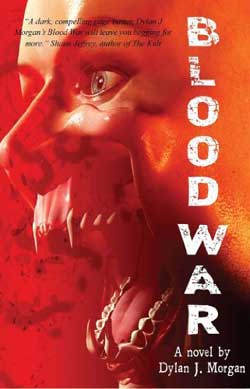 The novel Blood War by Dylan J. Morgan is the second novel I have read by this up and coming author (Hosts was the first and it was excellent). First off I must say that Dylan J. Morgan has an excellent talent for writing and actually has a wonderful grasp on the English language, which is hard to find in today’s “slang-driven” society. His word choices are descriptive as well as easy to understand, meaning that he doesn’t write “over people’s heads”. Also, he is obviously a world traveler as he can paint very detailed mental pictures of various towns and countries throughout the world. This talent has allowed him to tell an excellent story like the one in Blood War.

Although at first I was a little worried about whether I would like this novel or not, merely because it was based on a struggle between vampires and werewolves (the market is saturated with this type of story), I was actually very pleasantly surprised. This story is about vampires and werewolves and their age-old struggle, but it is also about both species’ utter disdain for a third species called hybrids (werewolf and vampire cross-breeds). These hybrids are a vicious breed that believes they are supreme and carry a huge sense of entitlement.

The story actually begins in the thirteenth century and quickly moves ahead through the centuries showing the early struggle of werewolves and vampires and the birth of the hybrids. For those who are not a fan of period pieces, fear not because this story accelerates quickly to modern times. There are three books within this novel: “Book One: The Freaks Come Out at 9 and it’s 20 to 10”, “Book Two: Monster’s and Mortals”, and “Book Three: Last Stand”. Each of these books are also split up into chapters (although not marked as such) that start with either a date and location or just a location (this helps put the reader in the mindset of the location of each part of the story).

There are also several different characters throughout the novel, some werewolves, some vampires, some hybrids, and others humans. At first, I will admit, I was a little worried about the fact that there were so many different characters and that their stories might get a little confusing. My concerns were soon quelled as stories of each character began to cross and intertwine with that of other characters. The great thing about this novel is that we get various perspectives through each of these characters giving us the ability to empathize with all species.

The werewolves, in this novel, are hulking and ferocious, the kind of creature that you would not want to run across on a dark night. The vampires are ferocious yet restrained with the ability to go out in the daylight although not huge fans of the sunshine. The hybrids are the oppressed breed yet they are confident in their ability to overthrow the other two species. The hybrids are a strange mutation of werewolf and vampire yet some hybrids carry a dominant werewolf gene while others a dominant vampire gene. With the c**kiness and over-confidence of all three species it’s no wonder that a war was waged between them.

Whether the story takes place in Italy, Germany, Norway, New Zealand, or the United States each location is described in great detail. We, the reader, get a chance to travel the world throughout this novel which makes the story even more exciting. Also we get the idea that the three supernatural species span the world inhabiting even the most mundane of towns.

Various moods are covered in the text, ranging from gory, to suspenseful, and even sensual. The gore is necessary to the plot as it shows just how brutal each species can be. The suspense keeps you reading, wanting to know what will happen to the various characters next. The sensuality gives the story some extra texture and a sexy flair (and as we all know sex sells).

I have to say that this was one hell of a novel and that Dylan J. Morgan has serious potential to become a best-selling author. His natural talent for story telling is evident throughout the pages of each of his books. This book is a must have for any horror enthusiast and especially for those that are tired of the same old crap flooding the market. I know that if you pick this novel up you will definitely not be disappointed. 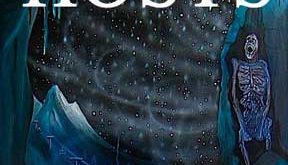