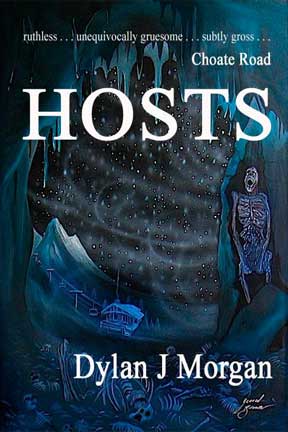 Dylan J Morgan’s Hosts is the novel that, once I picked it up, I couldn’t put it down. It’s an exciting, brutal, gory, and an even somewhat romantic story. I know that all of these adjectives don’t normally go together to describe one singular thing but this book is different. I was gripped with curiosity and intrigue as I plowed through the pages of this thriller/sci-fi-esque novel.

This novel is set in the middle of a brutal Canadian winter storm in a small town called Snow Peak. A town of only a few hundred, it is nestled within a mountain landscape of which draws crowds of skiers at winter time. Our main characters of this story are the town’s only active doctor, Lauren Kemper, and the town’s sheriff, Richard Wade.

Doctor Kemper is called in to give medical care for an anthropologist named Marianne White, whom is stricken with a terrible “disease” while studying a primitive man found on an archaeological dig. What doctor Kemper realizes, after examining the woman that something terrible is lurking inside of the woman’s body. Something that was once living inside the primitive man’s body and incased in ice is now living inside of Professor White.

After a terrible undiscovered parasite escapes Professor White’s body it worms its way into the towns sewer system and all hell begins to break loose. While doctor Kemper and Sheriff Wade begin trying to track and contain the primitive parasite a dark character from Lauren Kemper’s past comes back into her life. Malcolm MacDonald, Lauren’s abusive ex-husband and the man funding the dig, is called in by archaeologist Steven Bostwick to witness the “amazing” find. Malcolm’s greed and need for vengeance takes over and he becomes another wrench thrown into an already frightful situation.

As the parasites make their way through the town’s sewer system, they find there way out through toilets, showers, and sinks to infect the residents and visitors of Snow Peak. The parasite seeks out hosts, the people in town, and worms their way into human bodies through any orifice possible. The parasites, once inside the body, then breed and their offspring forcefully birth themselves out of the host bodies.

Other character’s although not as substantial, pepper the plot of this story. Retired doctor Walter Anderson, the former doctor of Snow Peak and current drunk, assists doctor Kemper in giving medical aid; he’s also one of the first witnesses of the gruesome parasite that infected Marianne White. Steven Bostwick, the archaeologist and uncaring boyfriend to Marianne White, is a man bent on becoming the top name in archaeology and acquiring fame and fortune no matter the expense. Danielle Hamilton, an associate of Malcolm’s, also comes into play later in the story. As well as reporter Todd Boone, who is called by Malcolm to report on the find and later wishes to expose a possible military cover-up of the situation in Snow Peak.

A very protective and caring Sheriff Wade begins falling head-over-feet for doctor Kemper and he will do anything to get her to safety. The duo’s feelings become stronger as they get thrown deeper into a deadly situation. Richard and Lauren prove to be an interesting set of characters whose emotions run on high through the majority of this story.

I have to say that I would liken Morgan’s writing style to that of Iris Johansen and Tami Hoag, both two of my very favorite writers. I was so engulfed in this novel that it took me only a couple of days to read it through. I’ve read many novels in my day but this one definitely held my interest completely and I could not wait to see how everything turned out. I am very excited to read anything else by author Dylan J Morgan and hope that once you read this review that you too will feel the same and want to get a hold of this novel. 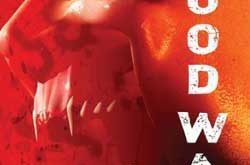