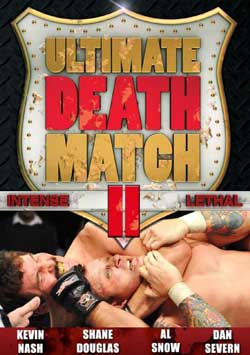 A wrestling promoter who is desperate to gain fan support for his wrestling promotion comes up with a unique way to attract fans. In an attempt to get away from the image of “sports entertainment” that wrestling has been associated with in recent years he holds an elimination tournament where the competitors in the final match battle to the death. Featuring wrestling greats such as Al Snow, Shane Douglas, “The Boogie Woogie Man” Jimmy Valiant, and many others, wrestling fans everywhere are sure to appreciate this film.

Other than horror films and comic books, my other great love in life has always been wrestling. I remember watching WWF, NWA, and USWA with my grandfather and favorite uncle for hours when I was younger and I have many fond memories of watching my idol, the late, great Mr. Perfect (Curt Henning) battle the likes of Tito Santana and Kerry Von Erich on Saturday mornings for the Intercontinental title. I actually wanted to be a wrestler at one point but I never went through with it (one of the many regrets I have in this lifetime). I have always been a wrestling fan and I hate it when some asshole calls it fake or says that it is just for uneducated mountain folks who have no teeth and have sexual relations with their relatives. I have defended wrestling my entire life, and I have a feeling that the folks behind “Ultimate Death Match 2” have done the same. I really enjoyed this movie as it is obvious that it was made by true wrestling fans, and it is obvious the filmmakers have a strong love for the business.

One of the things that I really liked about it was just the basic idea behind it. Old school wrestling that I grew up with that was focused more on actual wrestling than storylines is a dying art, and the filmmakers are well aware of this. I could actually see a promoter of a struggling wrestling company attempting to do something like a tournament where someone dies at the end just to get away from the sports entertainment element of the business that WWF (I refuse to call it WWE) has thrived on for the last several decades. I like the fact that the tournament is set up to where only the last match is a death match, as I think that if anyone else had done this movie they would have gone the clichéd route of every match having someone die until there was only one person alive at the end. I thought that the premise was pretty damn original and creative, and I think that the true wrestling fans out there will really dig this movie.

Another thing that I really dug about the movie was the fact that you get to see a lot of old school wrestlers that you haven’t seen in a while. We get Al Snow (who is a great guy, I met him a few years back and he is a class act), Kid Kash (sorely underused in WWF in my opinion), Jimmy Valiant, Raven, Lodi, Shane Douglas, and some others. It was also very cool to see the old USWA footage from the past too as it really brought back a lot of great memories for me, and I am sure it will for other wrestling fans. Seeing all these guys and the old footage made me feel very nostalgic and long for the good old days of wrestling from the 80’s and 90’s. 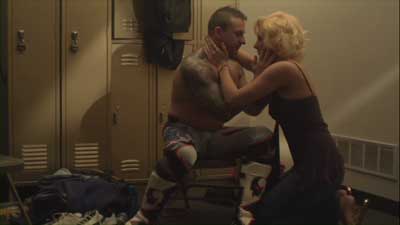 “Ultimate Death Match 2” was shot in my home state of Kentucky, and I thought that was pretty damn cool as well. It was filmed in Louisville where Ohio Valley Wrestling (which at one time was a training ground for WWF) television tapings are done on a weekly basis. I live like a little over a half hour from the arena and have always thought that it was awesome that such an important wrestling promotion was basically just right down the road from me. If you are into OVW and pay attention you will see some familiar faces and hear some familiar voices throughout the movie, which I thought pretty much rocked (my wife and I are actually in Tim Ritter’s newest movie “Truth or Dare 4: Deadly Dares with Roni Jonah who appears in “Ultimate Death Match 2,” but unfortunately we didn’t have a scene with her so we didn’t get to meet her while we were filming).

I really dug this movie, and I think that true wrestling fans will too. It is a million times better than any movie featuring Hulk Hogan or the overrated, annoying Dwayne “The Rock” Johnson, and I put it up there with the classic wrestling film “Beyond the Mat”. While it is not a horror film, I think that most horror fans will actually dig it as well. It is essentially a love letter to the world of wrestling, and as a wrestling fan I feel very lucky to have gotten a chance to check it out. I highly recommend it if you are a wrestling fan (or even if you aren’t) as I think that there is something about it everyone will enjoy. Check it out, and be prepared to be entertained.