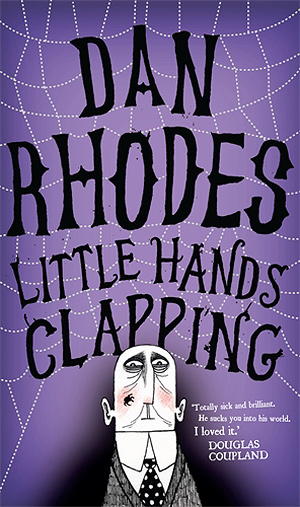 Dan Rhodes writes like Roald Dahl on some bad acid. I say that as a compliment. The story begins by introducing us to a sinister old man who survives on a diet of chocolate cake and spiders. He’s the curator at a German museum dedicated to suicide.

The museum is supposed to be a deterrent. However such is the bleakness of the exhibits that, instead, it finds itself acting as a catalyst to the poor souls it seeks to discourage. I’d like nothing more than to share further details of this highly inventive narrative, but it would spoil the pleasure of discovering this yourself.

There are times when the sheer morbidity of this book may test you. The reason you continue is that the author feeds you a regular supply of giggles to counteract the shudders. The gruesome range of subject matter includes, in addition to suicide, a self-help group for the eternally damned and a penis-eating dog. Seriously.

But like the fatally curious customer at the creepy circus tent, you can’t help but wander in. Enter this grotesque little universe and despite the blackness all around, you’ll still find it a life-affirming and heart-warming experience. W

hilst I can justify a review on this site, this isn’t a horror genre book,  more a literary experience that just happens to delve into some very dark places.  In fact I’d go so far to say that by the end you’ll be clapping your own little hands with glee. Five black stars.