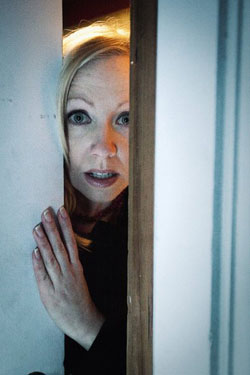 QUICK FIX
In this six and a half minute short film set to the song Horror of Our Love by the band Ludo, an unstoppable killer plays Hack ‘N Slash with a group of campers in the forest before falling in love with the last-surviving hot blonde. Needless to say, all she’s concerned with is getting away and surviving the night, and is too scared to realize that she has a new potential suitor.

So what’s a love-struck monster to do? Time after time, our beloved killer tries to show her in his own special way how much he cares for her, and time after time he’s shot down faster than a cross-eyed jet pilot. In the immortal words of Lloyd Dobbler, “I gave her my heart, she gave me a pen…”

I feel the need to share this story right out of the gate – as my regular reader knows all too well by now (love ya, Mom!!!), my 8-year old daughter is a chip off the old psycho and is a horror movie nut, so Saturday nights at my house are reserved for schlocky SyFy Channel premieres with her, and you know this, man…so I won’t go into that again.

I know I’ll never be Father Of The Year for things like that, but who gives a turkey? I know I’m her hero (well, me, and Sawyer from LOST), and that’s all that matters to me. But anyways, the story is this – upon receiving a copy of this kickass short and watching it on the computer and loving it so much, I decided to get a second opinion.

There has not been a night go by since that night that she hasn’t looked at me with those big puppy dog eyes, batted those extra-long patented McGee family trait eyelashes, and flashed that sideways Indiana Jones-style smirk – the kind of look that used to only be reserved for when she wanted to watch a Bruce Campbell flick – and pointed downstairs. That’s when I know tis time to go watch “HOOL” again, and to be honest, I look forward to it just as much as she does!

I’m not the least bit shy about saying that I’ve been an admitted fan of Dave Reda’s for years now – I love his acting, his directing style, now his writing style too, and I thought BIT PARTS was one of the best indie horror films I’d seen in a very long while when first I caught it back in early 2007…and he’s done nothing but cemented those opinions for me with his newest short here. And how bout Kate Melia as the object of our lovelorn monster’s desire? Well HELLO, Nurse!!! A beautiful and talented woman that I had never heard of before, but will be damn sure to keep my eyes open for in the future. It says an assload about a performer’s acting ability (I’m talking both Reda AND Melia here) to be able to convey emotions and get the points of the story across to an audience with nothing but the look in their eyes and their body language, and these two pull it off perfectly!!!

To the best of my knowledge, this short is not available to the public yet, as Mr. Reda is gearing up for film festival submissions first (and I know he’s got a winner on his hands here) before unleashing it on eagerly awaiting rabid horror fans. But why take my word for it? You can keep up with all things that are all Dave, all night, right here:

And I would be remiss if I didn’t mention the inspiration behind this whole project to start with – the band LUDO, who wrote the song Horror of Our Love. This song has so many double meanings to the lyrics, and is so damned entertaining and fun to listen to over and over that it’s no shock at all that a horror love story video was spawned from it. They’re a great band, to say the least, and you can keep up with everything they do here:

Check these guys out, fan them on Facebook, and show them the horror of YOUR love!!

I haven’t had my ass kicked by a short film – of any kind – in years like I have this one. There are so many, so VERY many, horror-centric gags packed into this one little short film which make it not only entertaining to watch over and over again, but also makes it hilarious to the true fan of the genre to boot. And I wish I could share just one of said gags with you right now, but no can do folks. I made a promise to Dave, and I meant what I said and I said what I meant, and this reviewer is faithful – one hundred percent. But trust me, true believers – when this bad boy of a horror tribute/music video/love story is made available to the public, DO NOT MISS OUT ON IT!!!!