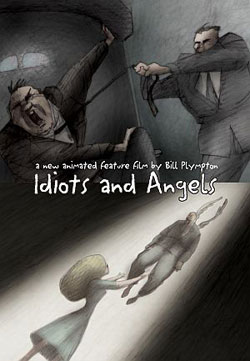 Angel is a selfish, abusive, morally bankrupt man who hangs out as his local bar, berating the other patrons. One day, Angel mysteriously wakes up with a pair of wings on his back. The wings make him do good deeds, contrary to his nature. He desperately tries to rid himself of the good wings, but eventually finds himself fighting those who view the wings as their ticket to fame and fortune.

Angels are usually stereotypically saints from heaven, whom are here for a purpose of spreading good faith on ones around us. What if an angel is one of us? What would happen if we lived our lives in sin to one day form into the one that must deliver good to all? This is the case in Bill Plympton’s animated feature-length film “Idiots and Angels,” where a man with crude values suddenly becomes an angel, and must save the society from the real cruelty in the world.

The main protagonist, who is tagged Angel on the website, is a man of ritualistic schedule. He wakes up every morning with a fight between his alarm clock and bird chirping, takes a shower, eats his breakfast, and battles with city traffic. A humorous scene is shown, where he battles with a man over a parking spot that was stolen from him. Angel resolves the issue by lighting a piece of cloth, and causing the car to explode by stuffing the cloth in the gas tank as the other driver frantically drives away.

Angel finishes his daily routine, by taking his spot at the bar he is a regular at. The usual cast of characters is there, including: a fat woman who dreams of being a burlesque dancer, a mop girl who is married to the bartender, and the bartender. At one point, the bartender leaves the room, and the mop girl bends down to clean. Angel is visually turned on by this, and mounts her like a horse. She bites him, and he falls back as the bartender returns, and begs them to make up, due to the bartender not wanting to lose in patrons. This day was a prime example of Angel’s morally corrupt actions, and he goes to bed finishing his day.

The next day, Angel notices he has small wings attached to his back, and he painfully shaves them off with a razor, leaving little white nubs. He makes his way back to the bar, and ends up saving the mop girl from falling off the bar after having a lewd daydream about her. The bartender immediately points to the picture of him and the mop girl on the day of matrimony, and Angel lets her get back to her work. When a man sits next to him, and fans away his smoke in an annoying fashion, Angel gets his revenge by sticking his cigarette in the other mans drink. This causes the man’s head to catch fire, and Angel cackles at him.

Angel wakes up the next morning with even bigger wings. He tries to tape them down, but this is no avail when the wings pop out of his coat, and are shown to the bar patrons. They all laugh at him, besides the mop girl that friendly tends to his anger. He leaves and goes to the doctor see if they can be removed. The doctor is stunned by the wings, but also sees Angel as a thing of profit. Angel just wants to be unseen, and runs from the doctor who chases him in fear of losing a free ride of money and fame. Angel tries to use his wings for morally corrupt acts, but finally learns that he can only help people from now on after being punished for doing wrong over and over again. He races to save his life, as people become enamored with his wings, and want to know what it would be like to have those appendages. The end result is a good lesson in humanity, and a new life for Angel.

Bill Plympton’s “Idiots and Angels” is a film of no dialogue, but the characters portrayed their thoughts and speech through actions and daydreams. A man’s journey to be famous and popular amongst women is fairly exhibited throughout the film, as the men battle for fame amongst the city. The movie has plenty of animated violence and gore, with Angel exploring any way to get rid of the wings and explosives that are used towards the end to eliminate the bartender’s competition. Plympton’s “Idiots and Angels” shows the capability of a man’s struggle to live morally within a world that breeds immorality. 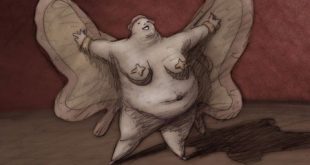