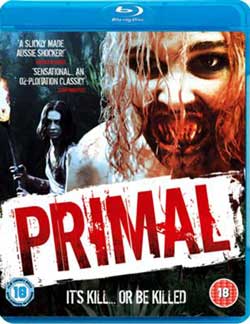 Six friends go on a anthropologic journey to study a remote ancient rock painting. Their excitement vanishes when one of them becomes delirious after skinny-dipping in the waterhole. Feverish bleeding & confused she physically and mentally regresses to a vicious predatory state. She has gone primal. Her lover and friends realize they are the prey as she savagely hunts them down. Their only hope of survival is through a cave where one of them learns too late the meaning of the ancient rock art they came to study.

The Black Saint has a severely sprained left wrist. How it happened is besides the point. I make this point because I want all of you who have not become acolytes loyal to me to realize the lengths I go through in typing up these reviews so that you don’t waste your time watching bad movies. Come on people!! Join my army & become part of a movement that will rule the world one day. One day very soon….

Today, I suffer with great pain to give you the lowdown on an Australian film called “Primal”. And I am pleased to report that it is a winner! “Primal” tells the story of six friends who travel to a remote part of the outback in Australia to study some ancient rock paintings. In actuality, the film starts out with the graphic “12,000 years ago” as we see what I assume to be a caveman creating this cave art. He’s so focused on it that he doesn’t realize that someone is creeping up behind him & summarily slaughters him. Then we get a time lapse shot of the cave where we see basically nothing changing until it stops and the words “The Present” on the screen. So now we know how remote this area is, it’s been virtually untouched/unchanged or undiscovered in thousands of years. The Saint is officially intrigued now…

One of our intrepid six has discovered the spot though & is driving there with 5 of his friends who are accompanying him. It’s never really mentioned if they’re there to actually help him study the cave paintings or just go on an adventure but that’s besides the point. Once they arrive at the cave entrance they set up camp & Dace (the Anthropology student) starts to get to work. One of the friends on the trip is a comely young lass by the name of Anya(Zoe Tuckwell-Smith) and as the others go into the cave to explore she has an anxiety attack.

It seems she has a severe case of claustrophobia from an incident in her childhood. She starts to hyperventilate & has to go back outside. Some of the others make some snide remarks but it’s not a dealbreaker for any of them & they go about their business. Their first night there, one of them, Mel (Krew Boylan) decides to go skinny dipping in a small lake nearby the camp. when she comes out, she got Leeches all over her & starts screaming bloody murder. Her boyfriend, Chad (Lindsay Farris) & Dace (Wil Traval) pull them off of her & suggest that she just stay out of the water from here on out.

The next day as Dace & Anya are studying the cave art something small runs by & bites Anya on the ankle. Dace manages to kill it with a rock only to find out it is a small rabbit. A small rabbit with fangs that look a lot like the fangs on the possessed movie goers in Lamberto Bava’s “Demons”. It reminded me of the rabbit from “Monty Python & The Holy Grail” (That rabbit’s dynamite)! Dace returns to the camp with it & spears it on a branch, why? I don’t know. He mentions something about “Marking their territory” with it but I found that to be a bit trite & cruel actually. The campers have also noticed that the nits that are flying about are pretty hard core as well, finding part of a plastic bottle that is seemingly being eaten by them. But this too, doesn’t faze them much.

What does begin to bother them is the fever that Mel has suddenly gotten. She’s extremely hot & is hallucinating a bit. Dace just wants to give her some medicine & let her rest but the others want to get her to a doctor. They win out when her teeth start falling out & her mouth starts bleeding uncontrollably. They carry her back to the car only to find that the nits have eaten through the tires, so they can’t drive back. They return her to the camp & do the best they can for her. The next morning one of them find Mel up with her back turned to them seemingly eating something. When she turns around we find that she’s been eating the rabbit that Dace had speared on the stick the night before. In addition all her original teeth have fallen out & have been replaced by the same long fangs that the rabbit had (The nits have them too but they’re so tiny it takes them a lot longer to make a dent in anything of substance).

Apparently there is something in the lake water that transforms whoever gets in it or drinks it in to their primal state. Now Mel is a screaming, bestial carnivore who wants to eat…her friends. She’s also gotten extremely strong & can jump long distances to get at her prey. She attacks & bites chunks out her friends but is kept at bay by fire. She runs away, but now her friends have a problem…what to do with her? Dace wants to kill her immediately but is voted down by his friends. So they decide to set a trap for her to capture her & get her some help.

The trap works but they never thought about her newly acquired teeth & claws to rip herself out of the trap & run away. There is a great scene where she hunts & kills a Kangaroo, eats half of it & takes the other half to the foot of the cave entrance, where it is seemingly ….absorbed by the cave floor. But by what? As the drama unfolds, Dace goes into the lake to escape an attack & he too starts to change into his primal state. it is only then that it is decided that Dace & Mel have to be killed. In a funny scene, the survivors decide to draw straws to see who will kill Dace before his transformation is complete. Anya gets the short straw but cannot bring herself to kill him. Meanwhile, Mel is watching close by & leaps in to claim Dace’s body before they can kill him. Dace & Mel are two of a kind now & Mel is protecting him from the others. Now the both of them are stalking the others & they need to find a way out. But with no car & stuck in the middle of nowhere, where will they go?

“Primal” is a lot of fun & offers up a decent amount of gore along with some good acting. But the story is a bit odd since we’re never told what is it in the water that’s making whatever ingests it regress. In the last third of the movie, we find Anya alone in the cave looking for a way out (You know she’s going to end up there as soon as we learn she’s claustrophobic). And there is something in there with her. The same something that ingested the kangaroo (& one of the members of the party as well, later in the film). The same something that the caveman in the beginning of the film was drawing on the outside of the cave. He was trying to draw something of a “Do Not Enter” sign to keep people out of the cave. What it is is never explained but we see it. I’m not going to try & describe it but I will say that it’s a poorly created CGI effect, one of the few bad elements of the film. But since we don’t see it till nearly the end of the film it’s not a big deal. And it’s actions once we see it are pretty f*cking funny as well.

“Primal” works well on a few levels. How far would you go for a friend? What was early man actually like? Were they as primal as depicted here? The nature of panic also comes into play during the film second half. When is it time to panic? And if you do…then what? Curl up & die or fight back? I liked theses elements What I didn’t like were certain inconsistencies in the film. For instance, if the nits were in their primal state as well, why didn’t they bite any of the characters? They were feasting on everything else. In addition, the cave paintings were on the outside of the cave which makes sense considering what was in the cave. But after 12,000 years wouldn’t they have been washed away by rain & (possibly) wind erosion? Did cavemen have waterproof paint back then? I know it sounds like I’m being a little picky but I think these are viable questions. And what the f*ck is in that cave? When you see it you’ll know what I mean. We’re never told where it came from or what it really is. It is poorly rendered CGI though & that takes some of the kick out of it for me.

All of the actors perform well & the two who get to go all primal on everyone else seem to be relishing their roles a great deal & they (literally) run with them. The direction & screenplay by Josh Reed are both well executed if a bit silly on the script side. But “Primal” does deliver the goods to those who are willing to give it a go. It’s not going to win any awards but it does entertain in a big way & it is engrossing as well. The Black Saint gives “Primal” three shrouds out of five. I thought it was a good, scary little film with some laughs & some interesting ideas behind it also. It’s well worth your time to see it if it crosses your path.