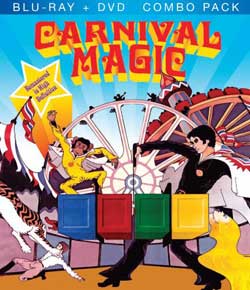 Long thought lost, Carnival Magic (1982) remained a legend among underground film fans … until 2009, when a 35mm print was discovered in an old warehouse. Now available for the first time in any home entertainment format, this cult favorite shines again, fully-restored and in high definition. In one of the most bizarre kid s films ever made, Markov the Magnificent (Don Stewart, TV s Guiding Light, Knots Landing, Dragnet) is a talented conjurer … but his career is fading. Partnering with an über-intelligent simian sidekick, Alexander the Great ( Alex ), a chimp with the ability to speak, the duo quickly becomes a small-time circus biggest draw. But when jealousies arise, they must defeat a drunken rival and an evil doctor to stay together … and alive. From maverick B-movie director Al Adamson and featuring a parade of colorful carny folk portrayed by Regina Carrol (Doctor Dracula, Black Heat, Jessi s Girls), Jennifer Houlton (TV s The Doctors), Howard Segal (The Last Game) and more. Bonus features include audio commentary with Cult Film Historian Joe Rubin and Producer Elvin Feltner, interview with Elvin Feltner, out takes, original movie art postcard, original TV trailer, theatrical trailer, before and after restoration demo, 5.1 audio mix and Spanish subtitles

1982 saw the arrival of a uniquely bizarre children’s film emerge like to raised eyebrows and murmurs of WTF. The film itself may not exactly fit within our scheme of genre films, but it does hold a pretty firm place in the cult film section of our site. The film is almost mistakenly Rated G featuring Markov the Magnificent and one odd talking ape, Alexander the Great. You’ll have to keep in mind, that we are just coming off the tail end of the Sid and Marty Kroff era that threw some pretty twisted scenarios at us. In addition, and not too long ago…. we left behind the “Smokey and the Bandit” circa along a healthy dose of Clint Eastwood and his “Every which Way But Loose” films.  So the thoughts still lingered with that of ape sidekicks and silly police chases. Well… Carnival Magic was indeed a children show that focused around the abilities of a talking ape. His mentor Markov, a struggling magician, decided hiding the monkey was no longer an option as he was tired of having to leave his carnival shows every few months. 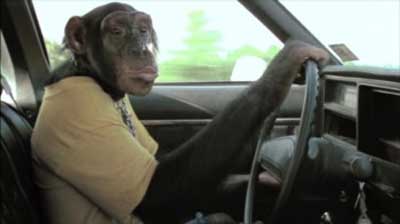 The film itself is pretty typical cheese with bad dialog and a Saturday-afternoon-movie-of-the-week-script that you might see after the cartoon hours had passed. Though what stands out is the racy amount of big breasted assistants sporting tiny bra-wearing outfits featuring women who almost look like they just crawled out of David Lee Roth videos. This might have “something” to do with the Loni Anderson influence that was nearing its final season at that time. In any case, it reminded me of a hodgepodge of era influences integrated into a un expecting children’s film.

The pants are tight, the logic at times illogical and the script is tainted with a Brady Bunch sort of goofiness. From the impression of the DVD, I expected some lost gem of a film. What I gathered after watching the movie is that it is just a Saturday After noon-style-children’s film that really isn’t properly geared to its target audience.

The movie mostly bases itself around the talking monkey and his master. The act begins to draw in crowds which doesn’t sit too well with the previous main attraction feature act. When a scientist gets wind of a talking ape he becomes obsessed with acquiring the ape for scientific experimentation. 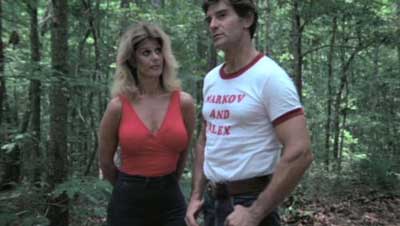 This of course doesn’t sit well with Markov and the rest of circus. Though in an act of defiance and jealousy, the lion tamer kidnaps the monkey, sells him off to the scientist and heads for the road. There is not much more beyond this scenario to inspire readers of this review. Though there is a certain element of campiness and 80’s style trade marking that make this presentation still an oddly funny experience. The open shirted hairy chested men wearing too-tight-pants combine nicely with the racy big breasted females. It makes you wonder what age group the movie was really catering too…. The action is pretty in line with the old Starsky and Hutch type TV shows and even features one scene where the lion tamer beats up his girlfriend. Ya, TV sure has changed.

Take the film in stride when acquiring it that its not gonna be a Napoleon Dynamite humor level feature. Its release signifies that the movie is able to make fun of itself just as it is if you can stay awake during the drama portions. Looking back now, I sure am glad that tv has evolved to a much more mature audience and presentation.