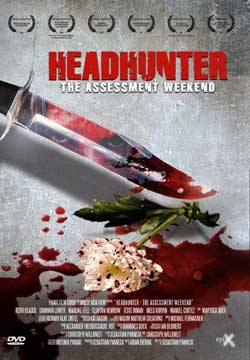 ﻿﻿﻿A motley group of business students in Berlin, Germany sign up for Takahashi Corp.’s assessment weekend, hoping to land one of the coveted spots with the consulting company. Under the watchful eye of a company psychologist, the team-working and improvisational skills of the aspirants will be put to the test in a survival-type situation. But nothing goes according to plan – the group arrives to find the base camp completely destroyed. Trapped in the woods with no food, no shelter and no way to communicate with the outside world, the real characters of the students come to light, as one by one, they start to lose their heads…
﻿
REVIEW:

A multi-national, multi-conglomerate, multi-gajillion dollar corporation lures potential candidates for employment to their HR Department for a recruitment video – which I must say totally reminded me of the found-footage films from LOST featuring Dr. Pierre Chang – which promises them that if they join the company, they must basically be winners who can think way outside the box and who love a great fight…sounds like the perfect job for me, actually. Anyway, to find the perfect employee, the Powers That Be decide that the best way to find their ultimate candidate is to send six lucky potentials out into the woods for an ultra-extreme recruitment getaway in order to see who’s the best thinker, fighter, WINNER, etc.

But when they get to their camp, of course it’s been wrecked and all but destroyed and then…now…their true colors come shining through, especially once a gun is introduced into the mix. The group becomes paranoid of each other and breaks off into their own factions, SURVIVOR-style. And when one of them finally snaps, sh*t spirals downhill and all of a sudden we’ve got a batsh*t crazy, “Nic Cage in WICKER MAN” style killer on our hands knocking off the recruitment competition left and right. Now why weren’t my office picnics ever that much fun??

RAMBLINGS
Now, I’m pretty sure I can tell what you’re thinking already…”Why don’t I just go watch my copy of SEVERANCE instead?” Well, sure…you could. It’s a great movie – one of my Top 25 favorites of the last decade. But why would you just automatically dismiss this one without giving it a chance just because the premise sounds somewhat similar? Sure, there’s many similarities as far as I’m concerned, but this is still a good flick that deserves your attention.

See, for me, one of my guilty pleasure subgenres is the “find an excuse to drop a bunch of smugly self-aware yuppie scum into the woods and kill them off one by one” flick. Some might call it the “Backwoods Horror” subgenre. Either way, that right there is a good time to me, my friends. Not too many times will it be done to my high standards of semi-coherent excellence though…SEVERANCE, of course knocked it out of the park. I really loved WRONG TURN 1 & 2 as well. And now here we have this little European low-budget indie horror gem called HEADHUNTER: THE ASSESSMENT WEEKEND to add to the pile of keepers. 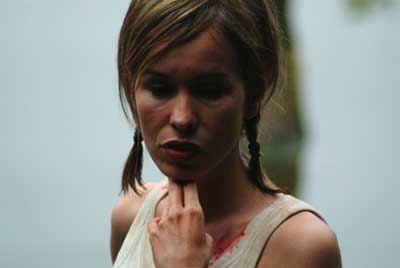 LAST WORDS
This fine flick is, of course, available almost everywhere, which is great news from where I sit. One more thing though, for those of you in the know – there are many other reviews I’ve read out there about this movie where the reviewers wound up loving the movie itself, then ultimately hating it because of the ending. Many times I will forgive a less-than-stellar ending if the ride getting to the destination was worth it. But this time out, I’m apparently in the minority…I dug it. I thought it was a fitting ending for the story told, so if you loyal readers actually trust my drunken judgment, don’t let the negative reviews stop you from adding this to your collection or at the very least, giving it a rental spin. It’s a bloody good, well-written piece of indie horror that will take you on a whirlwind ride, should you choose to let it do so…