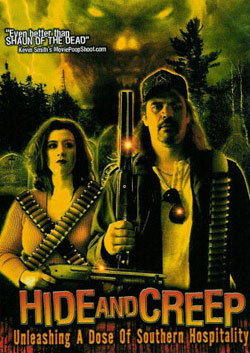 Unexpected visitors wake up the sleepy town of Thorsby, Ala., when a bloodthirsty army of the undead wreaks havoc in the streets, and the paranoid residents begin killing one another. With federal agents on the ground and flying saucers in the air, one thing’s for sure: Life in Thorsby will never be the same. This campy horror flick — the first full-length feature from Crewless Productions — is based on the short film “Birthday Call.”

QUICK FIX:
The residents of Thorsby, Alabama are having a very f*cked up day….a dude wakes up half-naked in a tree not knowing how he got there, all the popular movies are already checked out at the local video store, a UFO may or may not have flown over town the night before, there’s a not so stealth government agent skulking around town, the local diner has nothing but Pepsi when they should be serving Coke, and no one can enjoy the biggest college football game of the year thanks to sh*tty TV reception. Oh, and there’s also this little zombie apocalypse going on all over town too. What? I forget to mention that part?

RAMBLINGS:
I remember, years ago during a drunken haze at a friend’s house, catching this little gem in the wee hours of the morning on the Sci-Fi (now SyFy for some inexplicable yet hip and edgy reason) Channel and thinking to myself, “These bastards must have had a blast making this flick.” I also remember later trying to find it on DVD with no luck, thinking that it must have been broadcast to gage viewer response to see how popular it would be before giving it a proper release. Sadly, and shame on my goofy ass, I forgot about it after that. A couple years later, I learned that Asylum had released it on DVD back in ’05, but that it was discontinued by the time I discovered that. Which meant to me – a geek that prides himself on collecting little-known, obscure, and kickass indie films – that finding a copy of this for my own collection would be tougher than medically declaring Paris Hilton disease-free.

So, knowing how old this movie is (dates back to 2004, if memory serves), imagine my surprise to find it landing in my lap to review a couple days ago. “What the hell?”, I asked myself. But, far be it from me to take a good look at my T-Bone steak by sticking my head up a butcher’s ass – I popped it in and enjoyed it in all its commercial-free, blood & boob-soaked glory! And upon further research today, I discovered that the fine folks at Celebrity Video Distribution are giving this awesome flick the Special Edition treatment and re-releasing it on October 6th.

For my money, Chuck Hartsell is one of the finest indie actors on the block these days – his full on Randall Graves-style tirade over the phone to a dumbass video store customer unschooled in the classic zombie flicks is one of the sharpest written and best delivered scenes I’ve witnessed in a very long time. Melissa Bush was more than just a pretty face in the reluctant heroine role, finally stepping up and kicking ass when needed. Kyle Holman totally embodied Burt Gummer for his role as the local survivalist, and his speech to his daughter about what to say when intruders came knocking was one of the highlights of the flick to me. Chris Hartsell was hilarious – more worried about his newly restored vintage car that disappeared than about his girlfriend who also disappeared inside said car!

LAST WORDS:
Shot on location in Alabama for $26,000 (much less than Michael Bay’s on-location manicurist bill, no doubt), you would have thought this crew had a couple hundred thousand at least to work with. Sure, it’s far from perfect, but that’s part of HIDE AND CREEP’s inherent charm. Sharp dialogue, physical comedy, blood, boobs, everything you could possibly want in a zombie movie. So, zombie lovers, comedy lovers, and indie horror lovers, UNITE!! Its hilarious and holds up on repeat viewings, as I catch a new in-joke or culture reference every time that I’d somehow missed the time before, and it definitely deserves to be in your collection. Although I do highly disagree with one thing….Coke does not trump Pepsi, and Dr. Pepper beats them both. It also tastes much better with my daily breakfast dose of Captain Morgan!