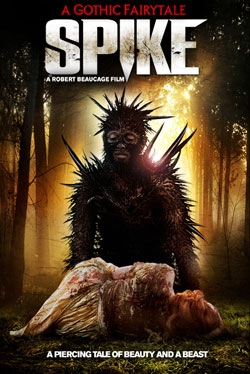 After skidding off the road in the dead of night, four friends find themselves lost in the forest and tangled in a twisted love story. As they are each picked off one by one by a bizarre beast it becomes clear that none of them will make it out of this forest alive; unless the one the monster so desires is left behind. Will they stick together and find their way out of the grips of this love sick monster or will they turn on each other and perish in this dark fairytale?

Do yourself a favor, if you decide you want to know more about the film “Spike: A Gothic Fairy Tale”, do not go to YouTube and look up the trailer.

The trailer does nothing for this film. In fact, when I viewed it, I felt the movie looked cheap, silly, and somewhat amateurish. So when I sat down to watch “Spike”, I was dreading it. I just plain did not want to watch the film. Thankfully, I was wrong and the film is actually really good. That isn’t to say this is my type of film, which it isn’t, but this one could very well find an audience and become a cult classic. Four friends are on a road trip in the middle of the night when their tire pops and the driver loses control, skidding to a stop in the woods.

The Boyfriend (Jared Edwards) gets out of the car to fix the tire and is attacked by some sort of creature. The Girl (Sarah Livingston Evans), His Sister (Ann-Marie Wayne), and Her Girlfriend (Nancy Corbo) try to see what happened and realize he has been stabbed in the throat by something. When they scramble to come up with a plan to help him, he disappears and a string of mysterious events and twists sets the film in motion. Spike (Edward Gusts) is not a creature at all. He is a man in love, a man that looks like a monster. A fairy tale in the vein of “Beauty and the Beast” or even “The Elephant Man”, with love and what it truly means, at its core.

I have one main gripe about this film. I hate to do it but I have to admit that the dialogue annoyed me, AT TIMES. That is a personal gripe though and there is a line in the film where the girl tells Spike that what he said was the cheesiest line ever heard. This tells me that writer/director Robert Beaucage was well aware of the territory he was delving into and poked a little fun at it. And to the casts credit, really sell the story and the dialogue works. The story revolves around Spike and the methods he chooses to try and win the love of The Girl. Edward and Sarah have a chemistry that comes across on-screen and are gifted performers.

The weight of the film hangs on their shoulders and they deliver. It’s a difficult film to review, I am trying to be vague since the major plot points deserve to be a surprise to the viewer. The script, which was written by Beaucage is lean and to the point. He leaves no time for the viewer to get bored and leaves plenty of time to develop the story and our main characters.

At the same time, there is much left to the imagination and a interesting back story that could be told. The film looks gorgeous, though it looks to be shot entirely at night, and lit in a way to illicit fear and wonder at the same time. The goth influenced score by Eric Santiestevan is haunting, beautiful, and reminded me of Argento’s Goblin era scores. In a good way, of course.

“Spike” may not be for everyone. There isn’t much for the gore fiends and it is a story about finding and holding on to the one you love, in a very different and bizarre way, but love none the less. It is an interesting take on the “Beauty and the Beast” formula with a darker twist and much more of a tragic story. And that is why it worked for me. I hate romance films but love tragic ones. Maybe that makes me a bit twisted, but if I wasn’t I probably wouldn’t be writing these reviews. Robert Beaucage is gonna be a talent to watch and “Spike” is definitely a film deserving of a cult following.