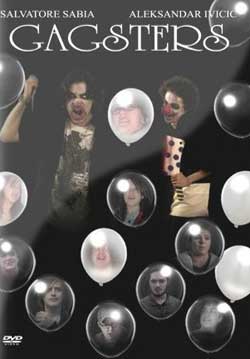 The Insomanic met up with actor/writer/director Aleksandar Ivicic the force behind the short comedy/horror film Gagsters: the Movie. The movie strongly enters the killer clown gene, which I think should have more entries as I am pretty scared of clowns. The storyline for the movie is about two brothers who are slightly more insane than should be allowed who go come across a killer dressed as a clown one day after being kicked out of their home. Instead of killing the two, the killer inspires them to follow in his footsteps. (this is all in a flashback we see later in the film). The movie begins with the two brothers dressing up as clowns and killing their older brother at which point they stalk a bunch of teens in their neighborhood. The older of the two brothers, Mitch, attempts to stalk and kill people in their own residence! (He fails. He is the comedic relief in the film). While the younger brother, Josh, stalks and murders teens on a camping trip! (He is the true horror aspect of the film). The film ends with a hilarious twist as well that plays during the credits.

Could you tell me about how you got involved in movie making?

When I was a kid, I use to always make up ridiculous stories about all sorts of things. Even as excuses for getting out of trouble. “The Dinosaur ate it” and I would always have some smart follow up such as “The dinosaur went back in time through his portal”. Eventually, I got into doing animations. I fell in love with being able to create characters and stories and bring them to life! I’d write little stories and create entire worlds just for the sake of a few characters I would draw. I use to always play around with camera; record, take pictures, all that fun stuff. One day for a middle school project for English class we were given the opportunity to create a short story or little movie on a topic long since forgotten by my blurry memory. I decided to do a film with my two partners and that’s where it all began! Since then I use to do little films and videos with my friends until one day it was all tragically lost when our family computer caught a virus and needed to be recovered. After a while my thirst for film making got the better of me and I continued to do film but this time was prepared! External hard drive, better camera, more actors. By my first year in High School I knew exactly what my future career was meant to be!

How did you get the idea for Gagsters?

After deciding to do a horror clown film I knew I wanted to add in comedy but also separated from the suspense. To do this, I created two separate characters who would represent each genre. The complete failure at killing, Mitch. The psycho murderer, Josh. I have made it my goal to complete one short film of every genre out there and with Gagsters I just knocked out two genres together! The idea originated from a clown film I watched as a child titled “It”. After watching a clown film at the Buffalo Screams Horror Film Festival I was inspired all over again to finally step down and do the film!

Is there something about Clowns you find creepy?

Everything! Coulrophobia! I’m terrified of clowns… Or well, use to be. After doing this project I think I’m a lot more fearful of hello kitty than a raging clown with a chainsaw… Which I probably should have had in the film now that I think about it. When I was young I watched the movie “It”. This left me to believe that the jolly colorful fellows weren’t so innocent or funny. The harder they laugh the more people they’ve probably brutally stabbed to death with whatever knives they have hidden within those abnormally sized shoes. As you can tell, I’m paranoid when it comes to those freaky abominations of ‘comedy’.

What sort of tone were you looking for?

Hilariously suspenseful! I wanted to incorporate both views of the clown kingdom. The happy go lucky “He’s a funny guy” views. And the paranoid “He MUST be hiding something behind that smile!” views. There are two tones to this film: Suspense and Comedy. For those with fear of clowns, some may even say this could be a Horror film. The older brother of the two clown murderers, Mitch, being the comedic relief. The younger brother, Josh, the deadly psycho slasher killer we are all so very fond (or sick) of. 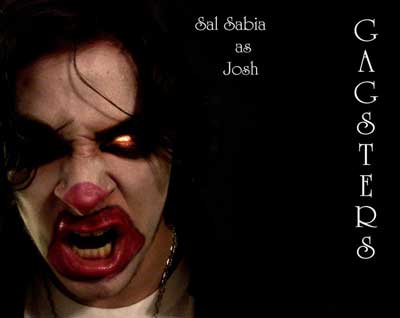 What was the process of casting the film?

Since the film was going to be your typical “Slasher” story, I figured we would need a bunch of teenagers to slaughter. I wanted a nice variety in the cast. A college football jock, a high school graduate who went straight into the working world, his sister who is still in high school, a foreign exchange student from Mexico, two high school lovers and a wannabe older and drink like the big boys cool kid. I tried to find those who best fit the profile that were within my reach, so I looked to my high school buddies that I graduated with and others who were still in school. The college football jock had to be a big guy, so that’s what I found. The actor, Kodie Hertel, has done and is still doing numerous plays throughout high school. He has a strong passion for acting and that’s exactly what I wanted. As far as the clowns go, I wanted a certain way both clowns were portrayed; ridiculously crazy. The thing that inspired me to create the Mitch character was a combination of my character from a Ghost Hunters spoof I played a role in and Dr. Rockzo from the adult swim cartoon comedy “Metalocalypse”. I decided to play this character myself. After seeing the performance of Salvatore Sabia in a previous feature film we shot, I knew automatically I wanted him to play the Josh character, who was suppose to be the more eerie and frightening of the two. We also did a few bonus scenes added after the original plot was put together. We needed parents for these two youngsters destined to become murderers in clown make up. The innocent ‘why don’t we all just get along’ mother was played by Kathy Murphy and the strict ‘I’ve had enough BS’ father was played by Michael O’Hear. After seeing them act on other sets and in other films I knew that they would be perfect for these two roles and am very happy they took part in the project!

Any funny stories from the filming?

Lots! A few very memorable ones. During our 3rd and longest day of shooting we filmed outside in the woods where the teenage characters were out preparing to camp out for the night! When we finally reached the first kill scene, we ran into a bit of trouble. Carlito played by Leo Wilson was having a very difficult time dying! A great actor but a terrible victim. We shot the scene over and over until we gave into Leo’s demands to punch him in the back as hard as Sal (playing Josh) could so he could play off his death more realistically. After another two of three tries we finally got it! The actual death attempts were hilarious and will be included in the bloopers of the DVD release. We may have also accidentally left bloodied up clothing with holes in them, a broken poll with blood all over it and a knife (all props) on our set before leaving…
Another was during our bonus scene shoot where we learned that some doors are meant to remain open! We found that out the hard way when Kathy (playing the mother of the two clown boys) tried to open the closet door on set to give the boys jackets before going out into the freezing cold. We watched Kathy struggle to force the door open before realizing it wasn’t a part of the act. The door was stuck! The blooper scene can be found here: www.facebook.com/video/video.php?v=177020382329260
During the shoot we also needed to test the mic… with an INTENSE argument over tacos! There’s nothing like a conversation that will make you hungry on set after the cook takes off. There have been a lot of other hilarious stunts but most will appear in the bloopers for you all to enjoy!

When is the premiere of the movie? And where will DVDs be available?

A premiere has yet to be planned for certain but I am shooting for the month of March. My goal is to premiere at the Screening Room Inc. in Amherst where the Buffalo Screams Horror Film Festival took place. This is around the time I was inspired to do Gagsters, so I figured it would be appropriate. Once DVD’s are available they will be sold on the website Kunaki.com. I’m also aiming for a couple other privately owned shops and the Guerilla Gallery in Buffalo. It will include the entire film, a few interviews with the cast and crew, bloopers, trailers for other films and some deleted scenes. Be on the look out for it! 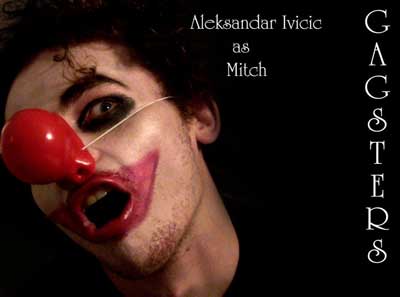 What are your future plans?

I’ve got quite a few plans. To sum them all up into one, I just want to get more involved. Not just do my own films, but act and help others with their projects. Acting and Editing is something I am looking to do for other projects more so than my own. Dig my way into the industry and do film as more than just a hobby. If I keep aim high maybe someday I’ll score. My goal is to become a film editor alongside being a writer, director and actor. Whether it’s commercials, short films, music videos or features. Filming is the very heart that keeps me alive and moving! In the less distant future my goal is to complete the script for an idea I’ve been putting together for a few months titled “Divinity”. To film the feature length experimental drama “State of Tranquility”. Get involved in more commercial projects and help local bands and artists create music videos to help promote their music to Record Labels. Enter both Gagsters and any other already finished or upcoming work in as many film festivals as possible. Get involved and help as many other struggling artists achieve that very goal. Act. Act. Act. Edit. Edit. Edit. Direct. Direct. Direct. Film. Film. Film. I’m fighting to turn this hobby into a career and work with many people. As Bruce Willis said in ‘The Fifth Element’… “Bada Bing Bada Boom”. My eyes are locked on for the future and there’s no turning back!

Thank you very much Aleks for your time and we look forward to more productions from Hot Iron Productions.

Here is a facebook page of the film: www.facebook.com/gagstersmovie