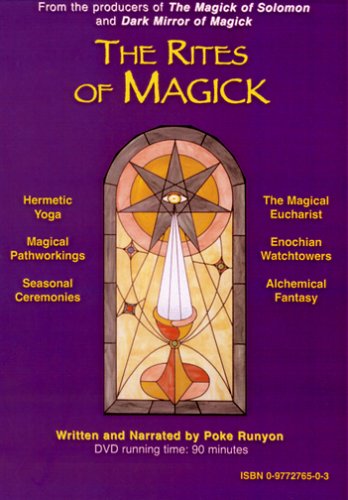 The Rites of Magick is a feature length (90 minute) dramatic documentary on the rites, ceremonies and meditative practices of America’s oldest continually operating Magical tradition: The Order of the Temple of Astarte in Southern California. The O.T.A. is the religious-fraternal order of The Church of the Hermetic Sciences incorporated in 1971. This production was filmed and video-recorded in temples, outdoor henges, and retreats of the Order from 1974 to the 21st century. It is divided into six chapters: Hermetic Yoga, Pathworkings, Seasonal Ceremonies, The Magical Eucharist, Enochian Watchtowers, and — as a special bonus feature — a surrealist Alchemical Fantasy from the talented avant-garde filmmaker Eric Bossick.

Okay, that’s it! Everyone has their limits & The Black Saint has just been pushed to his by his ever so amusing editor. Submitted to me for review for all of you is something called “The Rites Of Magick” (That’s the way it’s spelled on the credits). I call it “something” because it certainly isn’t a movie. It’s more of a…it’s kinda like a…aw f*ck, I don’t know what the f*ck this is But I can guarantee you that it’s not the least bit entertaining. I’m going to try & explain but this will be really quick so bear with me for a paragraph or two.

“True it is, without falsehood, certain and most true: That that which is above is like to that which is below & that which is below is like to that which is above..to accomplish the miracles of one thing”. This is the babble that this thing opens up with, recited by an old man who whistles at the end of every other word. From this point on he will be referred to as GHW (Geezer who whistles). These words are printed on some sort of paper that’s supposed to approximate the look of an ancient scroll but in all likelihood it’s just some bad photoshop work copied on a crappy inkjet printer. He continues to recite from the scroll: “And as all things were by the contemplation of one, so all things arose from this one thing by a single act of adaption.

The Father thereof is the Sun, the Mother the Moon, The Wind carried it in it’s womb, the Earth is the nurse thereof”. WTF?? Mind you, I haven’t seen any actors yet, just the monotonous whistle speak of this old man. If I haven’t seen anyone yet then how do I know he’s an old man, you ask? I know he’s an old man because he sounds like an old f*cking man & NOBODY whistles after pronouncing every other word coming out of their mouths except old people. That’s cuz’ they’ve got no f*cking teeth. I wanted to punch what few teeth this f*ck had in his mouth after 3 minutes of this tedium but he’s not finished. Oh no..he ain’t letting me off that easy. He continues to babble from this pseudo scroll for what seems to be an eternity. All of this finally leads us to a title sequence which states that this thing is a presentation of The Church Of The Hermetic Sciences & then we’re lead to what I guess is some sort of altar or something & we get the title: THE RITES OF MAGICK!! Oh my god. Oh sweet Jesus, what have I done to deserve this? After literally 5 minutes I’m ready to have someone fire a gun next to my head so I don’t have to hear it & have my eyes gouged out by a rabid Rhesus monkey so I don’t have to see it. I could just turn it off I suppose but I have a job to do & the blowing out of my ears & removal of my eyes sounds much more dramatic don’t you think?

The Writer/Producer/Narrator of this thing goes by the name of Poke Runyon, after his credit is displayed on the screen he whisks us away to a place he calls the “Headquarters of the Church Of The Hermetic Sciences” which is hidden away in a national forest somewhere in California. It is called Rivendell. We know this because there’s a big f*cking sign that says Rivendell hanging in front of the joint. Underneath the word Rivendell the sign says “Where Elves yet Dwell in Glades Beneath the Misty Fell”. Now I gotta hear about Elves too. That’s just dandy. I failed to mention that Poke is his name in the “Outer World” but in the “Inner World” of the Rivendell hermitage he’s known as “The Archimage Fraterdamion” or “Fried Eggs & Ham” or something like that, I couldn’t quite make out what the old man was yammering about. But the way his eyes bug out when he tells us this is one of the scariest f*cking things I’ve ever seen.. There is so much gobbledy gook coming out of the GHW’s mouth that I believe that between his babbling & his bugged out eyes that he’s trying to hypnotize us.

The thing is broken up into 6 chapters: “Hermetic Yoga”, “Pathworking”, “Seasonal Rites Of Magic” (which features some ersatz home video of a ritual & a Re-creation of a ritual that features the power of good magic calling out the power of bad. Bad move on the good guys part because all they have to fight with is a handful of straw & the bad guy has a scythe, with which he continually hacks away at the straw with but doesn’t cut any of it. This begs the question: Aren’t there any knife sharpeners in Rivendell?

After this horrendous display of bad acting & makeup & costume design & sound & scriptwriting we are treated to “Communion Of The Elements”, “Enochian Watchtowers” & “Alchemical Fantasies”. The GHW implores us at the beginning of this chapter to “Come along with us now on a fantastic journey as we enter the strange world of alchemical transformation” at which point we’re treated to the “Bonus Feature” of this thing. A short film called “Massa Confussa” directed by Eric Bossick. A greater gift no one has ever given to me! “Massa Confussa”? Really?

It deals with an alchemist who’s missing an eye & his attempts to get it replaced through Alchemy. No dialogue, just some guy in ok makeup wandering around the forest looking for the components he needs to create his new eye & the trouble he gets into when he realizes he should’ve left well enough alone. These five minutes are far more entertaining than the preceding eternity of babble & ritual re-enactments that I was forced to suffer through.

Don’t get me wrong, “Mass Confusion” (my title, not theirs) still sucked but it was better than what preceded it by far. The GHW returns at it’s finale to proclaim that he’d rather stick with Vi**gra (!) I thought he was the “Archenemy Fatermaicomicus” or something like that. What the f*ck does he need help to get his johnson hard for? Why can’t he just grab some straw & wave it around for awhile? F*cking cop out with a limp d*ck is what he is, not the “Archemitron Fratervitameatavegamin” or whatever it is he calls himself…

But he isn’t finished! He still has some crap to shill so we’re introduced to someone who talks about the other volumes of this crap that are available on DVD for purchase. I’m amazed & Truly dumbfounded that there are people who actually buy this crap & believe in it. The GHW looks & sounds like a dirty old man & the people who appear in this thing are (most likely) extremely lonely people who spend their Friday nights playing “Dungeons & Dragons” followed up by vigorous masturbation for the rest of the weekend. I cannot fathom even knowing these people without reporting them to the local authorities. As a matter of fact, I’m thinking about reporting my editor to the authorities, I mean surely this is some form of torture he’s saddled me with..isn’t it?

Here’s a surprise…ZERO SHROUDS for “The Rites Of Magick”! A complete & utter waste for everyone who is of sound mind & body. All others, help yourself. There’s a spot right next to the GHW in the loony bin for you I’m sure. As for The Black Saint..He’s done with this tripe & he has now left the building…