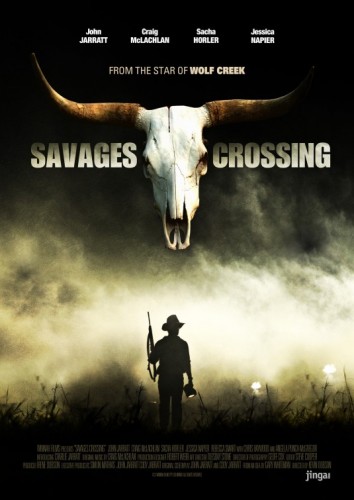 Torrential rain forces a group of strangers to take shelter in an outback roadhouse while a flood rages around them. But not everyone is who they first appear to be. The innocent among them quickly discover that the danger lurking within the roadhouse is far greater than the threat from outside. As the water levels rise, so does the tension but taking sides could prove deadly.

I know there isn’t a lack of good material out there, I just can’t figure out how they are slipping through the cracks and these films keep getting made. Some of them are very good, great ideas, killer cast, but those great ideas are never fully realized and the holes in the script keep it from being rising above mediocrity. “Savages Crossing” is an Aussie thriller with a great setup and an intriguing idea. Unfortunately, the script is just not all there. There wasn’t enough exposition and there is a back story that could have better served the rest of the film.

Phil (John Jarratt) is just out of jail and he isn’t going to waste any time. He likes to gamble and drink but that isn’t going to keep him from his wife, Sue (Angela Punch McGregor) and son Damien (Charlie Jarratt). They owe him and he plans on collecting. They go on the run when they find out he has been released. Sue has her own agenda when she decides she is going to pay police officer Chris (Chris Haywood) to kill him. What they weren’t counting on was the storm that is on its way in, causing a flood. Bridges are closed and they end up at an outback roadhouse that is run by Kate (Jessica Napier) and Mory (the awesome Craig McLachlan). The four of them play out their drama, dragging in a group of innocent bystanders whose lives are thrown into danger and the freak flood is keeping them all trapped.

“Savages Crossing” is a good film but it isn’t without problems. My main issue with the film is that there are too many unresolved issues or issues between Phil and his family that aren’t very clear. I liked that they mix things up a bit, you question who the real villain is at times. I just wish we would have known exactly how they ended up where they were. How bad was Phil anyways? What exactly did he do? They keep saying he is a psychopath but I was never really convinced of that. The best way to say it is that there were many holes in the story, intentional or not, if filled, would have served to make a better picture. 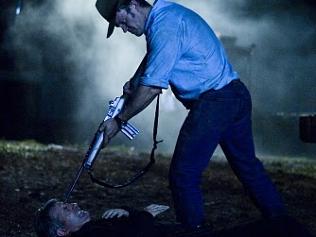 I loved the look of the film, the setting. The outback roadhouse had a unique look. To me it all just felt Australian and added to the overall tone. I like how the events unfold in the midst of a storm and though the budget was small, the roadhouse property was able to become a character itself. The cast was pretty incredible and there was a truly strong feeling of being an ensemble. Each character had a purpose and contributed something to how the events would end up playing out. Two standouts for me were Jessica Napier and Craig McLachlan. Jessica has a natural beauty and a charming demeanor that is very likable and engaging. Craig McLachlan just comes off as a reluctant badass. He doesn’t want to be in the situation he is but doesn’t take any crap from anyone. There is a story with his character that needs to be told and further adventures to be had. If not, someone needs to give this guy a starring role in some sort of action film.

“Savages Crossing” has some minor flaws in the script that could have been patched up with a bit of dialogue. The film is intriguing and the ensemble cast is absolutely terrific and worth watching for that reason alone. In a perfect world, this film could be used as a launching pad for a long career for many of its performers. There is some real talent involved and maybe, if anyone is listening, use it the same way Vin Diesel used “Pitch Black” to introduce a character and spin him off into his own film. Mory and Craig McLachlan deserve the same treatment. 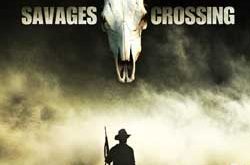