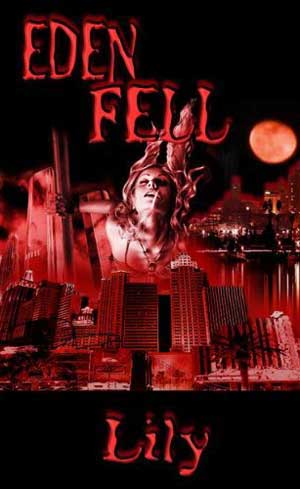 “Although my shrink is dubious and believes completely in my obliviousness, I am aware I’m always living in a perfect world in my mind. I know it’s not a perfect world. I know there aren’t such things as screaming snakes or weeping rhinoceroses, frost princes or winter sprites, or even unicorns in black leather. They aren’t real in this imperfect world we all must endure and the rainbow sparkles only once in childhood. But they’re real to me.”

Eden is an artist, beloved in her scene as well as among the club-bound sycophants, and the artist dream seems to surround her like bubble wrap. Her abstract work sells well, allowing her to live her life on her own terms without stooping to mundane levels of manual or even office labor and there is no shortage of guys clamoring to climb their way into her feral nethers. Life should be good, but it isn’t. She’s slipping down the long slide of drug abuse, depression, and personal dissolution. She’s losing lovers left and right, alienating her friends, followers and agent and her art career is tanking. Oh, and she is in a constant hallucinatory state, surrounded by zombies, snakes, rhinoceri, sprites, ad infinitum.

I’m sure, at this point, you’ve picked up on the fact that is not a horror novel, at least not horror of the “monster in the closet” variety. Instead, this could be looked at more as the Hubert Selby, Jr., life through the eyes of the lost type of horror. It is an introspective, inactive type of tale that will put many people off by the first page or so, locked inside the mind of the protagonist as it is. The writing style creates similar problems. Think slipstream, stream of consciousness, hallucinogenic prose that strives a bit too hard to come across as poetic without succeeding most of the time. Further, don’t expect anything resembling a traditional character or story arc.

Now, if you’ve made it this far without turning away in disgust, then there may be something here to interest you. Hell, congratulations just for making it past the incredibly overdone cover art that looks like a poster for “Attack of the 50 Foot Emotionally Ravaged Teen.” It honestly is not as bad as I just made it look; it just isn’t for everyone or even, in all probability, most people.

I can go two ways at this point: this is either an overblown bit of hideous post-teen angst-driven melodrama or an intriguingly complex and honest look into the self-absorbed, childish life of petulant and pampered artists in the traditional scenester sense. It is a bit of a strange experience spending so much time in the headspace of someone I, and in all probability the author, absolutely could not stand. Eden consistently comes across as a selfish, self-centered, self-indulgent, self-aggrandizing, egotistical hypocrite with a martyr complex. I get the feeling that Lily was going for a drugged up Holden Caufield in a modern context as written by William S. Burroughs.

Lily’s choice of a first person view helps to further cement Eden’s self-centered nature and the hallucinogenic qualities do well to highlight her fundamental separation from reality. She also does a good job of setting the stage for repeated opportunities to avoid the tragedies essential to the story, underlining the inherent flaws that will not allow Eden any real chance of redemption. At the same time, the lack of confidence lent a stilted feel to the flow of the prose and frankly, I could not sympathize with Eden at any point in the proceedings. Further, the symbolism throughout lacks the subtlety to truly work and, to spoil something that you would have to be half-brain dead not to see coming, the blatant nature of the title makes it come across as cheesy instead of haunting or provocative. And the last chapter struck me as unnecessary and even damaging to the effect of everything read prior to it, going a tad too far with the Jesus complex thing.