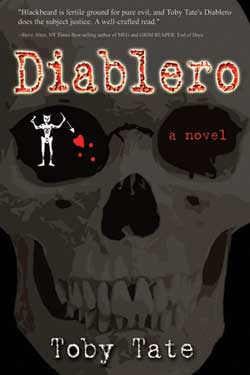 Available from Amazon.com and from your local independent book dealer.

Description: Diablero, Obeah, the Nightmare Walker…the demon had many names and had taken many souls before inhabiting the body of Edward Teach, the infamous Blackbeard the Pirate. But in 1718, Captain Robert Maynard killed Blackbeard and destroyed the demon, imprisoning it far below the shadowy depths of the Atlantic. Now someone has opened that prison…and Diablero walks again.

Review: At some point during childhood almost every little boy, or in my case little girl, fantasized about being a pirate. Pirates symbolized everything a child dreamed for; adventure, danger, the freedom to do whatever you wanted without an adult figure telling you no. For some the way the stories and movies romanced the pirates called to them. Those like me it was the occult legends the lured us in. For whatever reason you may have to like pirates you more than likely will be able to find it somewhere in the pages of Toby Tate’s Diablero.

During Saturdays airing of The Barret-Jackson Car Auction writer and explorer Clive Cussler said during an interview, “…Ships won’t be found until they want to be.” I didn’t have any paper or my laptop handy, so that may not be an exact quote. Those few words rang true for many explorers no matter what they are looking for. It also sums up how Diablero starts. From the start Diablero is written in a way that seemed more like one of the better made for SyFy channel movies rather than a book with its short scenes dealing with one group of characters before switching to scenes of another. Conversations are conveniently repeated by more than one group without any of the members being around during the last conversation. I would say it’s a cheap way to move the plot along, but it fits in with what’s going on.

If the detail that explains the reason for the repeats of conversation is thrown in as a last minute correction it is done in a way that does not seem like it. Much like the newest novel in a Young Adult Series I will not mention by name, Diablero has no chapters, but instead has skulls and crossed swords to put breaks into the story that I found very creative and in tune with the plot. These little scenes or Chapters, if they must be called, were sometimes only a couple pages long. The Chapters could have been a little longer without taking anything away from the plot, but I found it to be a bold choice by Mr. Tate by not doing what so many horror novels do. There also wasn’t much description placed into the novel. What description was in the novel was very memorable and may not have been if the whole book was filled with great description.

The characters are all different from each other and in true horror movie fashion some are stereotyped. Mr. Tate does not rely on covering up who is good and who is bad in the book. It was fairly easy to figure out sometimes even during the characters first appearance in the book what characters were on what side. Unlike your normal horror movie though it is all set up that way for a reason that benefits the plot. For example the character Lisa reminded me of Monet St. Croix from several of the Marvel Comics X-Titles. Lisa is described to be perfect in almost every way except for her personality. Due to events that happened prior to the book’s beginning she’s become very cold and basically a bitch. As the book plays out she learns to never forget what happened, but to forgive and realize that what happened effected other people too and just not herself. The plot of the book is just as much her journey of forgiveness as much as it is Blackbird’s journey to finish what was started several years ago. Blackbird is kept in the shadows for half the book as the demon worked his way towards completing his first goal, but once he stepped forward into the plot with the other characters he became more than just a horror novel monster. Blackbird contained just as much heart and soul as the protagonists and supporting characters did making him one of the more unforgettable characters from the novel.

If you’re looking for something new you won’t find it in Diablero. You will however find an enjoyable modern day take on Blackbeard’s tale.