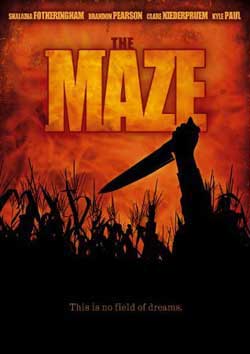 Five friends break into a closed corn maze in the middle of the night and decide to play a harmless game of tag. Little do they know that a psychopathic killer has decided to play along. As they wander aimlessly through the maze the murderer follows closely behind, taunting them and watching their every move. The game turns deadly when the kids decide to separate and weaken their chances of survival. When the mutilated body of the maze owner is found they realize that something is terribly wrong. As they race to find the entrance of the maze, the murderer cleverly forces them to follow the path that he wants. Manipulating everyone to his vicious will, the killer taunts his victims and leads them further into the depths of the maze. After succumbing to hours of torture will anyone make it out of the maze…alive?

I had heard a little bit about “The Maze” online over the last few months and thought that it sounded pretty damn cool. I am happy to report that I was not let down in the very least and it was a kick ass film. It had a nice 80’s slasher vibe to it and since I am a huge fan of those films I had a blast with this movie.

If you look it up on the Internet you will find mostly negative reviews for it, and I honestly for the life of me I don’t know why. I don’t understand why so many people felt the need to bash it the way that they did and it is nowhere near as bad as many people claim it is. I dug it myself and would go as far as to say that it is the best horror movie I’ve seen so far this year (and I have watched many even though we are just barely into 2011). Yes, it does have a few problems (the opening scene is a little confusing and is never really explained and some of the acting is less than Oscar worthy) but they didn’t stop me from fully enjoying the movie. To me it was a fun little slasher flick that had an interesting premise and some pretty decent death scenes.

One of the things that work for this movie is the setting. I have always thought that the idea of a killer stalking his victims in a corn maze would be a good idea, and “The Maze” pulls it off successfully. Having personally been through a corn maze myself I know how creepy and disorienting they can be if you get yourself turned around the wrong way and end up getting lost. Imagine being in such a situation with a killer lurking around trying to slaughter you and I think that it makes for a pretty tense experience. I know that I wouldn’t want to find myself in such a predicament. 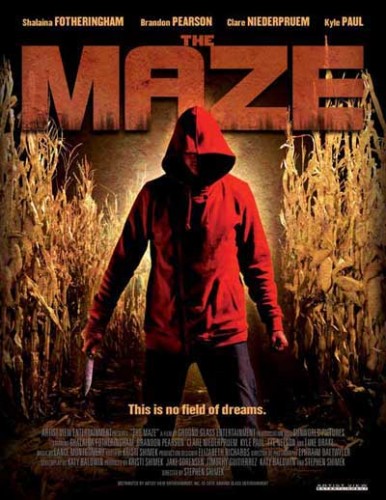 The characters are pretty likeable too. Jordan (played by Shalaina Castle-who looks like Justine Bateman) is good as the final girl and I liked Cole (Brandon Sean Pearson) though I do wish the filmmakers had gone into more detail about their relationship and why she’d dumped him. Allison and Will are a cute couple (I loved her “Velma from Scooby-Doo” scene-you’ll see what I’m talking about when you watch it), and Tye Nelson is pretty kick ass as Collin, the guy who provides some light comedy relief (the bit where he is trying to tell the story about the guy getting murdered is priceless). The character I liked most though, was the killer.

I don’t want to say much about him because I don’t want to give away the killer’s identity, but let me just say that he is a pretty hardcore guy. He has no back story (which I liked as it makes him creepier) and it seems that he just likes to hang out at the corn maze and kill people for no particular reason. There is just something about him that is unsettling (I loved how he would be walking around calmly and then would just take off running out of nowhere), and while he isn’t quite in the same league as Jason Voorhees or Michael Meyers he is still quite effective and chilling in his own way.

I also really liked the end as well. There is a nice twist toward the conclusion when we finally find out who the killer is and I for one thought it was a pretty cool idea. I thought that his identity was pretty original and it just works. Some people have complained about the ending and once again I am puzzled by this as I thought that it pretty much ruled. If you ask me the ending is one of the best parts of the movie and I saw absolutely nothing wrong with it. I really enjoyed “The Maze.” It was entertaining, had good characters, some cool death scenes (the decapitation scene being the highlight for me), and in my humble opinion a pretty creative and well-written ending. I was really into it and I think that a lot of other viewers will be too if they give it a chance. Check it out if you are a fan of slasher flicks (or even it you aren’t), I think that you will be glad that you did.