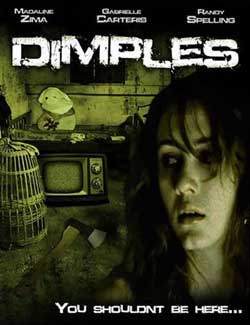 During a road trip, Frances (Madeline Zima) and her friends make an unexpected stop at an isolated house, where they discover a young girl is being tormented by a sinister man known only as the Doctor. Now, Frances and her pals must save the girl and disentangle themselves from the Doctor’s mad schemes before it’s too late. Dusty DePree directs this creepy fright-fest also starring Randy Spelling and Gabrielle Carteris.

I really get aggravated when a movie tries to be smarter than it really is. When it tries to deliver a big twist end that is supposed to shock, but all it really did was piss me off with how ridiculous it really was. “Dimples” was one of those movies.

There were some strong ideas and the title creature was cool looking but the script was such a mess that nothing worked. I will try not to use too many “spoilers”, but be warned, this review may give something away but I will try my best to refrain. I could just spoil the whole thing for you, that way you won’t waste any time watching this mess and you can thank me later.

“Dimples” opens when the police view a DVD with that title, what appears to be a murder and home invasion turns out to be Henry’s (Michael McMillian) attempt at making a horror film with Brittany (Ashley Peldon) which has yet to be completed. This leads us to Frances (Madeline Zima) a timid girl with a troubled past, her boyfriend Billy (Randy Spelling, yeah, THAT Randy Spelling), and Kim (Tasha Taylor). They are about to embark on a trip to the woods where there is supposed to be a huge party. They take off in their winnebago on the trip only to have encounters with a creepy guy at a gas station and Frances, who is the troubled lead, follows a young girl to a house of horrors where she lives with someone known as “the Doctor”. All this leads us to……

……a whole lot of nothing. I have talked to a couple of people who have seen this film and couldn’t believe how different it was. Well, I have news for them, this was not different, in fact, it felt amateur and uninspired. I felt nothing for the characters who were entirely one-dimensional and every attempt at making them more believable either felt forced, or fell flat due to lack of interest by the actors. Madeline Zima is a blast to watch on her Show time series “Californication”, but here she is dull, never finding the center of the character. It felt the same with the rest of the cast, that they were there only as A) a favor or B) a tiny paycheck. The only REAL acting in the film was that of former “Beverly Hills 90210” actress Gabrielle Carteris. She plays Frances’ adopted mother and her performance felt very natural and sincere.

The overall look of the film was messy. There were many scenes that were lit poorly or too much, some of the camera pans felt wobbly, and nothing felt inspired in its look. The films creature, never mentioned by name in the film but listed in the credits as, “Dimples” had a great look. There was one shot of him to lookout for near the end of the film that was genuinely unsettling. That’s what was so frustrating, the fact that there were things, ideas that were interesting, that were never fully developed or executed so poorly that could have led the film to a much more exciting conclusion.

The script was a mess, a failed attempt at messing with your head, with a ridiculous ending I saw coming ten minutes in to the film. I actually wrote in my notes that I would hate this movie if it ended a certain way. It ended that way and if anyone decides to watch this film, they will see it coming too. I have to say though, I will give credit where credit is

due, and this movie had a cool vomit scene, one of the few highlights. I love a slow burn, a movie that moves along at a horribly slow pace then at some point, later in the movie, goes in to overdrive and kicks your ass. I had hopes, at first, that maybe “Dimples” would shatter my assumptions and go in a direction that I hadn’t expected and blew me away. Well, I was wrong. All this movie did was frustrate me. I liked some of the actors, but they disappointed me.

I liked some of the ideas, but they were used the wrong way, the title creature looked great, but we hardly see him, when the characters start getting dispatched, the first death was great, but the rest were lackluster. Just like the film, a lackluster attempt at trying to mess with your head but only succeeded in testing my patience. If anything, I hope Gabrielle Carteris gets a little notice for being in this, she really was good. To bad this sloppy mess of a movie is better left on the shelf somewhere, but if you do decide to take your chances, don’t blame me, I warned you.