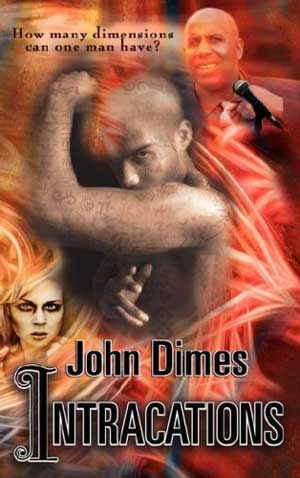 “Angels are antibodies. Prayer is telepathy. A phrase that was inextricably linked with the Androgyne’s kind and their creations. Their very existence was, arguably, to be symbolic of God’s enduring presence in the absence of his presence. As protectors of the universal harmony. What a joke that had become, in light of all the petty intrigues concocted by its people against the whole of the worlds.”

Toni Morrison is famous for saying that the biggest insult she could receive would be to see one of her books on someone’s nightstand, since her writing was too rich, too powerful and too intelligent for simple bedtime reading. I don’t think John Dimes is that arrogant, but I certainly have a hard time imagining Intracations would suffer from that fate. In simple terms, the only word I can think of to describe this book, or more specifically, the experience of reading it, is frustrating. Kind of like that last sentence.

Hiram is an average guy, for the most part. A journeyman standup comedian who sees his job as nothing grander than that and who likes to get himself a little bit of ass whenever possible. But he’s started changing recently. A light-skinned man whose skin’s been getting darker. He’s been seeing things. And then there are the glowing bastards that attacked him out of nowhere and the heavily tattooed mute version of himself that came swooping in to his aid.

At least that is what I think this story is about. Maybe you should throw in something about the possible end of the world and some New Age permutations on Christianity. And a bit on doppelgangers. I’m not entirely sure.

And that is precisely where the biggest problem with this book lies, I had a pain in the ass trying to make sense out of what was happening.

It’s a shame too, because I can see some serious potential here. John obviously has a vision behind this tale. A vision with scope and balls. There is a sense of wonder and originality mixed in with everything. I swear that there has to be a good story hidden somewhere in all of this, but it is WELL hidden.

Part of this problem has to do with the overall style. Dimes flits back and forth between characters, across dimensions and in and out of hallucinations with no attempt at warning or clarification. Initially, I thought he was ingeniously creating a sense of confusion in the reader to mirror that of the protagonist as he experiences things far beyond his ability to comprehend. Unfortunately, this approach continues even as Hiram is shuffled off to the side in favor of several characters who, as far as I could tell, were supposed to be much more experienced in these matters.

Don’t get me wrong, I’m all for a complex, challenging story. Peter Straub’s Mr. X and Clive Barker’s Everville are among my favorite books and they practically drove me out of my mind while I was reading them. But I prefer my complexity to lie in rich, layered characterization and themes that do not allow for any short, easy way out. I’m perfectly cool with complex language as well. However, the story itself or at least the ideas behind it have to be intriguing enough for me to put up with the other bull.

In all honesty, if John had not been kind enough to send me a free (and autographed, even) copy of the book for review purposes, I would not have continued past the half way point. I spent a weekend doing anything possible to avoid reading the last ten pages because I was that sick of it. With that in mind, I can’t recommend it.