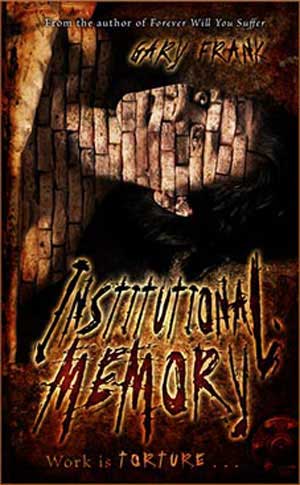 Work is torture. We all say it and to a certain, albeit hyperbolic, degree we mean what we say. Day in- day out, clock in-clock out, stumbling into a cubicle or in front of a machine or, horror of horrors, behind a counter as our life leaks away bit by bit. Isn’t it strange that even low impact jobs leave us feeling completely drained by the end of the day? Eight hours of typing at a computer shouldn’t wear anyone out that much. With Institutional Memory, Gary Frank has taken that bit of everyday horror and twisted it into an interesting permutation of the traditional haunted building story.

Like all major gathering places, the Howard Phillips (gotta love Lovecraft references, it’s in the Union bylaws) building is possessed by an other-dimensional being who has been slowly leeching off the lifeforce of the people who work within it. That in itself is nothing new or particularly horrible, until this entity begins to take a turn for the abnormal. Maybe it’s sick or maybe the recent loss of so many of the businesses that used to inhabit the building have driven it to desperate means of obtaining sustenance but this particular being has recently taken up a more active form of feeding. Somehow, it has found out that fear is damn tasty and that we peoples get afeared real easy if you poke with something sharp enough times. That whole “work is torture” thing is about to take on a whole new meaning for the employees within, MUWAHAHAHAHAHAHAHA!

Gary makes it pretty clear right from the start that he isn’t aiming for high art here, but has his sights set on f*cking up a few people and making you as scared to go in to work as you probably should be already. While I wouldn’t place him among the Hardcore elite of Ed Lee or Dick Laymon, he certainly does not skimp on the wet n goopy slimy loopies of tasty tasty entrails. There are a couple of especially effective deaths that involve both broken and healing glass and something that will have you thinking twice before taking the stairs.

What surprised me was how well he drew me into the lives of some of his characters. Of specific note are Marcy Browne and Jon Simon. Marcy is an empty shell, a ghost of a person who hides whenever possible and is much more worried about the opinions of others than is healthy. We all know the type until we see her roots in an abyss of guilt and self-reproach stemming from the disappearance of her sister. Jon is the expected author (they do always say to write what you know) in the midst of a failing marriage whose wife is unreasonably forcing him back to work. Character summaries do no justice the way that their lives are laid bare before our eyes as H.P. feeds and, sure, they may not be particularly layered or complex, but damn if they didn’t feel like real people to me.

Another incredibly strong point is the dialog, both interior and exterior. Natural and unaffected, these characters also talk like real people without coming across as self-consciously witty or stilted. I particularly remember screaming along in my head to the growing intensity of Jon’s inner turmoil when he discovers his wife’s infidelity (if that is a spoiler, then you are an idiot for not seeing it coming): “You know what Alyssa, sorry works for broken dishes. Sorry works for not doing something I asked you to do. Sorry even works if you spent too much time somewhere and weren’t home when you said you’d be home and I worried about you. Though at this point I don’t know why I’d give a sh*t. But. Sorry. Does. Not. Work. For. Fucking. Blow. Jobs.” Hell yeah.

However, not everything is flowers of flesh and blood in this garden. Gary’s relative inexperience (this is his second published novel) shows through in some narrative gaps and a bit of plain old sloppy writing. Of particular frustration to me is a couple of pages that are wasted on an obnoxious and clumsy attempt at winking at the audience via a character’s “It’s not like we’re in a horror movie” rant that isn’t funny, ironic or witty, just lame. That is one of the few moments that he has people saying things that people do not actually say in real life and it is made all the more aggravating by the fact that he gets exactly what he is trying too hard to do here perfect just 50 pages later. But the worst offense is super-exposition lady. Whenever you have a plot point that you need explained that the characters have no reason to know on their own, super exposition lady is there. Seriously, there had to be a better way to do it than that. Lucky for me, these flubbles do no major harm to the tale as a whole.

At the end of the day, Mr. Frank pulls off exactly what I think he wanted: a fun, engrossing popcorn flick of a story with a little more depth than I expected and plenty of salsa. If he focuses on his strengths and edits a bit more tightly then he could be a f*cking bulldozer but as it stands he blows the hell out of everything John Saul has ever written and a good chunk of Koontz.