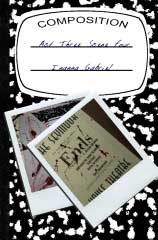 “The Blow landed on Finch’s chest but it didn’t slide through the flesh like Brandon had expected… Brandon lifted the heavy tool back up and inspected it. The head was heavy and solid, but the blade was dull to the extent that it was flattened. He c**ked his head to one side then the other trying to figure out this strange flaw. He ran a finger along the edge, fascinated that it wasn’t cutting him.”

If anyone had thought to ask me if I was interested in reading a psychopathic serial killer novel, I would’ve answered with a bland, empty shrug in place of a no. Yes, I know that man is the real monster and all of that, but still like to see some more literal monsters among my literary carnage. Then, as usual, I get one in the mail and find myself quite enthralled. It’s amazing what a well written story can do to a cliché.

Madison, as an act of charity, set Kyle up to read for a part in a movie that he is in no way qualified for, so imagine her surprise when he actually gets it. Now, much to the consternation and horror of the other cast and directors he is bumbling his way through his lines while periodically destroying props and setting sets on fire. When he suddenly, inexplicably improves, everyone is thrilled. Until his obsession over perfecting the film’s pivotal scene (care to guess which act and scene it is?) bleeds beyond the page and the stage.

What stood out the most for me here was the patience Ms. Gabriel shows in building and revealing the characters that make up this tale. Impetuous readers will notice that not much action occurs for the first hundred and twenty or so pages but I appreciated the classical approach she took, as it allowed me to get comfortable in this world and with the characters she created before they started getting chopped into little bits. In point of fact, I could not see this particular story working without such a methodical pace since, while nominally about a serial killer, this is really about the relationships people build and destroy. It is Kyle’s inability to empathize, and thereby form a meaningful relationship, with anyone outside of his own head that eventually leads him around the bend. She also shows the same level of patience while building narrative tension, allowing us glimpses of the slow unraveling of Kyle’s mental state as it builds to a crescendo as Kyle finally tips over into the dark and bloody side. The moment of that conversion is one of those rare, truly chilling moments and owes its impact to this patience. It’s refreshing, in a time where you are constantly told to make your stories snappier and to keep the pace as frenetic as possible, to be presented with such a measured and calm method of storytelling.

That said, I have to nitpick a little bit. Inanna’s writing style feels very clunky during the first quarter, with the words tripping over themselves rather than flowing into each other, though it does eventually fall into a very comfortable groove. Also, the overuse of the title, referring to act three, scene four repeatedly in dialog even though every other scene is referred to by its defining action (i.e. Mr. Finch’s death scene, Brandon and Mary’s love scene, etc.), is a tad grating. This next thing may seem a bit petty, but it pulled me out of the story too often for comfort: The names were distracting. Unusual names like Wren, Balthazar (who goes by Bal), Kyla (goes by Ky) and Madison regularly being referred to as Madi are not necessarily a bad thing but so many among so few characters drew my attention to the artifice of story creation instead of lulling me into the world of the story. Finally, the very last section didn’t really need to be there and I felt a little insulted that Inanna believed the reader would need the underpinnings of the character explained to that extent.

When the last clacker has clacked and the filming is done, the classical structure and patience building both character and suspense made for an enjoyable and surprising read.