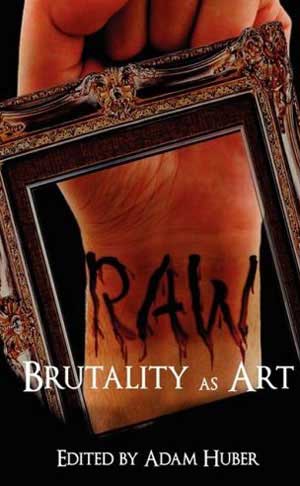 What do you call a man with no arms and no legs hanging on a wall? If you said “Art”, then, congratulations, you’re certainly up on your elementary school humor. What do you call an anthology based around the deformation and destruction of the human animal in the name of the holy grail of transgressive art? If the answer isn’t “Raw,” than this has made for a damn crappy intro for a review.

The title, theme and fairly blunt cover art are vague enough to intrigue: Is it a splatterpunk-esque exploration of the beauty of agony and spilled entrails? Maybe a Hardcore attack of in-your-face human ugliness? Or more cheap tales of the exploits of yet another serial killer? What we end up with is a bit of all of that and some pleasantly unpleasant surprises as well.

The collection kicks off on a hell of a foot with Inanna Gabriel’s “Violin Concerto No. 9 in A Minor”, what should very well be a standard tale of obsession and murder that takes a turn into the sublime thanks to Inanna’s ability to narrate through music. “The City of Dancing Lights” shows Frank Roger to not only possess a deft wit, but is positively seething with hatred of pompous artists and their innate separation from the world they exist in and comment on. Kevin Lucia holds up my already high opinion of his work with another Serling-inspired morality play on exactly what being a class-A asshole can get you in “A Willing Donor”. John Edward Lawson gives us an intriguing little tale of unlikely love and unwilling sacrifice via “Cry Little Sister”. The point is that there is some serious talent presented here in stories that display as much of the authors heart as the other internal organs of some of the less fortunate characters.

Particularly heavy attention should be paid to the contributions author Steven Shrewsbury. L.L. Soares and Stephen Couch. “Pretty Face on Genocide” (Shrewsbury) weaves a tale of selfishness, obsession, vengeance, redemption, history and hero(villain)-worship that is about as powerful as anything you could ask for in a story within a story that may very well be a bout an entirely different story. “Still Life with Soul Juice” had the misfortune of my brain refusing to cease connecting it with the Robbins novel but managed to transcend that with an exploration of what exactly it is that art too often demands of the artist awash in in blood and brain matter. Finally, “Squeezing out Sparks” (Couch) is heart-felt and bleeding, oozing with regret and loss that is skillfully turned into a weapon against one of those artists that Frank Roger seems to hate so much.

As usual, there are some dandelions among this field of flowers of flesh and blood. “Onyx Noir” by Jessica Lynne Gardner isn’t particularly bad, per se, but as either a tale of modern Gothic horror or as a wry comment on the silly preoccupations of that culture, it doesn’t really work. Trever palmer, with :”You Come When I Call,” seems to be trying too hard to come across as early Ed Lee without the brazen balls or wild imagination and ends up with a story that has no story to it. The worst offender here was Brandon Ford’s “Painted in Red,” which started well with honest feelings of self-centered envy (we’ve all been caught hatin’ sometime) that rang true in their expression but ended in a way that managed to come across as both amazingly cheesy and obnoxiously condescending. I was actually a bit offended, and not in the good way.

All in all, Raw is a solid anthology, especially for a first publication that started off with a general open admissions call. I’ll be looking forward to seeing what they will have to show us n the future.