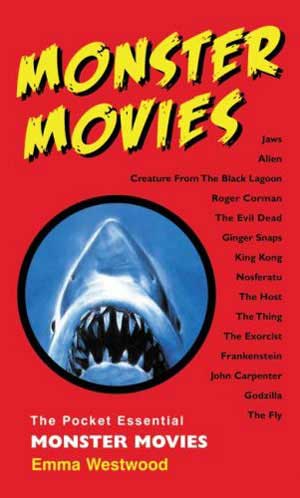 Another engaging release from the pocket film books over at “Pocket Essentials”. Monster Movies by Emma Westwood is a short and sweet overview of a whole lotta monster based films. An obvious fan of the genre, Emma has compiled a sort of collective effort of noted monster films from past to present. What I mean Author that is, we get a range of Godzilla, 28 Days later, Jaws, Frankenstein, the Blob, Cat People and even the Killer Shrews.

The book while quick and to the point gives pretty short overviews on each film. A few are more extended out of interest of more information to cover. None-the-less, there are quite a history of monster films to cover and Emma does a pretty good job over the course of 192 pages.

I found this better as a flip through than as a sit down and read cover to cover kind of book. In fact most of Pocket Essentials are like that but in this case with so many titles to choose from its best just to use it as a “what was that film about?” book.

To break up the flow a bit, she has also provided a few interesting interviews. Ones with the likes of Roger Croman, Larry Cohen, Bog-Joon-ho and John Carpenter to name a few.

Emma includes with each entry “physicality” with “lineage and legacy”. It sort of gives another dimension or approach to the entries which can range from informative to humorous. Most of the entries serve as review points. In other words, its a review book with a few added bonuses along the way. I was happy though to read that her perspective was from the perspective of a horror fan rather that “just” a writer. Those cases can take the flavor intended out of reviews where the writer focuses more on over analysis than the intended entertainment value.

The unique approach I found in this book is the jump from time frame to time frame. We go from “Rogue” (2007) right into “Eraser head” and “Freaks”. So it does make a fair attempt to cover alot of ground. My opinion on the collection is its obviously not complete. It is more of a sample book. A much bolder attempt would span much more content and would list every Godzilla film, every King Kong film, every killer shark film….. well you get the point.

But none of these short reads really aspire to that plateau with a limited page count. They are purely for your back pocket as you stand in line at the DMV waiting to get your licence renewed. And on that note, I will most likely do the same in a future opportunity. What better opportunity to catch up on a few facts about the “50 foot woman” or some Dog Soldiers?

Its’ a cute little book and a good travel friend to take along, not much more I could say beyond that. For more similar reads and like presentations check out Pocket Essentials library of offerings.