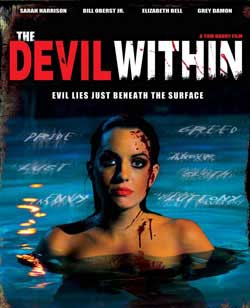 SYNOPSIS:
Sirena decides to celebrate her eighteenth birthday by having her friends over at her place for a pool party. Everything goes great and everyone is having a wonderful time until a knife-welding killer decides to crash the party and starts butchering the guests. Is the killer just some random psycho or is it someone that Sirena knows?

REVIEW:
Being a huge slasher fan I couldn’t wait to check out “The Devil Within” after I found out what it was about. It sounded like it would be right up my alley as from what I had read about it sounded like it was a kick ass, throw back to the 80’s slasher films. I popped it into my DVD player expecting it to rock…but I was very wrong. Instead of being treated to a fun slasher flick with some cool death scenes and awesome gore I got a pretty boring movie with lame death scenes, unbelievably annoying characters, and a serious lack of blood and guts.

One of the biggest issues I had with this film was the fact that it was just plain boring. There was just way too much screwing around and nothing of importance happens pretty much the entire first hour (except for a pointless opening scene where some nameless hooker is killed that is never mentioned again). We have to suffer through the characters hanging out, getting tattoos, making fun of each other, going to class, etc before the killer gets to work. In short the first half of the movie is just boring filler and I had to resist the urge to skip ahead to the next scene several times.

“The Devil Within (not really sure why the people behind it called it that, by the way)” also suffers from a lack of likable characters. Most of them are horribly bad and just annoying in general. I had a difficult time liking any of them other than the troubled (and hot!) goth chick (Sarah Kathryn Harrison) and the mentally handicapped sister. Other than those two I didn’t really care about any of the others and really wasn’t that broken up when they were killed off. I found Sirena to be irritating, her boyfriend to be an asshole and the guy that looked like Spencer Pratt who kept walking around saying “Dude! Look at the sh*tter on that critter!” was one of the most obnoxious characters I’ve seen in a movie in a very long time. He should have been killed off about three minutes into it but for some reason he is still around toward the end. When he finally did buy it I wanted to stand up and cheer just because it meant I didn’t have to listen to him carry on anymore.

It was also painfully easy to figure out who the killer was. It was supposed to be a mystery as to who it was but there is a key scene pretty early on that gives it all away (seriously, you would have to be blind not to see it). The filmmakers try too hard to make you think that it is someone else and I for one thought that the identity of the killer was pretty obvious. I guarantee that most viewers will have little to no trouble figuring out who the killer is before it is revealed.

Really the only positive thing I can say about this movie is that there is a lot of female nudity. I think that the filmmakers knew that it wasn’t going to be a very good flick about halfway into filming it and were like “Hey! Let’s just have most of the female cast members get topless so it will distract people from the fact that our movie is less than awesome!”

“The Devil Within” could have been a really great movie. It had all the elements to make it rule but it just didn’t quite happen for a number or reasons. It reminded me of the film “Bloody Murder” a little at times and I don’t think that anyone will be calling it a slasher classic in fifty or sixty years. I went into it with high hopes but it just didn’t deliver. I knew within just a few minutes that I was going to be disappointed in it and I was right. I suggest that if you do want to check it out that you go into it with pretty low expectations so you aren’t left feeling let down like I was.

Tags The Devil Within 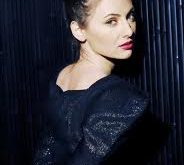