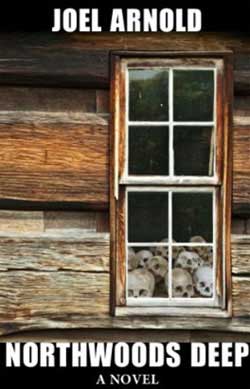 Take a ride over the river and through the woods straight into terror with horror and suspense author Joel Arnold’s latest novel, Northwoods Deep.

When five children and their adult chaperone set off on a hike along the Mesaba River, all vanish without a trace except for one, too traumatized to speak. Local Ojibwe claim the Maymaygwayshi – mischievous spirits who live in the rocks along the river – stole the children.

Six years later, Carol and Brenda Gunderson embark on a canoe trip on the same river. When their canoe capsizes, they discover a cabin in the woods occupied by an old man hiding a terrible secret.

Augustus Meyer has become complacent as the guardian of an ancient evil that resides below his cabin. In a cavern piled high with the bones of its victims, it feeds off the souls of the living and rewards Meyer with mind-blowing hallucinations.

Carol’s ex-husband Mitch has been secretly following her, and will stop at nothing to possess her once again. Their brother Jack searches for them while battling his own demons. Allen Gunderson reluctantly accompanies his son in an attempt to stop the remnants of his family from falling apart.

All of them merge in the deep north woods at Meyer’s cabin, brought together by a calculating evil whose hunger grows as it seeks out a new guardian.

Joel Arnold’s writing has appeared in over sixty publications, with work accepted by venues such as Weird Tales, Cemetery Dance, and Chizine. Many of his short stories are available as free podcasts at Pseudopod.org. Three of his short story collections, as well as his debut novel, Death Rhythm, are also available as e-books. In 2010, he was the recipient of a MN Artist Initiative Grant.

Northwoods Deep can be found on Amazon here:
www.amazon.com/dp/B003UHVXCE

As well as Smashwords:
www.smashwords.com/books/view/18433