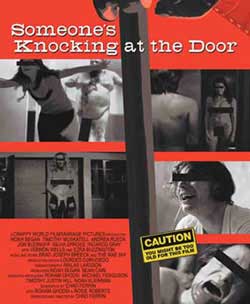 Returning to the medical school where they were test subjects decades ago, a pair of outrageously twisted serial killers use shockingly brutal sex acts to start killing off a group of drugged-out med students. Now, the students must find a way out of their trippy hallucinations to defend themselves against the maniacs.

College is a difficult new lifestyle young adults must endure when going for their degree to use for their future career. One of the most difficult degrees of study is the ones in which many years of Medical School must be upheld. Dealing with the stress of long hours of studying, students will explore different outlets to get their minds of life’s hassles, such as excessive drinking and drug use. The dangers of using an experimental drug hit a small group of students, which leads to their extraordinary demise in Chad Ferrin’s Someone’s Knocking at the Door.

The movie kicks off with Ray (Jordan Lawson) shooting up after a long stressful day of school. He hears someone knocking at the door (hence the movie title), and he opens the door complaining that his buzz will be killed. A beautiful, naked woman is standing in his doorway, and quickly seduces Ray. She is instantly transformed into an old, dirty male that rapes him with his incredibly large sexual organ.

News of the murder is quickly spread around Linda Vista Community Hospital, where a group of Ray’s friends are gathered outside. Joe (Ricardo Grey), Annie(Silvia Spross), Meg(Andrea Rueda), and Sebastian(Jon Budinoff) are all shocked to hear of Ray’s death. The only friend missing, Justin (Noah Segan), is back in his dorm room having dreams of Ray on the operating table trying to communicate to him. Justin is alarmed by the death, and goes to a campus party to try to talk to his comrades about his dreams. He finds Joe trying to get some from a passed out partygoer, and finally finds a fairly sober Annie to talk to.

The next day, the group goes to Ray’s funeral. They get hassled by Ray’s mother (Mary Rings), who blames Ray’s ex Meg and rest of the group for his untimely demise. After defending themselves, two detectives that just so happen to be at the funeral, take the students down to the station for some brutal cross examination. The detectives are able to get few facts out of the students, but get the most out of a flashback of Justin’s where the group gets high off the drug “Teldon” and researches the 1973 case of John and Wilma Hopper. They listen to the hypnotic treatment gone wrong; where the nymphomaniac serial killers get possessed by their sex craved alter egos and kill the psychologist and nurse.

The drug trip that was this movie was confusing to piece together, as some parts were dreams and others was reality. The kill scenes were definitely creative and sexually provocative, having serial killers exclaiming, “I’m gonna f*ck you til you die!” The movie doesn’t hold back with plenty of full frontal female and male nudity, with lots of blood and sex. The music of the movie also blew my mind, with a great mix of rock/techno/indie songs that kept the move up to speed. The only part that bothered me was the scene cuts, which were jumpy and confusing but could be interpreted as feeling as if you are on a drug trip while watching the movie.

Chad Ferrin’s Someone’s Knocking at the Door is a psychedelic tale taking place in the 21st century involving college medical student’s use of experimental drugs. Even though college can be stressful enough to try to relax at any means necessary, students must be careful in which outlet they choose to relax through. Failure to do so can lead to overdose, addiction, and eventually even death through dangerous hallucinations.

Tags Someone's Knocking at the Door