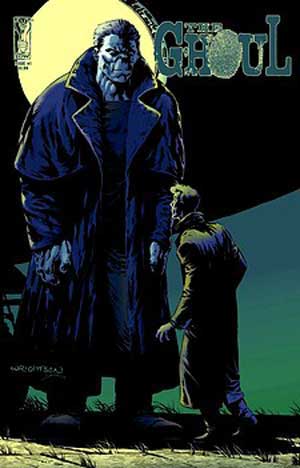 “When Los Angeles Detective Lieutenant Lloyd Klimpt finds himself in the middle of a Hollywood mystery that falls way outside the norm, he knows he’s going to need a different kind of help than he’s used to. He finds it in the bizarre form of The Ghoul, a monstrous investigator with a reputation for solving the world’s weirdest crimes. Written and created by Steve Niles (30 Days of Night), with art by industry legend Bernie Wrightson.“

Artwork: 3.5 out of 5
I have always been a big fan of Bernie Wrightson and I did enjoy the overall look of this issue. However, I found at times the inks to be to overpowering to where the whole panel seemed too dark. Now I get the feel for the noir/monster story, but I just found it to be a bit too much. The coloring was great as it gave off that needed vibe to set the story. So overall it worked but there were some instances where I was put off.

Story: 3.0 out of 5
The story on this issue seemed to stall a bit. Sure I get the idea that you don’t want to give too much away, but I didn’t feel enough was presented. The case that our two characters are working on is presented nicely, but everything else just wasn’t defined the way I thought it should have been for a first issue. Even the cliffhanger style ending seemed strange as it didn’t seem to fit with the rest of the story. I am intrigued enough to continue on but I hope some more build up can be brought to the table.

Dying Breath: 3.0 out of 5
I liked the artowork but it wasn’t enough to overcome what I saw as holes in the story. The issue seemed short, as you get a backup story that ends up taking more pages that could have been used for more of the comic. But that’s just how I feel. I think getting Niles and Wrightson on the same book can easily make it a winner, I just want to get more from it with issue #2.

If you would like to know more about The Ghoul you can go to www.idwpublishing.com/