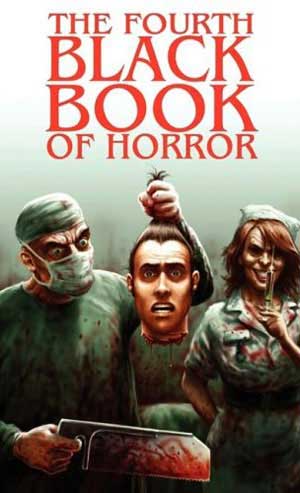 “People Who liked horror were f*ckwits. He’d lived with horror all his life. Real Horror. Well, tonight he’d spread it around.”

In the interest of total honesty and with full respect to the fine people at Mortbury Press, I had no interest whatsoever in reading this book when I started in on it. To begin with, I was feeling a tad worn out on anthologies. Normally, I love them, but I’ve been inundated with them recently and I wasn’t allowing myself to take some occasional time out to read something because I wanted too, not because a review copy had been sent to me (note to self- this was a very bad idea and incredibly unfair to the companies who have been kind enough to send me free books. Don’t let it happen again.). Further, both the title and cover art are extremely uninspired and uninspiring. They might as well have had a plain black cover with “Generic Horror Anthology” written on it. But I pushed all of that bullsh*t aside and slowly waded in because they sent me a free copy and, at the least, I owed them an honest and unbiased review.

Then I started reading the first story, “Soup”, by Craig Herbertson and it presented further problems for me. I like to say that I am by no stretch of the imagination a racist or nationalist, but this story was coming across as waaay to damn British (hell, I could only find the price listed in pounds). And I don’t mean Python at their best or Douglas Adams British, I mean Dickens at his worst British. I am someone who gets off on raw, bare and scraped EMOTION in my stories. I can let a whole mess of technical foul-ups and plot holes the size of the Serengeti slide as long as I am feeling what the author was feeling when they wrote it. Unfortunately, Herbertson opted for a stiff-upper-lip, cold and clinical, detached approach that seemed to put plot before character and that made it incredibly hard to get into.

Unfortunately, as I got further along in the anthology, I found that this was by no means and isolated issue. In fact, it was like a plague running through damn near the whole thing. As an example, let me give you a taste of Daniel McGachey’s “And Still Those Screams Resound…”:

“When the hour came for the apparition to commence, we were already ensconced in that bleak turret cell and, as Shadwell had predicted, the shrieking began on cue. There, again, that unnatural ring of glimmering light. There, again, was that white form that convulsed into being before us. There, again, was the horror in her eyes, when those eyes had finally formed. This time, on Shadwell’s urging, I noted the dress.” (from page 127)

Certainly not bad writing, but entirely lacking in the heart, soul or humanity that I need for any of the horror to become real for me.

That said, there were some shining lights glimmering in the pale emptiness. Specifically, “All Hallow’s Even”, by Franklin Marsh, was a marvelously maliciously fun romp with just the right combination of gags and giggles. Also, Greg McMahon set my head to spinning with his surreal and intriguing look at modern love life with “Love is in the Air” and “A Cry for Help” (Joel Lane) makes for a great attack on what is referred to as “the American model” of health care. But Johnny Mains completely kicked my ass with “With Deepest Sympathy”. The second you find out what is going on, I guarantee you’ll be on the floor.

Personally, I have a hard time recommending a book running you roughly $20 that has about 33 pages worth of stories that I actually enjoyed. Of course, if you are someone that enjoys Lovecraft for his writing style, then you will completely disagree with me.