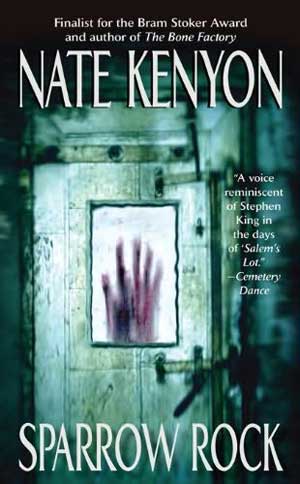 In a short period of time, Nate Kenyon has quickly become one of the most respected writers in the field of horror fiction today. What makes Kenyon’s novels stand out from the horror fiction pack is his writing style. His characters are always well developed, plot lines are tight and his books are written in the style of classic fiction. Most importantly, his stories are never predictable.

With SPARROW ROCK, his latest effort for the popular Leisure Horror series, Nate Kenyon has produced another well-written tale packed with suspense and surprises. Preying upon the modern fears of terrorism and end-of-the-world scenarios, this novel takes place within a modern-day bomb shelter. A group of High School friends enter the bomb shelter that one of their grand-father’s had built on their property. Their search for a place to hang out and kill some time ironically turns into the only safe haven in their world as a nuclear holocaust apparently has wiped out all living beings while they are sheltered beneath the ground.

The High School friends represent the standard stereotypes of modern-day teens: Dan – the unofficial leader and typical jock; Sue – the outspoken, ‘tough’ girl; Pete – the average guy trying too hard to fit in; Tessa – Pete’s sister; Jimmie – the slacker and Jay – the smart kid who is full of conspiracy theories. The entire group begins to pay more attention to Jay as some of his wild conspiracy theories about terrorism and plans for global domination appear to have come true. What is even more horrifying is what comes next.

Even though they are stuck down in the bomb shelter and afraid to go outside for fear of contamination from nuclear fallout, this does not prevent everything from getting in. Jimmie begins acting strangely after injuring himself and starts to hear voices in his head and random noises. Upon examination of his wounds, the group realizes the infection he is suffering from is not just a result of his injuries. It turns out that very small, ant-like creatures have entered into the wounds on his body and have begun colonizing his body. One of Jay’s theories centered on the creation of intelligent, foreign life-forms that could infiltrate any enemy. Could Jimmie be the victim of just such a scheme and does this have anything to do with the nuclear devastation that has occurred?

Nate Kenyon deftly builds the tension as these ‘smart’ bugs slowly pick off the members of the bomb shelter group one by one. There are many other works that come to mind when reading SPARROW ROCK, most prominent are THE RUINS by Scott Smith and INVASION OF THE BODY SNATCHERS by Jack Finney. The end-of-the-world bomb shelter bit also called to mind the classic Twilight Zone episode — “Time Enough At Last” by Rod Serling.

What sets this novel apart from other post-apocalyptic work is the clever ending that includes a twist I guarantee most readers will not see coming (and may even result in causing the reader to flip back and re-read prior sections of the novel). Kenyon has another winner with SPARROW ROCK — an intelligent and highly suspenseful horror novel that never lets up and will give the reader something to think about along the way.