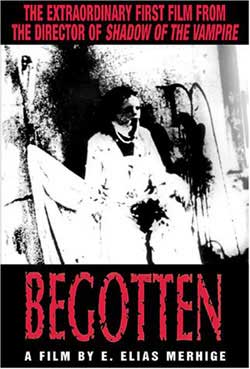 God disembowels himself with a straight razor. The spirit-like Mother Earth emerges, venturing into a bleak, barren landscape. Twitching and cowering, the Son Of Earth is set upon by faceless cannibals.

Begotten is hard to consume on many levels. Though in that consumption is also a smattering of brilliance.

The film uses a technique that disperses of grayscale values in favor of pure blacks and whites, more specifically called reversal film. This experimental project was created in 1990 by E. Elias Merhige that focuses on horror, extremes and bizarre visuals that leave room for interpretation. While it’s impossible to know exactly what all the scenes really mean, the director has shed some light which also doesn’t make the descriptions that much more consumable.

The plot is detailed as such:

The film opens with a robed, profusely bleeding “God” disemboweling himself, with the act ultimately ending in his death. A woman…. Mother Earth, emerges from his remains, arouses the body, and impregnates herself with his semen. Becoming pregnant, she wanders off into a vast and barren landscape. The pregnancy manifests in a fully grown convulsing man whom she leaves to his own devices.

The “Son of Earth” meets a group of faceless nomads who seize him with what is either a very long umbilical cord or a rope. The Son of Earth vomits organic pieces, and the nomads excitedly accept these as gifts. The nomads finally bring the man to a fire and burn him.

“Mother Earth” encounters the resurrected man and comforts him. She seizes the man with a similar umbilical cord. The nomads appear and proceed to rape her. Son of Earth is left to mourn over the lifeless body. A group of characters appears, carry her off and dismember her, later returning for Son of Earth. After he, too, is dismembered, the group buries the remains, planting the parts into the crust of the earth. The burial site becomes lush with flowers. In a final coda, “Mother Earth” and “Son of Earth” are shown again, this time wandering away through a forest.

Begotten is unnerving in several ways, one of which is the content which would have been more brutal if in full color. Though with the stark contrast, many scenes are lost in ambiguity making it hard to know what your looking at. This approach is also the artistic merit that gives this film a special viewing experience. In one scene the recently created mother earth proceeds to rub the semen of the deceased god into her vagina. Though as a contrasted event it takes awhile to recognize the visual aspect. Shadows become more pronounced, sometimes taking the lead focal point over the things casting them. Water reflections appear nightmarishly distorted like claws and disfigured monsters at times.

The film lacks dialog but is not silent. Well placed noises, drones and sounds add to the eeriness of the piece. Begotten is chock full of symbolism that points to Egyptian myths and Christianity. Though any Christian would be hard pressed to approve of such blasphemous interpretations. It’s opener scene provides a shocking introduction to the premise and in many ways appears to be almost subhuman in presentation. It’s look is further enhanced with scratchy, skip framed moments also giving it a classic appeal.

Merhige was reported as sayings that for each minute of original film, it took up to 10 hours to re photograph it for the look desired. This look often tricks the eyes and contributes to the nightmare aspect that the director intended. The film lasts 78 minutes and even though the content may be disturbing it’s the effect on the eyes of the viewer that most likely requires a break from its experience.

Director Merhige has stated that this will be the first in a 3 part trilogy of which he is still seeking funding on for the next 2 follow ups. Begotten has often been cited on many of the most disturbing lists and cited by well known directors as favorite of there’s. Nightmares on screen can appear in all sorts if ways. Merhige has given us his version which is still highly effective today. 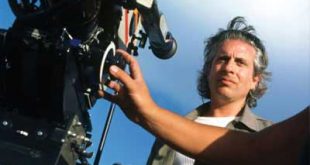