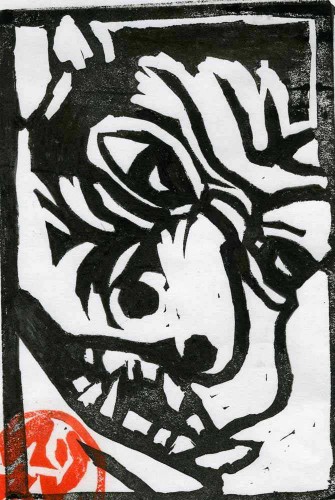 Oni stand taller and broader across the shoulder than any person you’ll ever meet. They’re heavily muscled and completely naked except for their tiger-skin loincloths and the heavy iron rings encircling their wrists and ankles. If you’re ever unlucky enough to come across an oni, you’ll notice among other things it has either one or two horns growing out of its massive head and its skin is some shade of red or blue. But one thing all oni have in common is their sharp fangs and claws, their enormous studded clubs, and their completely heinous dispositions.

I actually knew all of the above and quite a few other tales about these beast’s loathsome tempers and voracious appetites when, ten years ago, I took the blueprints of my new house to my mother-in-law for inspection. I was certain I’d impress her with the clever layout of our new home, so I was more than a little shocked when instead of kudos she gasped and pointed at my kitchen door.

“This is your kimon (oni’s gate or as it’s often translated, devil’s gate). You can never have a door on your kimon,” she said. “You can’t have a stove, toilet or bath, or even a sink, nothing to do with fire or water.” She pushed the paper away in disgust.

Before I asked the obvious question I asked this one:

There was one big problem though, the plans were drawn, finalized and the building was due to start that weekend. Somehow I didn’t think our contractor I was going to be thrilled to learn he needed to change a door into a closet. And why should he really? But the intensity of my mother-in-law’s distress over the whole issue got me worrying as well. I asked the question.

“So exactly what is a devil’s gate?”

And the answer lasted the rest of the night. Basically this is what I learned:

A devil’s gate is the northeastern direction. Easily found by purchasing one of the compasses designed specially for locating the kimons of houses, apartments, and office buildings. Traditional Japanese esoteric cosmology states that the kimon is the direction devils come and leave your house. My mother-in-law described it to me as the place devils rush into your home, steal all your luck and then flee. She went on by saying that anything related to fire and water (stoves and toilets, for example) are bad because they entice the oni. From there I listened to a bunch of stories about people she knew who had made the same mistake I was fixing to make, and all the ill luck, bad health, and lost happiness that ensued.

Upon further research, I learned that the idea of kimon came originally from China and that one theory asserts that it was from the northeasterly direction that the seasonal winds blew. If a door were placed in that direction the cold winds would easily enter; if, however, a toilet sat on the offending spot, well, bad energy (and stuff) would be blown throughout the house. Somewhere else I read that it is believed that in the northeastern direction ki/qi (energy) changes from yin to yang and back again making this a very delicate area that should remain as tranquil as possible – hence, the closet.

No matter how old the superstition is, the more I read about the devil’s gate the more I noticed how widely it was observed around me. I took note in friends’ and relatives’ houses and found all the northeastern directions either walls or — you guessed it — closets. It even explained the small wooden or cement shrines I so often saw in the corners of plots of land. It didn’t take a special compass to understand they’d all been set up on the northeastern corner.

We ended up calling the contractor and believe it or not he actually had a person in his office to deal with this exact problem. After a day or two of consultations we were told that if we don’t *use* the door we wouldn’t have to worry about intruding devils or horrible luck. Yeah, that’s exactly what I thought.

However, even that remedy didn’t convince my mother-in-law and she took us to visit an impressively old woman with certain powers. We showed her the blueprints and after my mother-in-law pushed an envelope of money across the straw-matted floor, we asked her advice. She removed one of those compasses from her pocket, grabbed a ruler and drew a line from the northeast corner of the house all the way down to the southwest corner.

“This is your kimon sen (devil’s gate line) and it is best to have none of the banned items (any fire, water or door-like things) within 15 degrees of either side of the line,” she said.

“The entire line?” I inhaled. This was just getting worse and worse as it went along.

“But at the very least,” she continued. “You should have nothing on the line itself.”

The edge of a sink and, of course, the door were argued about for almost an hour. My mother-in-law even brought up the dog’s water dish and expressed her concern over that transgressor. Eventually a decision was made.

“I will prescribe a talisman that you can hang on the door at all times,” the old woman said. “It will ward off the devils and any bad energy. You should be fine.”

I said nothing about if this had always been an option might it not have saved us a lot of time and worry (and money) if it had been brought up earlier. Instead, I smiled, relieved that at least my new house would be free of devils and I could get on with being excited about moving in.

“Also,” the old woman said as we were leaving, “Keep the dog’s water bowl as clean as possible at all times.”

It’s been ten years and we still have the talisman dangling from our northeastern corner. It’s quite pretty and has Sanskrit characters all over it, so I don’t mind. I’ve also found I don’t actually use that door very much so it remains closed most of the time. But most important of all, my mother-in-law seems placated and believe me her ire frightens me much more than a giant, half-naked ogre with a stick. As for the water bowl, that is an ongoing battle between a sloppy beagle and me. 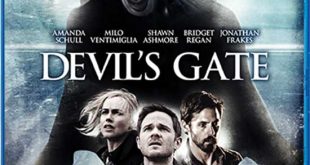