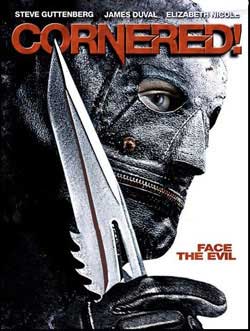 A serial killer with a morbid voyeur fetish is targeting and terrorizing convenience stores. He tortures and murders his victims in creative ways in front of closed-circuit television cameras, then steals the surveillance tapes as personal trophies.

With the reward upped to $500,000, the serial killer is the hot topic at a downtown Los Angeles liquor store owned by STEVE (Eduardo GarciaNo Country for Old Men).

When the beer deliveryman, MORTY (Steve Guttenberg – Cocoon, Police Academy, 3 Men and a Baby), shares his concerns about the recent killings, Steve and his motley friends fantasize about their big plans on what to do with the killer and the reward money.

As the night progresses, drunken fun quickly turns into heinous murder as players begin to disappear. Their only hope for outside help is eliminated when the resident bum, JACKO (David Jean ThomasG.I. Joe, Star Trek), is gruesomely killed.

Is there a way to stop the killer before he finds the basement filled with butchers tools and puts them to his demonic use?

A suspenseful who-done-it with a refreshing spin on the classic horror film, CORNERED! will have you squirming. Be warned and watch what you say someone may be listening!

From first time writer and director Daniel Maze, comes a new comedy horror piece titled “Cornered”. Cornered is far from your atypical slasher film that focuses on a group of individuals locked into a low rent convenience store and taken out incrementally by a local masked serial killer. Now your first impression probably was similar to mine in that the serial killer outfit resembles that recent film “The Collector”. Though while that film was thru and thru horror and torture p*rn this one takes a lighter but still dark side.

The individuals within consist of Peter Story as Jimmy the young store clerk who is caught in trying to go cold turkey over his drug problem while taking a rather paranoid approach to the c**kroaches that lurk within inside. Peter Story plays Donny or “Donny donut” who I believe is the sort of acting security guard there. Elizabeth Nicole plays Jess the local prostitute who uses the store as a sort of home base and gathering spot.

Ellia English is hilarious as Mona who runs a sex phone call line who while playing poker with the gang keeps interrupting with work related calls. Eduardo Antonio Garcia is Steve the store owner and Jimmy’s uncle who has a strange fascination with his in store security cameras. In fact Steve spends most of his time monitoring the customers and marking down items they have taken so he can catch them in the act or call them on past due fees.

The bunch in anticipation of this reported serial killer who has attacked quite a few local stores is in lock down mode to keep the bad elements out and to quarantine them all for a nice game of poker. The problem is, is that they end up losing the keys keeping them from leaving as well. When the serial killer shows up to be inside, he begins a systematic attack over each of the occupants. His choice of kills seems to be designed around the kills they described when discussing how they would kill “him”. 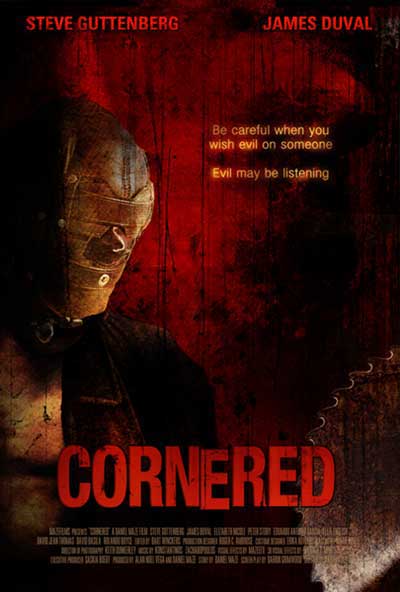 Though unknown to them at the time that the killer was in fact in the store in plain clothes. And added bonus to the plot includes a half a million $ reward for the capture of the killer. While that’s not a focal point it does work itself back into the discussions.

The team is not too bright and that’s what makes this entertaining. Jimmy in his withdrawal state hallucinates that the killer is a giant c**kroach in addition to the other bugs trying to get him. His mistake comes when he retaliates against his uncle and tries to leave the building running into the serial killer in the process. What follows after the fun moments is a pretty typical slasher chase ride. The serial killer chases Jess and Donny as they try and allude the killers rampage. Futile attempts to yell out the window, make phone calls and look for openings seems not to be an option this round. 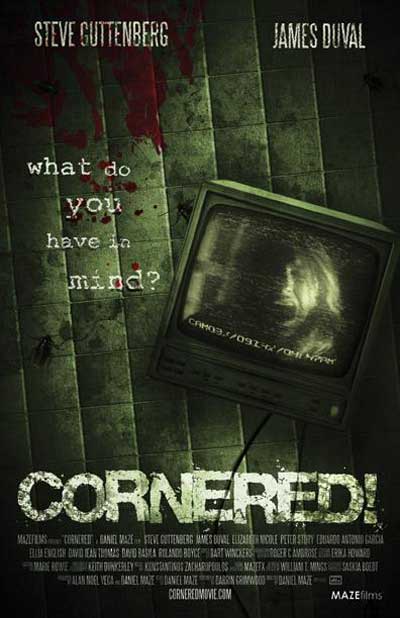 “Cornered” delivers in the sense of having an almost 80’s meets modern horror approach. The comedy is not overdone to take away from the horrifics so the film carries itself up until its surprise ending. And speaking of ending, I think I enjoyed that the most which avoided some common cliques and took a different route. Steve Guttenberg gives a pretty decent performance that seems to be a step out of his usual roles. His appearance in “Cornered” may surprise some who are used to seeing him in light hearted films such as “Cocoon” and “3 Men and a Baby”. I’m calling “Cornered” a decent mix of genres that works fine in what it sets out to do. The highlight comes in a cast of known and some what new faces bringing it full circle as a new horror product.